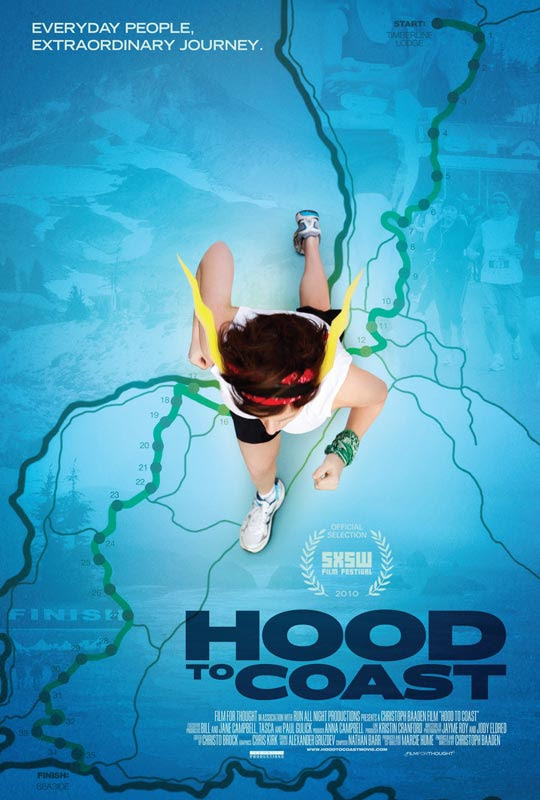 I went to go see the Hood to Coast Movie last night.  It certainly didn’t disappoint.  The “event” portion was a little lacking and didn’t meet my expectations at all.  However, the movie was great.  It was everything a running movie should be.  It was funny, inspiring and I even shed a tear or two.  Like Spirit of the Marathon, it followed participants of the race before, during and after the race.  I think there were more poignant moments in HTC and definitely more laughter.

The movie documents the Hood to Coast 197 mile relay in Oregon.  Teams start at Timberline Lodge* on Mt. Hood and run to Seaside, Oregon on the Pacific Ocean.  The course travels down steep mountain roads, through countryside, over bridges in downtown Portland, and over a mountain range to the coast.  Teams run all day and night and get little to no sleep.

Most runners have heard of long distance relays.  The Ragnar series holds races all over the country and is getting more and more popular every year.  But Hood to Coast was first.  Even the Ragnar race directors admit that HTC is the granddaddy of relays.  The movie really did a nice job of giving the viewer a sense of the history of the race.

This movie had special meaning for me.  I grew up in the shadow of Mt. Hood.  I heard about HTC through my dad, who either ran it or drove a van (I’m not sure which).  I remember thinking that it sounded like a cool event, even before I ever thought about running.  The race took me through my childhood.  They showed Sandy, Oregon, where my mom taught for years and years.  They showed downtown Portland where I would go to shop and enjoy the city.  The finish line and festival is in Seaside, Oregon.  I spent many weekends and vacations in Seaside, where my dad grew up and my grandfather lived.  Seeing the turnaround, really brought me back.  The inception of my marathon dreams was right there.***  Throughout the movie, I kept leaning over to Marci saying things like, “I grew up near there.”  I started to get pretty homesick.

The movie followed four teams throughout the journey of HTC.  There was a team of men who have run it for many years (one member had run it 27 times—every year it had been run) called Dead Jocks.  They were pretty darn fast for guys in their 60’s.  There was a team called Heart and Sole, consisting of older women.  They spotlighted one team member who had suffered a heart attack the year before.  While her story was inspiring, it was also a bit disturbing.  Her theme was of perseverance and determination, but it also conveyed a message that you don’t necessarily need to listen to your doctor—I was a little uncomfortable with that.  Another team, Team R Bowe,  was running in honor of their friend/family member who had passed away (tear jerker alert).  The final team was my favorite.  Team Thunder and Laikaning  were a bunch of non-runners who were more interested in beer drinking than training.  The two main “characters” provided the comic relief of the movie and, frankly, stole the show.

Last night was a special screening “event.”  They had a red carpet in Portland and had a simulcast** in the theaters.  The red carpet commentators were Runners World Chief Running Officer, Bart Yasso and producer, Anna Campbell. Neither of them will take jobs away from E! reporters for red carpet duty. LOL.   It is tough to get excited about people on the red carpet who we have never seen before.  I hope they post red carpet footage now, however.  I’d like to see some of the people from the movie now that I am emotionally invested in them.

After the movie, they had a panel discussion about the movie and the race.  Unfortunately, very few people in my theater saw it.  It was almost 10:30 when the movie ended.  The audience was comprised of runners who get up at o’ dark thirty to run every morning and it was past our bedtime.  The credits rolled and by the time the credits finished, most people had left the theater.  My friend Nadine left just so she could use the bathroom!  After the credits stopped rolling, the house lights came on and the screen was blank for a minute.  I had been looking forward to the panel discussion, but even I thought maybe they had cancelled it and thought about getting up.  I had to talk Marci into watching it with me.  They had advertised Bart Yasso, Mary Decker Slaney and Alberto Salazar.  Yasso and Slaney were there, but not Salazar, who is one of my personal favorite runners.  We watched for a few minutes, but we were pretty tired and the discussion didn’t seem to be going anywhere.  We left.  I hope they post the discussion today, because I would like to see it now when I don’t have a 40 minute drive ahead of me.

The movie alone was enough. We really didn’t need the “event.”  However, I believe that the “event” could have been more successful.  I think that each theater could have had a host or moderator.  That way the audience would have all known about the panel discussion afterward.  They could have even had raffle drawings to keep the excitement going (and give an incentive for staying for the discussion).  Leftover HTC t-shirts would have been a fun prize.  I know that the movie showed in 350 theaters, but they have a pretty active facebook page and could have easily found volunteers for each theater.  Nadine’s running club was there and one of the leaders could have done a great job moderating.  Even better (but a logistical nightmare) would have been a true live broadcast where we could have called in with questions.

I am so glad I went.  It was just the inspiration I needed.   I laughed, I cried.  I remembered how much running brings different people together.  I want to run a relay.  I want to run THAT relay.  Heck, I just want to run in Oregon.  It’s been a very long time since I’ve been home.

So if they do another set of screenings, I recommend seeing this movie. Otherwise, put it in your queue for Netflix or Blockbuster.  Better yet, buy the DVD.

*Timberline Lodge (the original lodge) was the spooky hotel in the movie The Shining
. 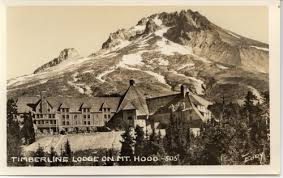 **I think that the live event was actually at 5:30 and we saw the taped version, just like the Oscars.  The east coast got the live feed at 8:30.
***They used to have a marathon in Seaside called the Trail’s End Marathon.  I remember my dad volunteering at this race.  I have a memory of running times from the finish line to somewhere inside the hotel.  I remember thinking to myself that I wanted to run that marathon someday.  I am sad to say that The Trail’s End Marathon held its last race in 1999.
Posted by Lisa at 10:14 AM

I loved the movie, too!

I was too tired to stay for the after show, though.

I LOVED the movie, especially after having participated in "The Relay" last year!