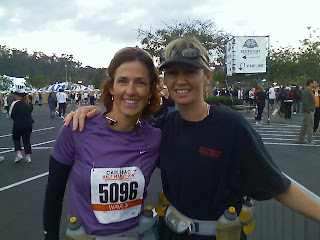 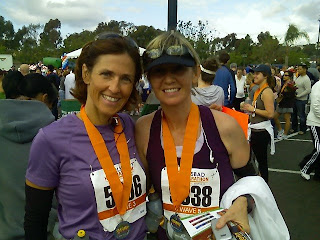 Before and After Pictures with Coleen

I am so incredibly impressed! Sounds like an awesome race for you!

Awesome Awesome Awesome!!!! Ok one more time AWESOME!!! You rocked it woman!! Excellent race!! I'm really bummed I didn't get to meet you!! One day!!!

Look at you with your bad-ole self. Congrats on a really awesome race...you were smart the whole way!

Yeah...the reason you didn't see me was because I was two waves and about 35 minutes behind you :-)...we'll figure it out next time

CONGRATULATIONS!!! That's a really FAST time. Great race report, I can feel the excitement from the race while reading it.

WOW!! Congratulations!! Nice to see you ran a personal best. Sorry to see it was so "cold" at the start, says I sarcastically! Now you have me "pumped" to run my next half marathon in April. A final "WOO-HOO" for you!! :-)

Girl you have earned the right to gush, so hell, if you want to write another race report with more details, I'll read it! I'll read it!!!

Isn't "free speed" awesome?! YOU DID SO AWESOME, I AM SO PROUD OF YOU!!

And yes, I would have laughed to see people in tights, and long sleeves, etc.

I'll have to weigh my "base layer" and tell you how much it weighs. It's not the type of long sleeve shirt you guys probably wear in Southern CA (and which I can only wear until October, sadly.)

I'm going to have to put this race on my calendar next year. Sounds like a fun, fast course. I really enjoyed reading your race report. I agree, music can make a huge difference, especially new music that you haven't heard that many times while running. Congrats again! I'm so happy for you!

You go girl!!! Awesome job - you should be so proud of yourself! :)

You are a total rock star!

I run to Avril's Girlfriend sometimes too... it is peppy and good energy for that effort!

This does sound like a great race and I'm interested in trying to do the Carlsbad, La Jolla and AFC series sometime. They're close enough to Vegas that it wouldn't be a huge travel ordeal either!

Again, I am so thrilled for you and so impressed with your splits. (Especially as I feel myself getting slower and slower.) Your race photos are fantastic, too!

Wow! I just came across your blog (linked from akaAlice) and really enjoyed reading about your race.

I'm aiming to shave some time off a 1:59 finish at my next half, so it's quite inspiring to hear about your race.

Coming out of blog hibernation to say congrats! I am beyond impressed!

And um, I'd kill for 53 degrees right now. My car said 5 degrees this morning! Heading to La Jolla (I think in your neck of the woods) next week so excited for better weather!

I've just gotten the ok to start running again, why does it make me so nervous ? LOL