Yesterday I enjoyed something new--time to myself without an agenda. My daughter started preschool last week (sniff, sniff) and on Tuesdays both kids are in school until 12:30. I have earmarked Tuesdays to run errands without kids (Costco, grocery etc.), but yesterday I decided to take advantage of the time to do something just for me. I went running and I really needed it.
Have you ever had a day when it felt like tears were right at the surface all day long? Men, you can ignore this question, because I am pretty sure you haven't. That is how I felt all morning. The tears were right there behind my eyes just waiting for the right stimulus- a song, commercial etc.- to get them going. There is a lot going on in my life right now and I was thankful to have a few hours to forget about it. Normally Tuesdays are an easy run (three miles or so), but I decided to do my tempo run that is scheduled for Thursday. That saves me a really early morning on Thursday.
My day was probably opposite of many of you out there. Terri wrote about her twenty-two degree run and upcoming zero degree run. Ummm... well.... instead of looking like the Stay Puft Marshmallow Man or Stewie Griffin, I wore a tank top and shorts. While this sounds wonderful, it was actually difficult to adjust to the heat after wearing running tights and arm warmers a week or so ago. OK, who am I kidding? It really was nice, even if I am not used to running in the heat anymore. I popped an endurolyte*, made sure I had some water and off I went.
It was a hard run since I am not used to pushing myself so early in the week. But, oh SO therapeutic. You know what?? When you sweat a lot, the tears that are so close to spilling disappear! I think it might be impossible to cry while you are running a tempo run. Add the new playlist turned way up and my brain was in a perfect bliss of no thoughts. Well... I actually thought about random things and even some of the other bloggers out there. I thought of poor Terri in her Stay Puft winter gear. I thought of AKA Alice and whether or not I would cross paths with her while I was running at Lake BP. I thought of Oz Runner as I remembered when I was living in Kansas. I thought of Penny and how much she and Velcro must be hating running in that heat. It was nice to think of random thoughts that had nothing to do with real life, at least my real life.

Then I saw some signs. Some positive omens, if you wish, that helped me realize that everything is going to be ok. I am not overly superstitious or anything, but there are two things that have very positive meaning for me: butterflies and birds (particularly birds of prey). As I was zipping** around the lake, a butterfly flew right in front of my face. It instantly made me smile. I saw several other butterflies during my run. I thought about the migrating Monarchs that I loved so much when I lived in Topeka. It was an amazing sight to see. It was actually difficult to drive in the afternoon because I didn't want to hit any of them. It was a simpler time back then, but not better. My life is so much more full now. I have a wonderful husband and two fantastic kids. 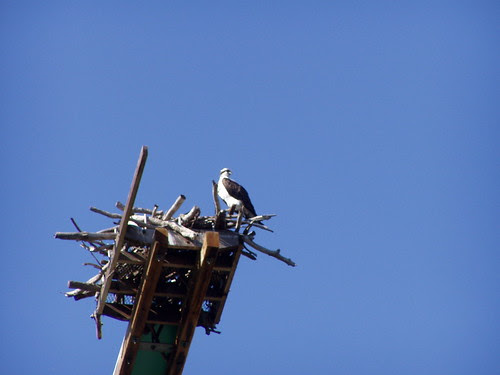 The second thing I saw that struck some awe was a large osprey. It was pretty incredible. It was sitting on a huge nest on a power pole. For those of you living here, if you look up around mile 2, you'll see the nest. I never knew there were osprey at Lake Murray. I saw one once at Mission Bay. It was really cool to see such a magestic bird. I have always told myself that if I see a red-tail hawk in the morning, it would be a good day (this happened a lot when I lived in Kansas). Ospreys are more rare than red-tail hawks... so it must mean something good, right?
Between looking for good omens, sweating out any lingering tears and later re-reading Terri's post about optimism, I feel better about things. That hour run was better than therapy. I think I might want to do some hard runs over the next couple of weeks.
I hope your running gives you all good mental health.
#pictures courtesy of monarchlab.umn.edu and flickr

*For those of you who use endurolytes (Terri, Alissa) how many do you take? I took one before my seven mile run and one after. I did sweat more than I have in a long time. I got that headache later this afternoon and wonder if maybe I should have taken more or if I was just dehydrated. Hmmm....
**I felt pretty darn zippy! My average pace for seven miles, even with a non-pace warm up and cool down, was 8:43!
Posted by Lisa at 2:35 PM

running in tank top and shorts? difficult to adjust to the heat?

I don't think I'd have any problems adjusting ( ; I ran with gloves, knit cap, sweats, and three layers this morning....you remember Kansas in January right?

Sounds like you had a nice meditative run. And it was cheaper than going to a psycholigist. ( ;

I wish I had read this this morning before I posted!!! I'm sorry you are going thru similar crap!!! It sucks! But how inspiring that you went out and saw such inspiring promising things!!! I agree-I feel things will work out....but right now it SUCKS!!!

Did you cry? Because I've been crying all day! And I'm now going out for my second run of the day!

Thanks so much for sharing!!!

Oh...I'm certain that we'll run into each other at Lake BP one day...although it'll be more likely that you'll be running past me...8:45 pace...Wow. That's my full sprint speed!

I always think January is the toughest month. The holidays are over. Money is tight. I know you're going through a rough-patch w/the hubby's job (me too). That makes it even more difficult this year. Thank goodness for running and blog-friends. I LOVED the pix you took.

I'm off to Lake BP for a good run right now. I need some of your therapy :-)

Lisa, I have definitely felt that way, like I'm ready to burst into tears. For me that was when they told us about budget cuts, and I wigged out thinking I could lose my job. (I'll write you separately on facebook.)

About the endurolytes, it depends on the weather, and how much you sweat. On some days I took as many as 6 an hour (2 every 20 minutes) but I sweat like the devil, and also a lot of salt.

I am glad my post could help you, and also that your run made you feel better. You are right - crying and a tempo run - might be impossible to do at the same time. :-)