It doesn't suck to live here!

At the risk of being boo'd by the majority of readers out there, I am going to gush a bit about San Diego weather. It was f'ing AWESOME this morning! I think it was in the high fifties/low sixties when we got to the beach at 9 a.m. for a Stroller Strides class. It was over 70 when we left at noon. I got a great workout pushing 100 pounds of kids and stroller up a mammoth hill along with upper body exercises that kicked my butt (I was a participant today, not an instructor).
Ironically, we also did some killer butt exercises!
As I was hanging out after class while my kids played in the sand and water, I watched surfers, divers, swimmers and even some dolphins in the cold water. I was riveted by the swimmers. There were at least a dozen people doing open water swims this morning. There didn't seem to be a race or anything, but there was a least one organized swim (there were a couple of kayaks going along with some of the swimmers). I think I have mentioned here before that I would love to do a triathlon. I am confident in the running part. I am pretty confident that I could train easily for the bike part. The open water swim freaks me out. Don't get me wrong. I can swim. I actually think I am a decently strong swimmer. I swam some decent distances in the Caribbean on our honeymoon. I feel confident while snorkeling etc. BUT, the Pacific Ocean, so dark and blue, intimidates me. A lot. Maybe I can do one in the Caribbean, since that crystal clear water is the only place I feel really confident. I even get a little weirded out in lakes (it's the fish below me, I think).
My friend, Jen, is a former collegiate swimmer and badass in the pool. She is a lifeguard (the beach kind, not the weenie rec pool kind*). She is going to train me (once we can get our schedules figured out). She assures me that she'll have me swimming through the waves in the Pacific in no time. Today would have been the perfect day for it. There was little or no break and the water looked really calm (maybe that is why there were so many people out there). The water was cold (about 56 degrees), but there were plenty of swimmers that were not wearing wetsuits. Not me. I was cold standing on the beach watching them. It got me ready to start working out in the pool.
Here are some pictures from our morning at La Jolla Shores. The kids had a blast. I didn't think it would be warm enough for playing in the water so I didn't have the appropriate attire nor did I have a change of clothes. Luckily, I had towels in the car. They rode home in their skivvies. 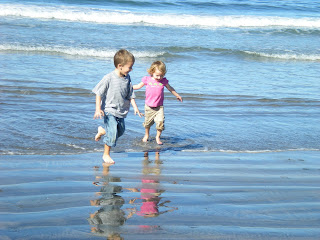 Can you believe this is January??! 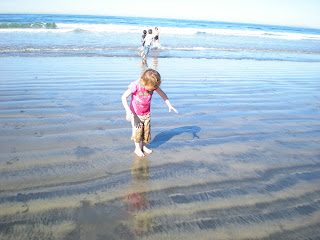 Oops... she fell down. That didn't slow her down. I had to drag them away from the beach so that we could go eat lunch. I was STARVING. 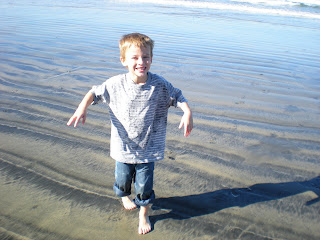 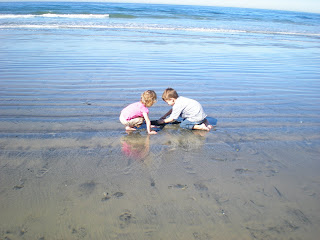 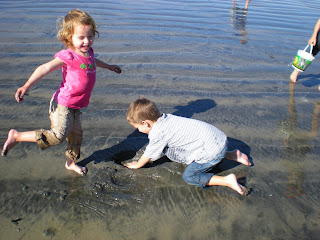 They love to dig in the sand and stomp around

I sure do love it here.

*not to say that rec pool lifeguards are weenies. My mom was a pool lifeguard for years and she is the one that taught me to swim. It is just that at the pools, it seems like all the lifeguards do is blow their whistles. One time at the YMCA one actually jumped in after one of my kids (long story) and she looked genuinely annoyed to have to do so. Jen says that she has had days at the beach when she has gone into the water DOZENS of times. A true rescue in the ocean is life and death. My point is that if anyone is going to take me out into the ocean, I want it to be her ;-)

Saw your blog via Stroller Strides reference! I've gotta say I'm jealous! I'm in Houston and while our weather has been nice, our beaches, well,...they don't look like that! I do love Cali!

I won't boo you, but I will admit to being envious of your weather and proximity to the beach!

GRRRRRRR!! I live in Connecticut, as you know. I'm SO jealous!! Glad you had quality time with the kids. Have fun with them while you can. Before you know it, they're 26 and 23 years old, like mine are.

I am so jealous of your weather! My brother lives in SD, so hopefully I'll actually get out there some winter to enjoy that weather.

I agree...it was a beautiful day. I continue to marvel at the Santa Ana's in January...I always think, "I this normal?" but it is for here.

Great day with the kiddos. I know the hills you were walking around La Jolla Shores...they're killer.

I'm excited we will be training basically the same time for our spring marathons. Looks like we are both using SmartCoach loosely.

It was warm today!!! Sometimes I miss a winter season!!

If it makes you feel better swimming in the ocean freaks me out too! It's the only thing holding me back from doing a tri! I can swim I just don't like it!

Well my firend you know I only comment on a few but this was screamin, "Jen say something". Yes it was a gorgeous day. So glad you had a chance to do SS at La Jolla and YES it is time to get swimming!!! At least to jump in the pool so we get some fundamentals under your belt. I mean you are conquering the athletic world on every other avenue why not swimming too. How about this, you drag me along through this marathon training and I drag you to the pool and yes the dreaded ocean? ;) You can wear a wetsuit though due to lack of a natural one. LOL

I won't boo you either, but I sure love that weather.....man, I wish Kansas was closer to the beach (I mean the real beach, not the lake beaches we have here)....

I would like to do a tri some day too. The swim freaks me out. I need to find a life guard friend to teach me.

Can you feel the jealousy across blogland and the country??!!!!!!!! Oh My God. Summer is only 6 long months away for us!

Your kids look like they are having a blast. Thanks for sharing those pics and letting us live vicariously through you!

And yes, I would be scared to death of the swim part too. I sink.