I have a Turkey Trot streak going.  Since the year I first started running (2008), I have run a Turkey Trot every Thanksgiving.  My first was rainy. My second helped a friend reach a 10K goal. I saw a PR in my third. And this year was all about my kids.

I have been suffering from a lack of motivation lately. Since St. George, I haven’t done a lot of running (or blogging for that matter).  I did run a half marathon with my friends (race report will be posted soon), but I haven’t done much running beyond my weekend long runs.

So when plans for the local Turkey Trot were being made, I wasn’t super excited to race. I am not in racing shape. It is funny, I am happy to run a half marathon not in “racing shape” but not a 10K. So when my eight-year-old asked about running, I was happy to commit to run with him.During my normal motivation mode, I would have run to the race, raced it, and then run home. This was a bit different for me. I ran with him on 4th of July when I was injured and enjoyed myself immensely. I knew we would have fun again. The difference this year is that his younger sister begged to run as well. Luckily, they were hosting a kids’ run right after the 5K.

We got to the park around 6:45 to register for the event. I saw my friends who were running the 10K. Oddly enough, I didn’t feel the slightest twinge of jealousy at them running it. I was really looking forward to running the 5K with my son.* He was pretty excited!

We lined up at the starting line and were ready to go!

I forgot to bring my Garmin. It was a good thing. I think if I would have slowed him down. He was running pretty strong and fast.

He was getting very tired in the last mile. I tried to give him encouragement the entire time. I told him how proud I was of him and encouraged him to keep it up. I also let him know that it was ok to take walk breaks. I was pretty sure he was running at a faster pace than he ran in July. I saw something in him I hadn’t seen. Around the second mile he started looking at his watch. He wanted to beat his previous time!  In the last mile, I actually told him to stop looking at his watch.  LOL. Like mother like son. 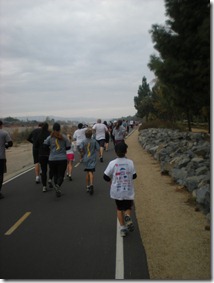 We merged with the 10K race and ran on the river trail path, one I know very well. He was great.  Whenever he wanted a walk break, he would move over to the dirt so he didn’t get in anyone’s way.  He is learning race etiquette early!

When we saw the finish banner, I encouraged him to finish strong.  And he did! He turned it on and kept it going until the end. I was so, so, so proud of him. 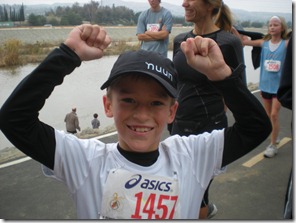 Early in the race, he told me that he wanted to run the 1K Kids’ Run with his little sister. After pushing himself that hard, he asked if it was ok if he didn’t run with his sister. I think he deserved to take a break.

My husband showed up with my five-year-old  She was so excited to run her “very first race.” She wanted to run it with her brother, but when we explained that he was pretty tired, she quickly became excited to run with Mommy. 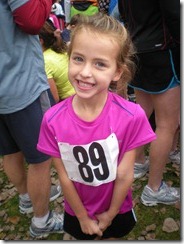 All the kids lined up.  They yelled “go” and we were off. She looked at me and said “this is so fun!”  Man, how many times can a mom’s heart melt in one day? 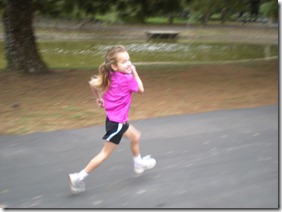 In one kilometer, she went through all the emotions runners experience during a race. I wish I would have videotaped the entire thing for her to watch someday. In the beginning, everything was fun and easy and she was carried by adrenaline. 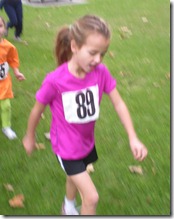 The route went up a slight hill and she said “I can’t do it!” “Of course you can,” was my reply. And she pushed her way up that hill. She laughed as we ran down that small incline. There was a water station near the halfway point. She stopped briefly, sipped some water and had a look of renewed determination as she started running again, her body language saying “I can do it!” On the 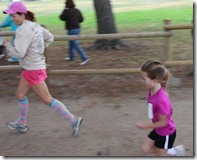 home stretch she was having fun again (second wind?). As we sprinted toward the finish line, she said, “this is easy!” Isn’t that the feeling we all get at the end of a race? LOL. 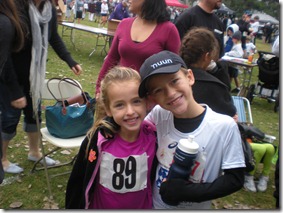 It was a great morning! We went home and hosted a fabulous dinner** My daughter was overheard saying several times, “this is the best Thanksgiving EVER.” I would have to agree, my love…I definitely agree.

I hope you all had a wonderful holiday and enjoyed your own tradition, whether it be a Turkey Trot or something else.

*In July, he asked me if he could run the 10K on Thanksgiving.  I told him if he trained for it, he could. Since he hadn’t done any real training, he could only run the 5K.

**I had eleven people for dinner and cooked the BEST Thanksgiving turkey I have ever done. I used a fantastic brine from Alton Brown. I did most of my cooking on Wednesday and had a schedule for Thursday that kept my time in the kitchen to a minimum.