It wasn’t a bad race.  I didn’t set any PR’s, nor did I improve my time from the same race.  However,  Saturday’s race was more about my running buddies than it was about my own accomplishment or lack thereof.  It still goes down as one of my favorite race days.

We all met at 6:20 at Rod and Lori’s.  It was our entire running group except for Caitlyn, who is injured.  The weather was cold, but looked like it would be perfect for running.  We were parked and walking to the starting area just after 7.  We had plenty of time to pick up gear*, use the porta potty and get psyched up for start of the race at 8.** 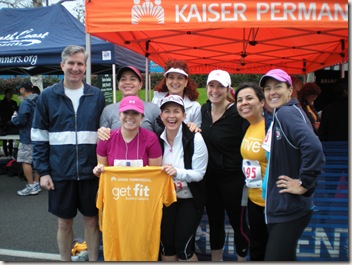 Rod, Kelly, Shannon, Stacey, Sandra, Me, Odessa and Lori before the race.

Me, Stacey and Shannon before the race
The race was definitely bigger than last year.  But I think it felt bigger because we were pretty far back in the pack.  The first couple of miles were pretty crowded.  There was a lot of weaving during that first mile.  Rod, Kelly, Stacey and I started together.  Shannon, Sandra, Lori and Odessa started out more slowly.  I knew within the first couple of miles that it wasn’t going to be a PR kind of day.  I debated whether I should just get comfortable and stay with Stacey or Kelly throughout the race.  Both of them told me to run my own pace.  I decided that since I paid for this race, I would see what I could do—PR or no PR.  I was hoping to run it close to the pace that I ran it last year (1:49) After a mile or so, Stacey decided to pull back into a more comfortable pace.  We had been running under 9 minute miles and were starting to speed up a bit (the second mile was 8:17).

A little later, Kelly fell behind.  As Rod looked back to see where she was, Kelly yelled, “don’t look back for me, run your race!!!”  We had our marching orders.  Kelly fell further and further behind us. Kelly is “running happy”
This race is a series of out-and-backs.  I enjoy out-and-backs when I am running with a group of friends.  I was able to see everyone at least once.  There is a long stretch where we ran on a bike path along the river, crossed over a bridge and then back along the other side.  I was able to see all my friends.  The course isn’t particularly scenic, so I doubt I would ever want to run it by myself.  But with a group, it is a nice distraction to look for all your buddies. 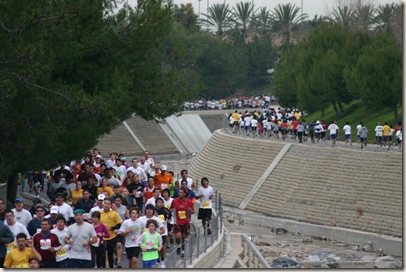 The crowds on either side of the river
All the out-and-backs made it a perfect race for spectators.  Mine and Stacey’s husbands decided to ride their bikes down to the race and take some pictures of us.  Our kids spent the night with relatives and Kenny and Alex started their twenty mile bike ride just after we left for the race.  They arrived just before the beginning of the race.  In fact, they were getting off their bikes as the starting horn sounded, so they didn’t have time to film us at the start.  However, they were able to get some great pictures during the race. 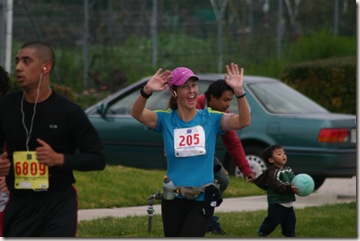 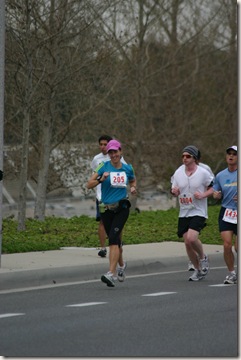 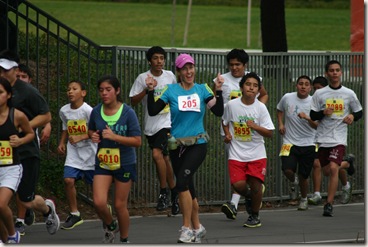 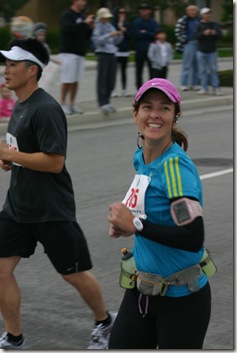 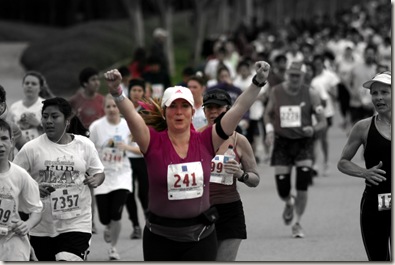 He was able to get a great shot of Stacey.  I played around with the color and got a pretty cool picture.
It was great having my hubby there.  He doesn’t get a chance to see many of my races.  It is just too hard with the kids.  This course also allowed me to see him four or five times. 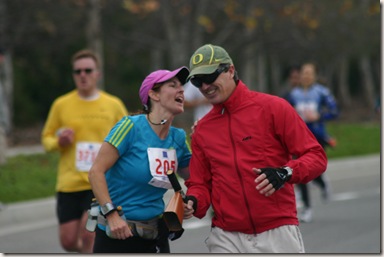 The next miles were a struggle.  I knew that my sub-1:50 was gone, I debated with myself if I should stop and wait for one of my friends and finish with her.  I wasn’t sure if Kelly was in front of me or behind me. At the next turn-around, I saw that she was several minutes behind me.  I knew that she would be angry with me if I stopped and waited for me.  I saw Kenny.  He told me that Rod was two and a half minutes ahead of me and urged me to push it.  I decided to see if I could pull out a decent time.

I finished with a pretty good time.  Despite spending two minutes in the porta potty and feeling sluggish for the last four miles, I was able to finish in my half marathon “sweet spot”—1:54.  Since my first sub-two half marathon of 1:52 in January 2009, most of my half marathons have been between 1:53 and 1:56.  I was pretty happy with my time, considering how crappy I felt physically. It didn't really matter because I still had fun. 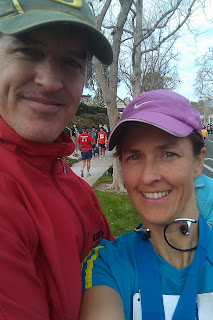 I quickly found Rod (who finished in an outstanding 1:47!), Kenny and Alex (Stacey’s husband) to wait for the others.  We were watching for Kelly, but I missed her!  She finished three minutes after me.  This was her second half marathon and she took eight minutes off her last time.  She finished with an incredible 1:57!!  I am so proud of how far she has come.

Stacey was the next one to come down the finish lane.  She looked intense.  She looked down at her (new) Garmin and I yelled, “don’t look at your watch, just RUN!”  She didn’t hear me.  She was listening to music and focused on the finish.  She finished in 2:09, which is five minutes faster than her first half marathon in October.

Sandra came in next at 2:25.  This was Sandra’s very first half marathon.  She finished strong and with a huge smile on her face.  I was so happy for her; she was thrilled with her experience.  I am so happy to help yet another first timer successfully cross the finish line!

Sandra told us that Shannon’s knees were bothering her.  We were watching closely for her to round the corner.  I had made Shannon a 2:30 pace band and I was hoping that she would make her goal.  She came down the stretch and looked like she was ready to be done.  Stacey, Sandra and I ran out into the road to join her.  At first, she waved us off.  But we cheered and yelled her name.  The four of us ran across the finish line together and it was so much fun.  She told us later that our running with her gave her a huge high that she will never forget.

Finally, Lori and Odessa finished.  Rod had run back about a mile and came in with them.  We all cheered them in and had a great time afterward.  The food situation was pretty goofy though.  Runners queued up in a line and went through like a cafeteria.  They took one of everything and even had boxes and bags to put it in.  I just wanted an orange and a banana.  I didn't want to wait in the silly line.  So I walked up to the box of bananas, reached between two people, grabbed the banana and walked away.  Done.  There didn't need to be a line.  If everyone did that, everyone would get food after the race.  Plus, the food area was separate from the finish area, so it was being used by spectators as well as runners.  Their selection was great (cookies, muffins, fruit etc.), but the line thing was annoying. 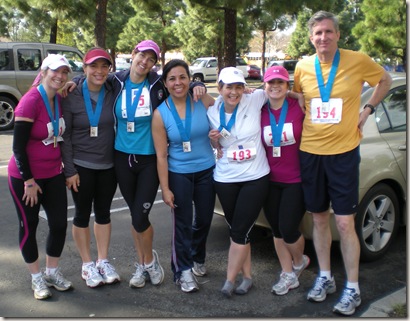 
This was such a fun race.  One friend ran her first half and three others had significant PRs.  I am so proud of everyone and feel privileged to run with these ladies (and Rod too).  Even though I didn’t have my best race, I will always remember this race as one about my friends and their accomplishments.

*Stacey’s husband had picked up our bibs and shirts for us, but the rest of the group had to get theirs.  Stacey and I both exchanged our shirts for smaller sizes.
**It turns out that we should have moved into the starting area earlier.  The first mile was very crowded and we had to weave around slow runners and walkers.
***I did my normal morning routine.  I went to the bathroom the magic number of three times.  This is exactly what happened in the Long Beach Marathon, America’s Finest City 2008 and Rock ‘n Roll 2008.  I may start experimenting with Immodium. Does anyone out there take Immodium before races?  If so, how much and when?  Also, I usually eat an English muffin before a race and I realized that they are whole grain.  That might be the problem.  I think I might also switch to bananas before long runs.
Posted by Lisa at 9:22 PM

Nice race! The picture of the crowds though - I don't remember if being that crowded whine I ran it two years ago. Nice though, since it raises funds for the local High School.