On Wednesday, my sister called me telling me that a blog she follows on Facebook (called Fit Bottomed Girls) was having a contest for a free race entry in Los Angeles.  My sister, who lives in Portland, was the first to comment and won the entry for her race-crazy sister.  Woo hoo!  That is some great serendipity!!

The race was the 13.1 Los Angeles, which starts an hour’s drive from my house.  As my alarm went off at 4:15, I was wondering why I decided it was a good idea to run that race.  I was driving by myself and racing a friend who was running in a different state.  I’m crazy.

I arrived in Santa Monica just after 6 a.m.  The race started at 7:13—I had plenty of time.  I’m so glad I got there so early.  It took over twenty minutes to get into the parking lot and park.  I desperately needed the bathroom after the long drive.  There were four porta potties in the parking lot with a pretty long line.  I wasn’t sure how far the start line was or how many potties there were and decided to wait in the line.  It took a half an hour.  Yikes.  It was getting close to race time.  In fact, it was close enough that I decided to leave my drop bag in my car.  It was starting to warm up, so I didn’t really need my jacket any more—it was looking like it was going to be a gorgeous day in Southern California. 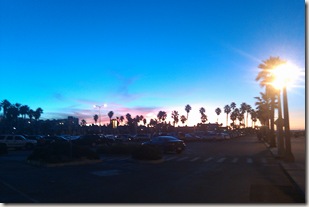 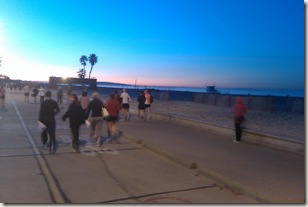 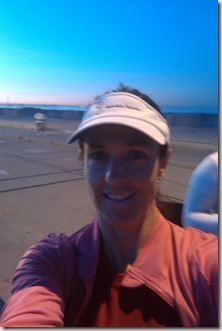 I made my way to the starting line.  I had just enough time to make my way up to the 8 minute mile corral.  A few minutes later, they played the Star Spangled Banner and a few minutes after that, we were off! 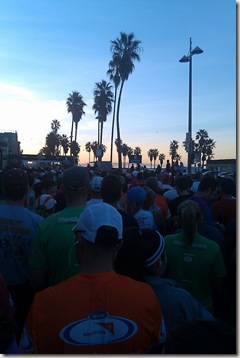 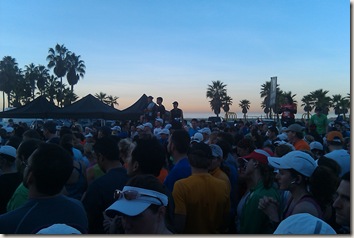 The race started out along the boardwalk.  All the shops were closed.  It was a bit eerie to see all the tattoo parlors closed with an array of characters watching us.  Some of them were cheering, but most were muttering to themselves or saying strange things.  They definitely weren’t your typical race spectators.  I had a picture in my head of the guy in Pretty Woman chanting, “welcome to Hollywood, what’s your dream?”  We weren’t in Hollywood, but I imagine there were plenty of dreams in that crowd.

After running along the beach for a mile, we turned left onto Venice Boulevard.  We ran straight on this road for six more miles.  This definitely isn’t the most interesting course I have run (there is nothing along Venice Boulevard as you run away from the beach).  But there is something to be said about the lack of turns.  Because it was such a long out-and-back, we didn’t get to see the leaders for quite a while.  The winner was way in front of the pack and looked awesome.  I am always surprised how easy they make sub-five-minute miles look.  He ended up finishing in 1:05.  Wow!

The race tried to keep it interesting, however.  There was a girl twirling a large baton of fire.  There were a couple of drum troupes and bands along the way.  There weren’t as many characters running as you would find at a Rock ‘n Roll event, but everyone seemed to be having a good time.

I started feeling very tired and sluggish in the tenth mile (8:25).  My stomach was starting to bother me [again].  I had changed up my routine and had a banana and taken an Imodium before the race.  By the end of the eleventh mile (8:20), I realized that it wasn’t working.  Unlike last week’s race, I only had two miles to go.  Last week, I had over five miles left and had to find a porta potty.  Yesterday, I decided to tough it out for the last two miles.  They were two of the toughest miles I have run.  I would feel myself slow down, look at my Garmin and see my pace slip to 8:40.  I was tempted to go with it.  But I had come so far with a great pace and I knew I would regret slowing down.  I also knew that the faster I finished the sooner I could get to a potty!  Mile 12 was my slowest of the day at 8:26.  I was able to push the pace back to 8:15 for the last mile.  I kept looking at my Garmin, telling myself, “you only have eight minutes left,” “only six minutes until you are done,” “less than a half mile; that is only one song!”  I was SO ready to be done.

In the final stretch, my water bottle fell out of my belt (for the third time of the race—stupid water belt).  When it has happened in the past at the end of a race, I have left it.  This time, I actually stopped to pick it up.  I wasn’t running particularly fast and I didn’t feel like coming back for it later or buying a new one.  I picked it up, and pushed across the finish line.  Maybe, if I wouldn’t have stopped, I might have finished with the clock reading under 1:50, but it clicked over as I was approaching.  That was ok, since I had started a minute after the gun.  Woo hoo!  SUB 1:50.


They had some great food afterward.  The sausage and chili didn’t seem too appetizing right after running a race in 70 degrees.  However, the Italian shaved ice was yummy!  As I was deciding which flavor to pick, another runner took one of the last ones.  Then a little kid pushed his way in and TOOK THE LAST ONE.  I was really bummed.  We were in the runner finishing area, not the finish festival.  When the volunteer told me that he had already had a couple, I was annoyed.  I told her that I might resort to elbow checking him if he took mine the next time.  Luckily, they brought more and there were no brazen children taking treats from tired runners. 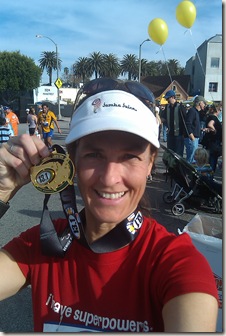 I enjoyed the after party.  I took a few pictures and even took advantage of the free massage afterward.  Just what I needed before a long drive home! 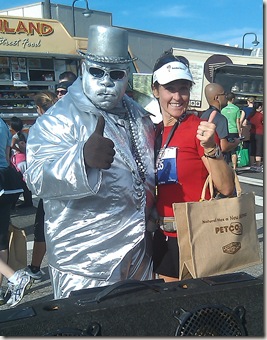 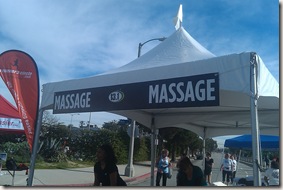 After hanging out for a couple of hours (the line for the massage was pretty long), I made my way back to my car.  It was further than I realized since the finish line was in a different spot and much further south than the start.  I also didn’t realize that the walk back would be so interesting.


I have lived in California for nine years.  I have lived in Orange County for a little over a year.  But I have never been to Venice Beach.  My exposure to Venice is limited to movies like LA Story.  But I never realized it was such a FREAK SHOW.  I know this is a race report, but it would be complete without a report about after the race.  Since many of my readers aren’t in Southern California, I thought I would share a little about the sub-culture that is this little Los Angeles beach community.
At first it reminded me of any beach town in Southern California—Mission Beach, Pacific Beach etc.  There was the requisite surf shop. 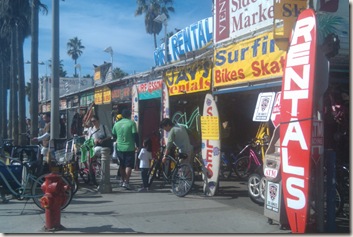 And a nice park on the beach. 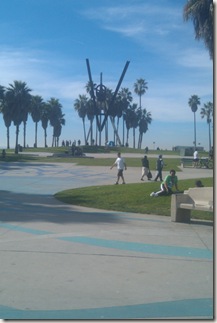 Then there was an entire fence with the saying “who in the heaven is Larry.”  So random.  It turns out it is a restaurant. 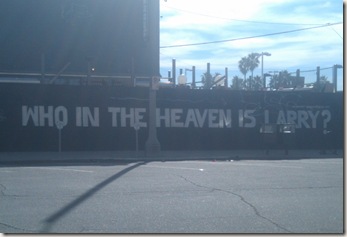 And then it got weird.  It went from a typical beach boardwalk to some strange underworld.  There were tattoo parlors, head shops and stores full of oddities. 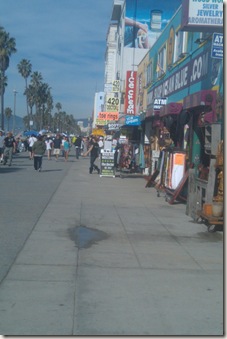 And vendors selling everything from t-shirts to pipes to jewelry…you name it. 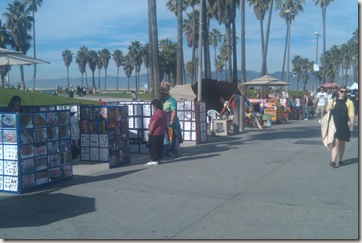 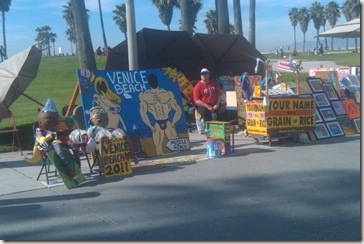 I started smelling a fragrant aroma.  I think I actually got a bit of a contact high.  Then I noticed plenty of places that supply that aroma.  Now if I ever get glaucoma, I’ll know where to go… 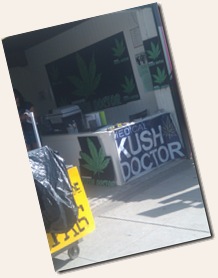 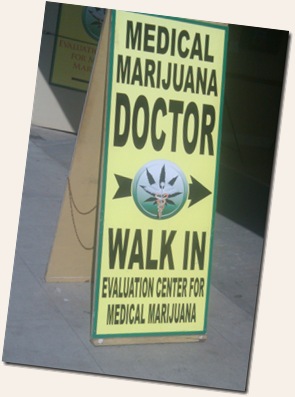 The thing that clinched this place as a freak show was an actual freak show.  A guy was standing out front bragging about his two-headed turtles (which were in a tank…I saw them…freaky) and the five legged dog. 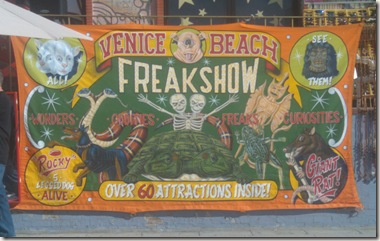 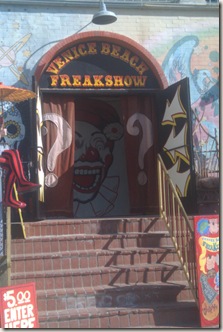 So that was my full day (all before noon).  I ran a great race and enjoyed some of the oddities in Los Angeles.  Oh…. and Nadine is buying me breakfast!  She ran a great race at the Rock ‘n Roll Arizona and finished her half marathon in 1:50:20.  She ran negative splits!  I really have her to thank for my finish time yesterday.  If it weren’t for her challenge, I wouldn’t have pushed.

Yeah for free race entries!  Yeah for beautiful Southern California days!  Even though I ran the race by myself and it wasn’t the kind of fun I had last week, I had a really nice time.

You're right, there is nothing quite like Venice Beach!

I'm so glad you got to do this run and experience the craziness that is Venice Beach. I love to live that stuff vicariously through you while I spend another gray day in the Oregon 'burbs. Hooray for the Fit Bottomed Girls on Facebook! :-)

Congratulations on a great race and a second best time!

I'm sorry about the shaved ice, though - what a bummer!

Great race and always great to accomplish so much before noon! I would've been very disapointed with teh shaved ice situation as well!

Another free race! And we're not even three weeks into 2011 and you've already got two half-marathons under your belt? How awesome is that? Congrats on running such a strong race.

Nice work! Awesome time and great job pushing through, you are truly amazing!

And the freaky stuff you saw post-race? That's pretty awesome too! Now I want to go check out Venice Beach, just to see the oddities!

Ooh kids taking food at the finish is a huge peeve of mine - especially in the finishing area! Grr. Control your offspring people, this isn't a catering for your family.

I've only been to Venice once or twice when I was younger and I definitely remember it was full of freaks! lol