If you have been following me for a while, you might remember that I ran for Team Jamba over the summer.  I was chosen through Active Ambassadors.  Of the 100 Jamba Juice Ambassadors, several of us were called and asked if we would be interested in taking the ambassador program one step further.  I drove up to Santa Monica to interview with a PR/advertising agency.  Three of us were chosen to be the Ambassadors of Wow!  The coolest thing is that Nadine and I became friends through Team Jamba and are super excited about working with each other.  We met the third Ambassador, Felipe, at the LA Eco Mud Run and he is a really nice guy.

We recently had a photo shoot up in Beverly Hills.  Other than battling gruesome traffic in LA, it was a great experience.  I have never done anything like that.  There was hair, makeup and wardrobe.  There was even a food stylist.  We had a couple of wardrobe changes and I posed with both oatmeal (my personal Jamba Juice favorite) and a probiotic smoothie (they let me drink it afterwards--yummy!)

Today was the launch of Jamba Juice’s Ambassador of Wow campaign.  I checked the website several times during the day.  When it finally went live, I was so excited. 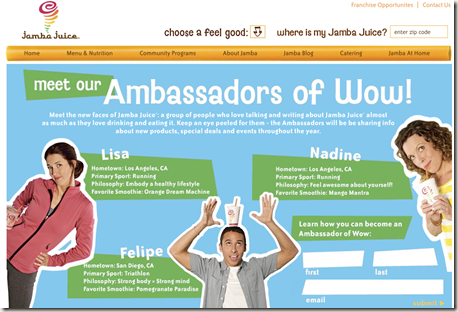 Over the next several months Nadine, Felipe and I will be Jamba Juice spokespeople.  I don’t have a lot of details yet, but I am looking forward to it. Nadine and I joke that we are the Jareds of Jamba Juice.  I do know that there will be smoothies and oatmeal in my future and that makes me happy.
Posted by Lisa at 8:27 PM

Wow (haha), congratulations! That's so cool! You look so cute in that picture! :)

This is too cool! Congrats!!!

How cool is that! Can I get an autograph the next time I run across you? Will I be able to get pst the rest of your entourage? Lol!

That's super cool, Lisa! I've never had Jamba's oatmeal but I guess I should give it a try :) You continue to impress and inspire me! It sounds like this will be a lot of fun and a great opportunity all around.

How exciting! I love me some Jamba Juice :)

I am so happy that you get to do this! I haven't been to a Jamba Juice is a long time... (In college there was a place called "Zuka Juice" that my hubby and I used to go to a lot, that turned into a Jamba) I didn't even know they had oatmeal, so now I want to seek one out. See, you're a good ambassador... you just convinced me to try that and I'm going to see if there is one near my group run on Sunday to convince the gals to go there instead of S-bux post run.

That is awesome! Congratulations - that page looks so cool!