Biggest Race Day of the Year....

According to Active.com, Independence Day is the biggest road racing day of the year. I am happy to say that I have now joined the running community by racing on July 4. And what a great race it was. I was one of several thousand to run in the Coronado Independence Day 15K.

I am happy to report that I raced my best race EVER. I felt good and I finished strong. I beat my previous 15K time from the Resolution Run by over five minutes!!!! I am thrilled. Once again, my Nike+ said that I ran further and faster, but I don't care. I am pretty sure that the course is accurate. Between needing to be calibrated and my own inefficient running route, the Nike+ was off by about 1/4 mile. I am pretty sure that it is common to measure longer than the race distance when you weave in and out of people and take turns on the outside.
Time: 1:24:05
Pace: 9:02/ mile
Rank: 549/1161
Division Place: 33/81
It was relatively cool and overcast. In fact, the marine layer was so low that you couldn't see the Coronado bridge that is right next to Tidelands Park. I thought that it would burn off. The sun really tried to break through, but during our race, we had a nice cloud cover. It was super humid, but at least the sun wasn't beating down on us like it did during the Iron Girl. 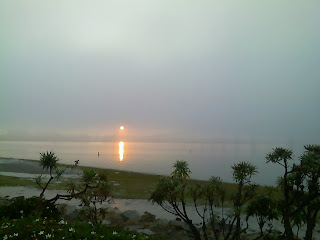 Here is a picture of the sun rising as I was wandering around before the race. You can barely see the Coronado bridge peeking through the fog.

This was the first time I had ever gone to and run a race all by myself. Laura is fighting a calf/achilles injury, Jen had scheduling issues and I never hooked up with other moms I know. I arrived at the site really early because I heard that parking could be super tough (around 5:30 for a 7 a.m. race). I am glad because I snagged a GREAT parking spot. I was able to wear a sweatshirt in the wee hours and then go stash it in my car closer to the race along with my race t-shirt and swag bag. I talked to random people during my wait. I even took some pictures of a few people who really got into the spirit of the day. 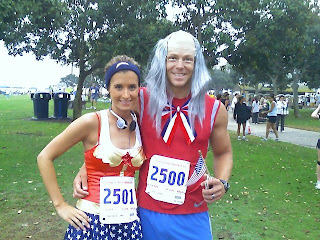 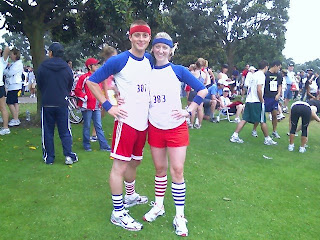 I took pictures of these couples getting into the holiday spirit. Neither had thought to take pictures, so I sent the pictures to their cell phones in their cars. They were thrilled. I love technology.

During the race, I was able to focus on my running and really get into a good groove. There were times when I didn't think I could keep up my pace and thought about slowing down to rest (I didn't stop at all!) But I just focused on breathing deeply through my nose and trying to get a second (and third and fourth) wind. Funny enough, when I felt myself slumping a little I pictured Kara Goucher. I pictured her stride, so strong and graceful, running in the Olympic Trials 10K. Or I would picture Shalane Flanagan with her look of determination and half smile.
This picture (left) of Kara Goucher isn't from the Trials, but shows how strong she looks 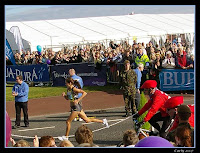 I had fun and it went a long way in building my confidence. I just need to keep it up through the middle of August so I can run the Half Marathon well.
Posted by Lisa at 8:05 AM

Sorry, the comment deletion is me b/c I didn't realize I was signed in as my husband :)

ANYWAY, congrats on the race! Here you were so nonchalant about the race and it was your best ever!

P.S. I might have to try out your visualization techniques . . . I'd imagine picturing Kara and/or Shalane would be a great motivator indeed--I like it! :)