Ah yes… you thought you were done with Hood to Coast recaps.  Well, almost.  I would be remiss if I didn’t finish the story.

Once I was done running, we hopped into the van and headed toward the beach. We all had thought we would shower, nap etc., but we were too excited. This was the “biggest beach party on the West Coast.” 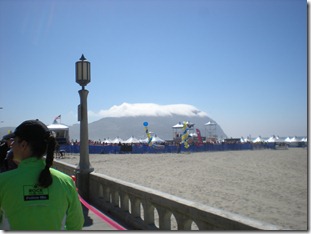 The beach was slightly cool and breezy. It was nice. 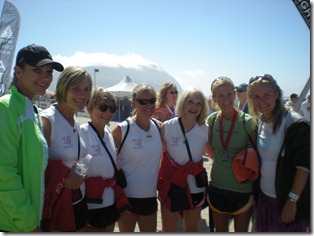 We stalked famous people.  The above picture is the Heart –n- Sole team from the Hood to Coast Movie.  Below is Bob Foote, the founder of Hood to Coast. I really enjoyed talking with him! He is a runner’s runner. 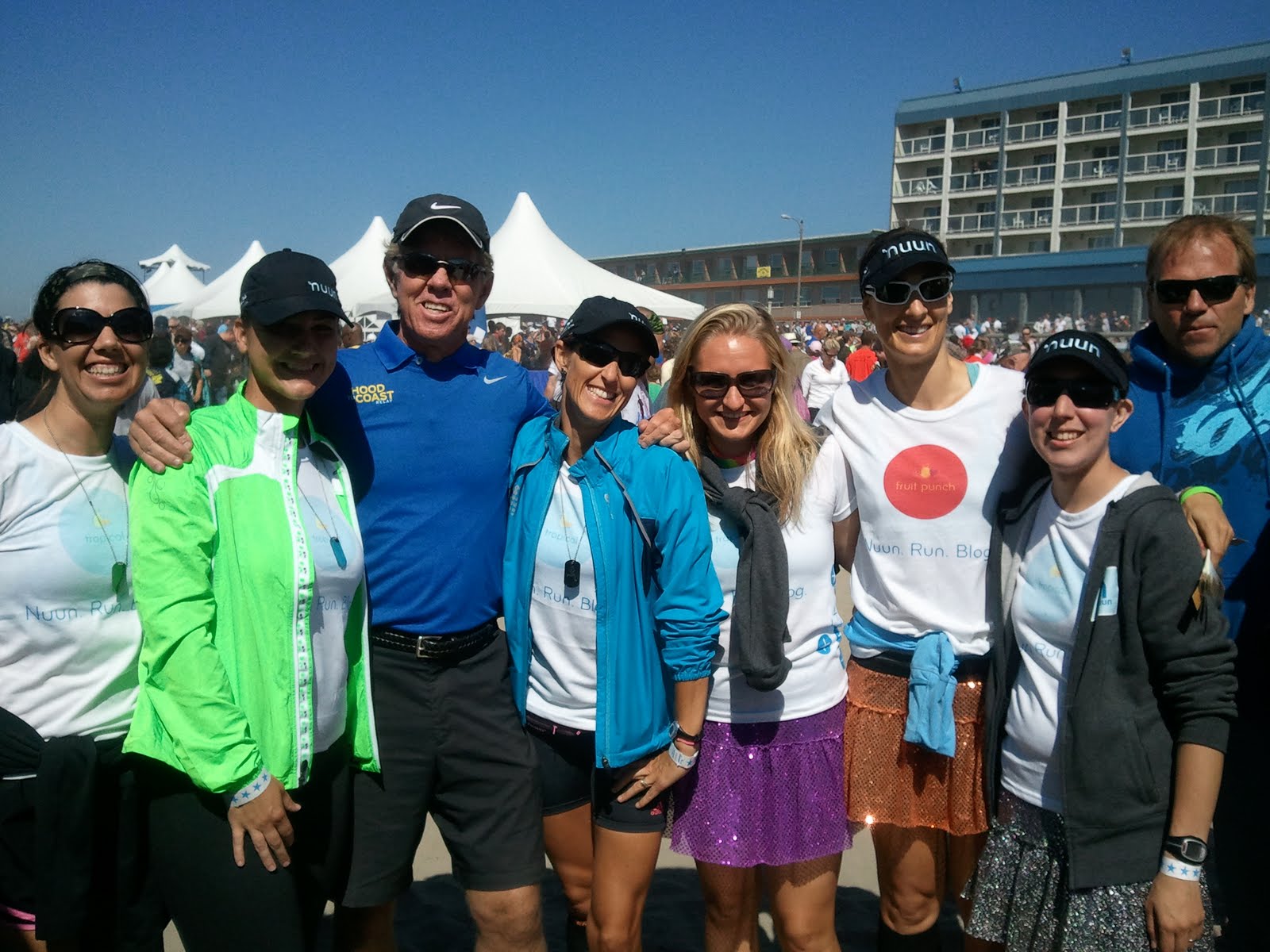 Then it was time for a little revelry!  I think we earned those beers! 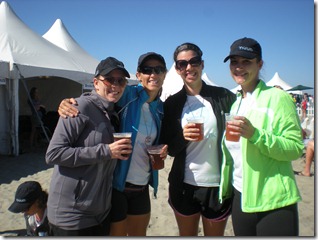 After a few beers, it was time to head to the finish line to cheer on our teams.  Unfortunately, the rest of Nuun Platuun hadn’t made it to the beach due to crazy traffic. It was up to us to give XLMIC a huge welcome. 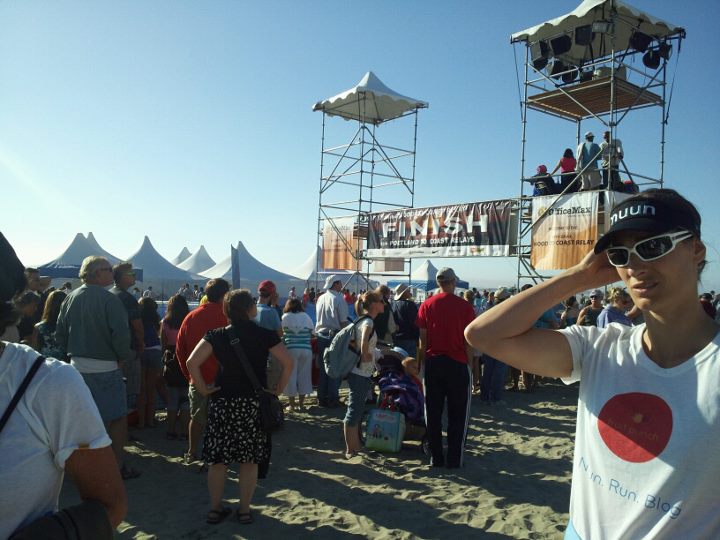 As usual, she was giving it all she had.  You can read her own version HERE. She ran that last leg as fast as she possibly could.  She anchored our team beautifully. 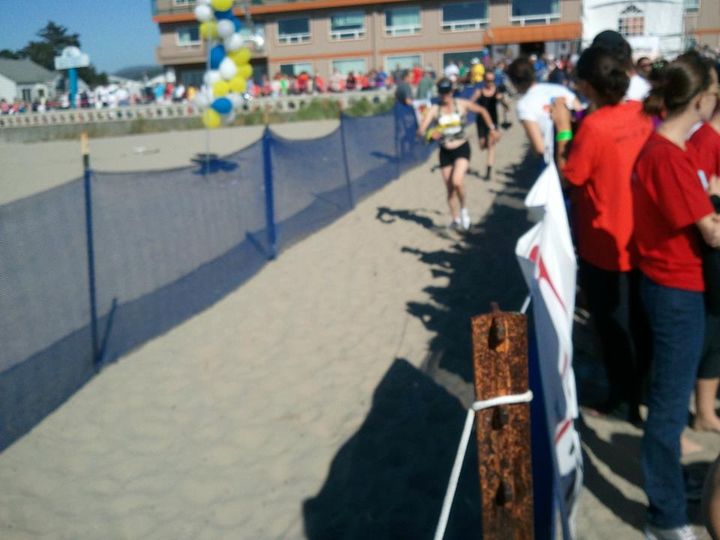 Nuun Platuun did better than anyone expected.  While we did great on the first two legs, each one of us dug deeper for that last leg.  Our team finished 200 grueling miles in 27:59:17!!!   We finished 7th in the Women’s Open Division!  That was an hour faster than our 10K PRs predicted.  We were all more than thrilled at our stellar finish. 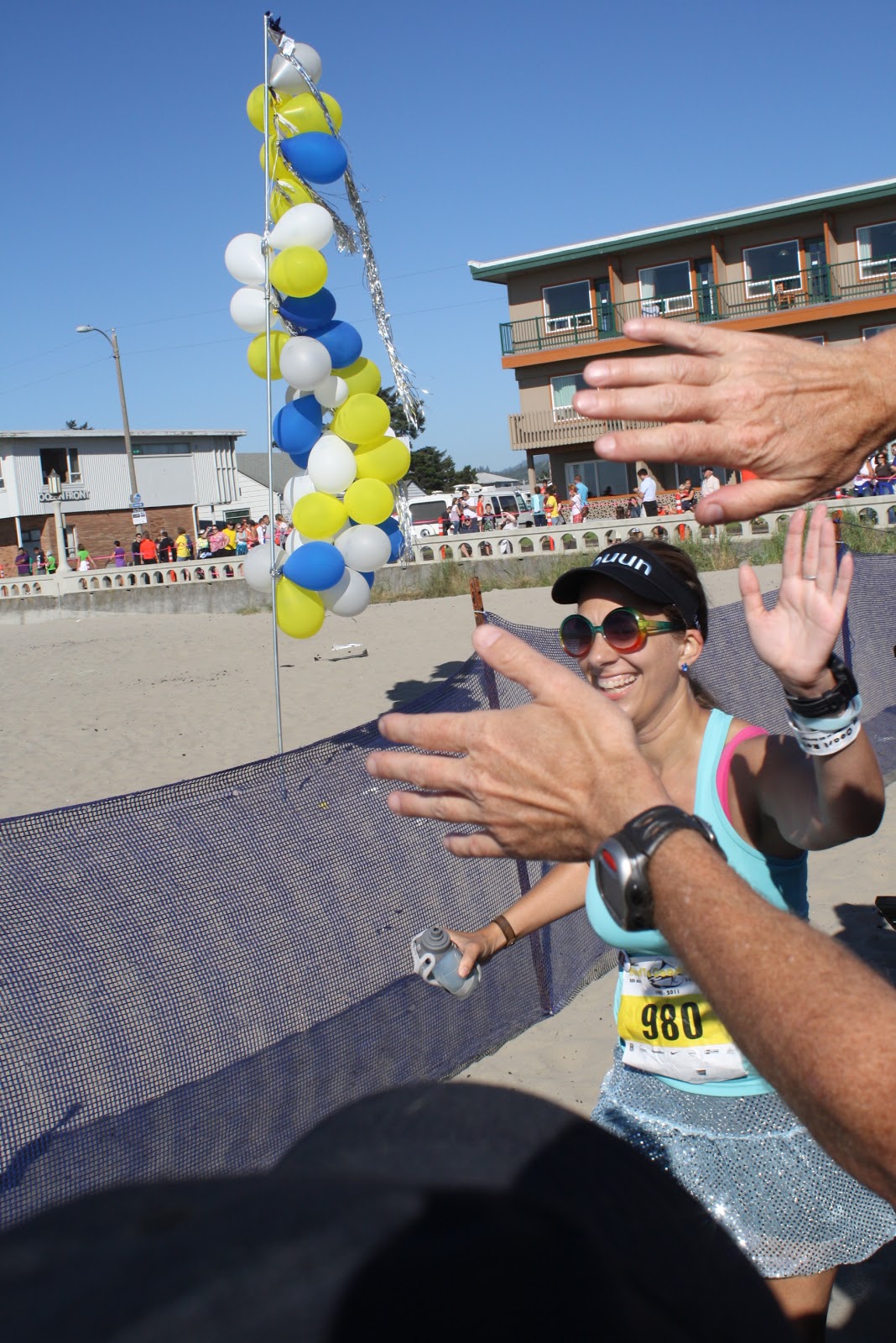 Thirteen minutes later, Megan finished.  She was injured and hurting, but she finished strong with a huge smile on her face (pictured above).  You can read about her runs HERE. 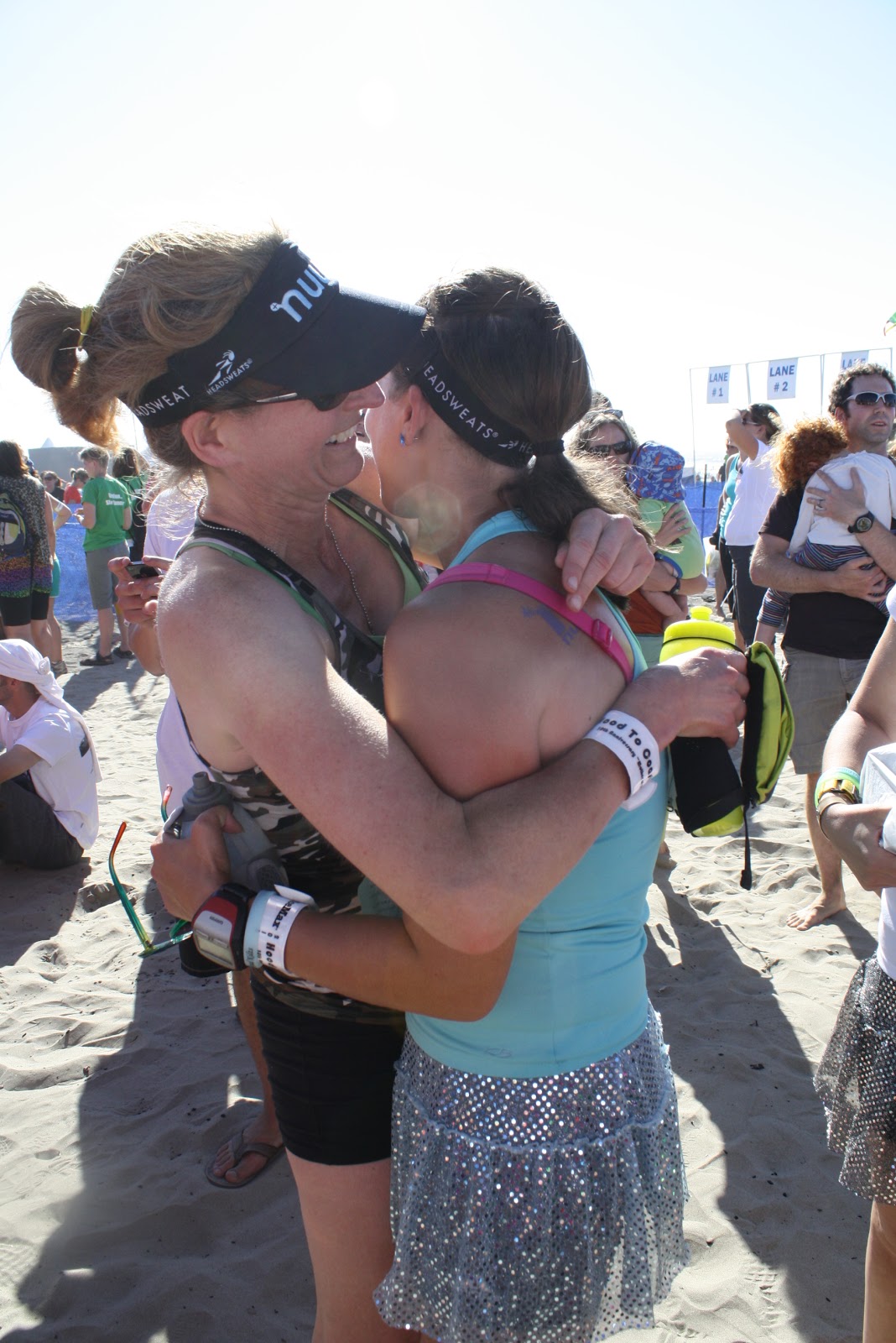 There were a lot of emotions.  Hood to Coast was over and both teams had highs and lows and did GREAT. 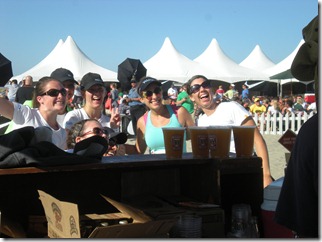 Van 2 finally made it to the beach.  We received our medals, took some pictures, then there was more partying. The entire

team had a fun time. It was everything I had hoped it would be. It was more than a race, more than a blogger meetup. It was something hard to put into words (yet I used thousands of words to try). I would do it again in a heartbeat! 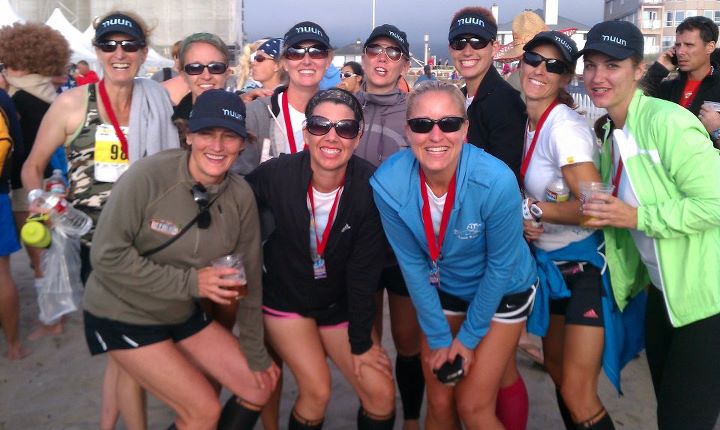 Here is a video that briefly portrays the Hood to Coast experience:


And now a word about our incredibly generous sponsors…


Of course, the number one sponsor to thank goes without saying (but I’ll say it anyway). Nuun was FANTASTIC in putting this entire thing together.  I still pinch myself when I think about how lucky I was to have been involved. 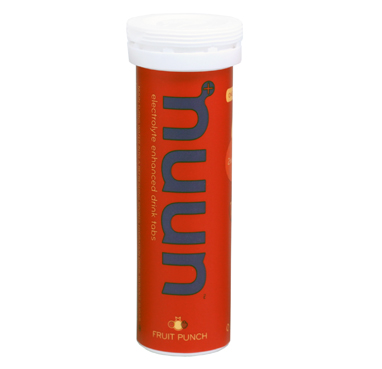 Running Skirts generously donated some awesome camo running skirts to the team. How great do we look? 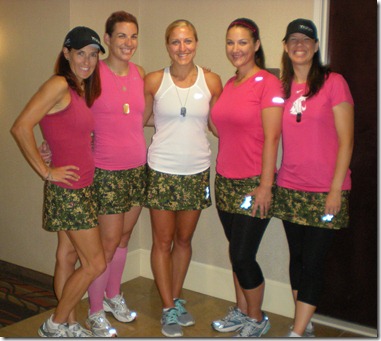 Road ID gave us some killer dog tags. I love mine and wore it the entire time during HTC. 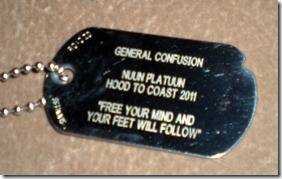 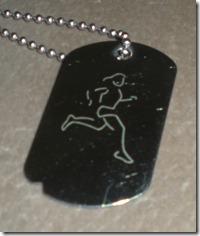 Moving Comfort was kind enough to give us some bras. I LOVE my Juno bra.

Looking back, I should have run in just my bra during HTC.  Jess did that and looked awesome. 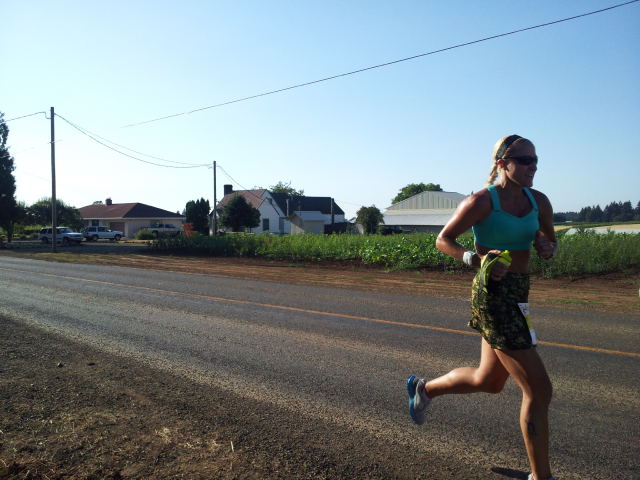 Tommie Copper sent us a bunch of compression gear. I have worn the ankle sleeves several times (to help with some tendonitis I get on the top of my foot), the knee sleeve (after my first leg when my IT band got a bit angry) and the calf sleeves.  They are all super comfortable!

Buildasign.com provided signs for our vans. They did a great job! Not only did the magnets look good, but they stayed on the vans.  Four vans, multiple signs and no sign loss. 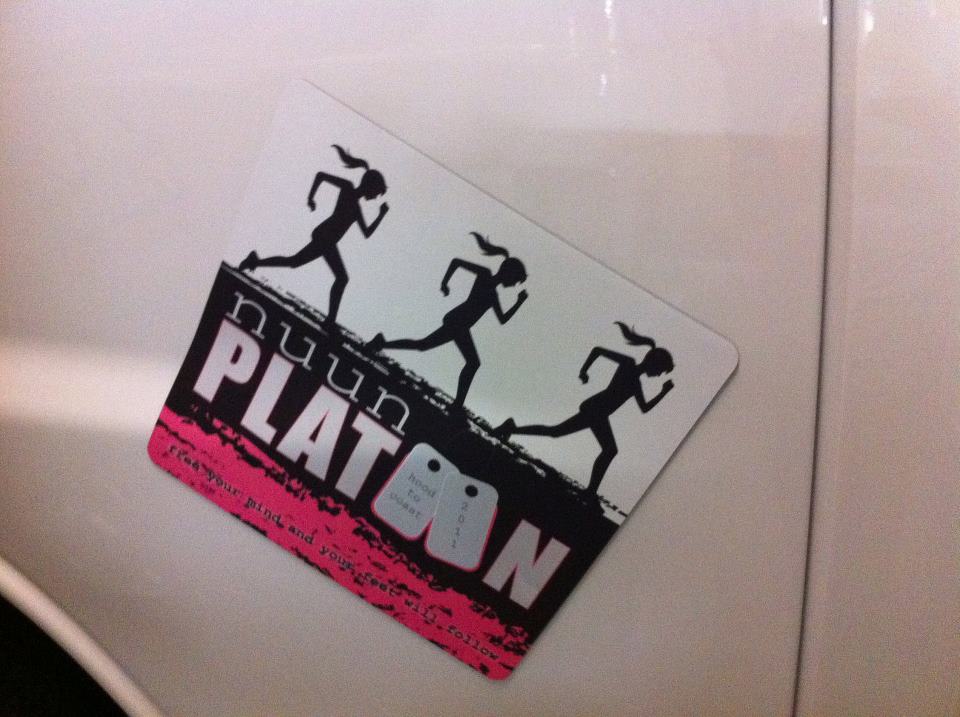 2Toms provided some great Sport Shield to keep us from chafing.  I am taking this stuff with me to St. George! It goes on like roll-on deodorant and dries so you don’t even know it is there.

Jack Black cosmetics supplied us with a great sample pack of lotions, sunscreens and lip balms. This is another product I will be taking with me to St. George. They have an SPF 45 sunscreen that I really like and the lip balm saved me!

We spent a day and a half in a van and snack foods were important. Jamba Juice provided the team with some coconut water juice.  They were a hit! 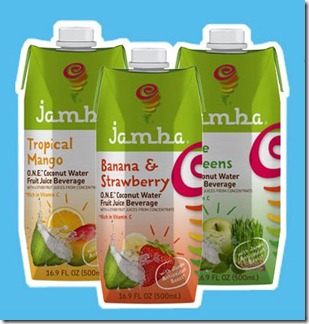 Jenny Craig also sent us some Oatmeal Breakfast Squares. They really hit the spot at odd times during the day.  They were perfect as a breakfast snack even when breakfast was at 2 in the morning.

And we also were given some Gu, a key ingredient of any race. While the flavors weren’t my personal favorite, Gu is my gel of choice. It will be fueling me on Saturday during the marathon.

It was wonderful for all these companies to support our adventure in such a big way. It just shows how admired all the women are and how they conduct themselves out in the blogosphere. Everyone represented these sponsors well and appreciated all the products more than the sponsors will know. It was just the added touch that made the entire experience a bit surreal.

Thanks again to everyone for all your support.

Don’t forget to enter my giveaways for free Gymboss Interval Timers.  Today is the last day.  You can find the blog giveaway HERE. And my Facebook giveaway HERE.
Posted by Lisa at 10:57 AM

I wish I would have met you all at the beach! Thanks for all the recaps - fun to read about the race from someone else's perspective. GOOD LUCK this weekend!