Hood to Coast Race Report Part 1—before the race

What a whirlwind week it was leading up to Hood to Coast. Thursday, before flying to Seattle to meet up with Nuun and my Nuun Platuun teammates, I had a little thing called first day of school. My 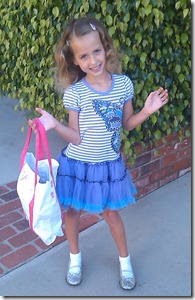 youngest was starting kindergarten, a huge milestone.  Instead of arriving 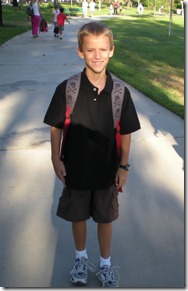 in Seattle early Thursday to hang out with the team and decorate the vans, I gave hugs and kisses and took pictures of two excited kiddos. As much as I am trying to enjoy my running opportunities while trying to build a business based on fitness, first and foremost I am a MOM. I am so glad I was able to do both.

After that, I headed to the airport to start my adventure. I was giddy with excitement. I went crazy with the camo 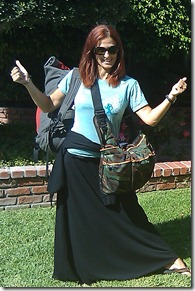 theme and even had a camouflage carry-on bag. I was ready to go.
At the airport, I was in the security line with a soldier. I even snapped a picture with him. I told him all about the race and thanked 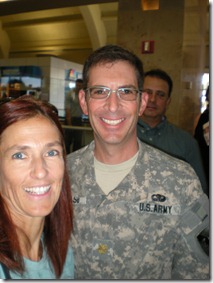 him for his service.  Another passenger had run HTC a few years earlier and told me how much he enjoyed it.  My excitement was building.

I arrived in Seattle and got a cab and headed to the Nuun offices. When I arrived, I expected the party to be in full swing, but I was the first to get there.  Yeah!  I didn’t miss out on as much fun as I had thought!  The Nuun staffers were super welcoming and made me feel very comfortable.  So much so, that a couple of the bloggers thought I worked there when they first saw me.

When everyone walked in, it was surreal.  I have followed many of these awesome women’s blogs for a couple years.  To be honest, I felt a little bit star-struck. Many of these women had blogs with 10-20 times more followers than me, others were Boston alumni and accomplished ironwomen.  I was feeling a little self conscious.

But soon I was chatting away with everyone and felt more comfortable. We all went back to the hotel as Van 1 had an early departure and were meeting in the lobby at 5:45 a.m.  We snapped a couple of pictures with Nuun Platunners that we wouldn’t see until the next day. How cute are we in our camo skirts from Running Skirts.com? 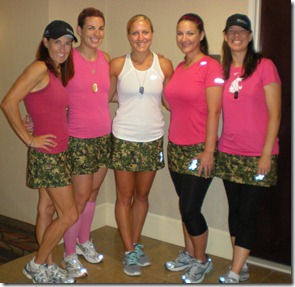 Pictured here are me, TMB, Jess, Tricia and Kerrie

My hotel roommates were Kerrie and Emily.  Emily was still on East Coast time and hit the sack right away.  Kerrie and I tried, but ended up chatting for at least an hour—whispering in our bed.  It was great.  Honestly, I wish there had been a bit more of that kind of “girl talk” during the race, but believe it or not, it seemed like we were always focused on some task or another and didn’t do as much of that as I would have thought.  Once we stopped chatting, neither of us got much sleep.  5 a.m. came way too quickly, but the day had come and we were heading to Mt. Hood!! 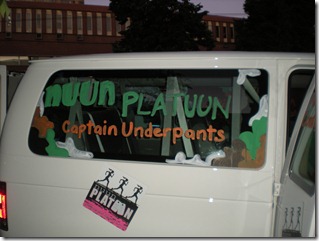 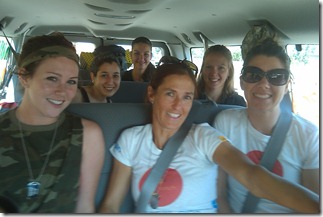 On our way down to Oregon, we were interviewed for an article in a magazine!  Wow…we were famous!  We passed the phone around and answered the reporter’s questions. 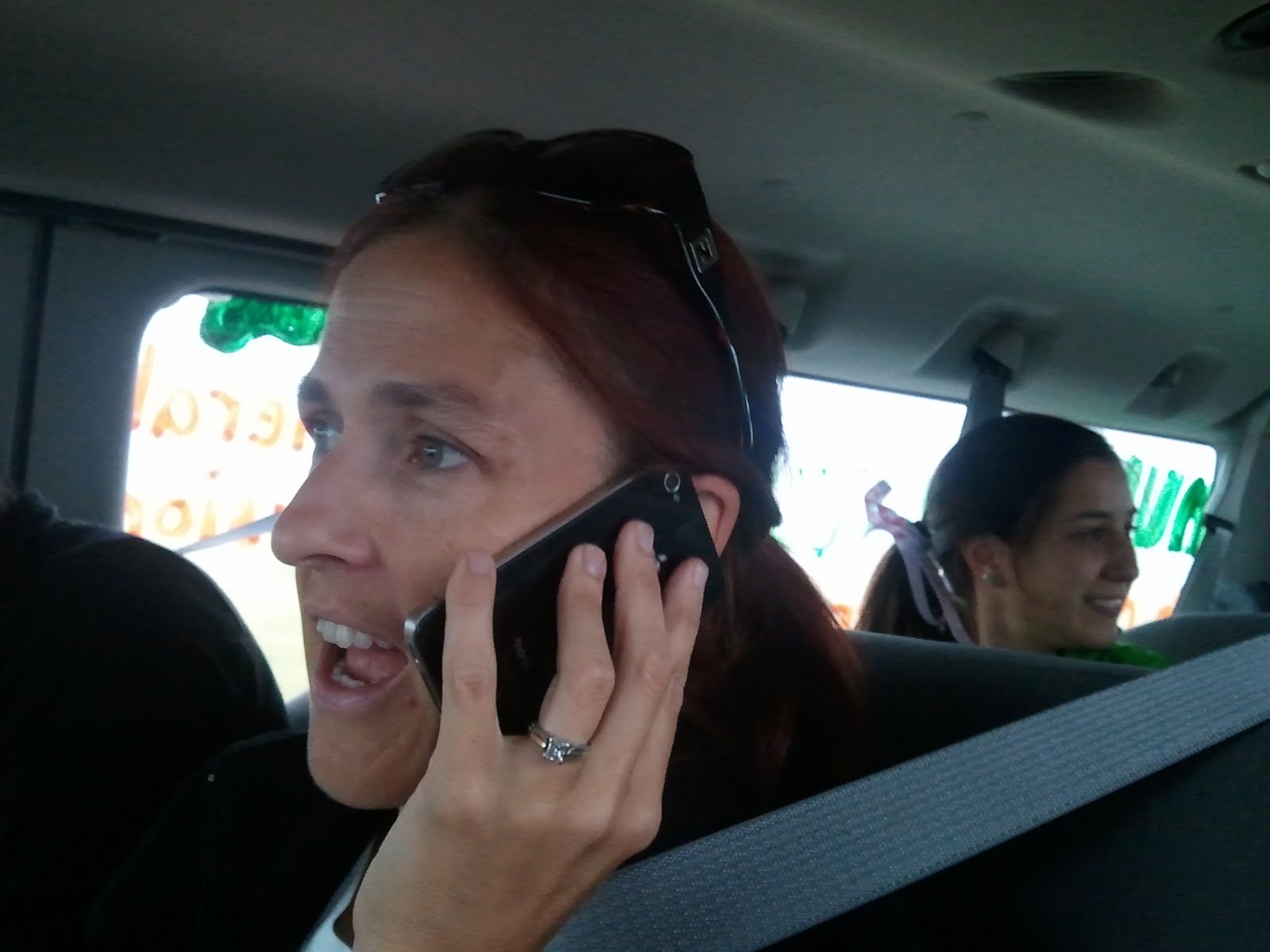 You can read the article HERE.

As we headed east from I-205, I started getting really excited. I was in my old stomping grounds of East Portland/Troutdale! We drove mere miles from my childhood home and into Gresham where I spent a lot of time in my teenage years. 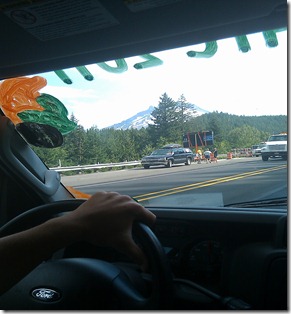 When we saw Mt. Hood getting closer, the excitement in the van was palpable.  We were SO close to the start.  We had all been looking forward to this for so long. The noise level started increasing in the van.  Except for Tricia…she was getting noticeably quiet. I wasn’t sure if it was her “game face” or if she was getting more and more nervous. I know now from her report on leg 1 that she was terrified. When we saw our first runner, a cheer went up.  That was going to be us soon.  Specifically…the first runner we saw was running Leg 6- my leg.  I was officially excited.

We all got our game faces on... 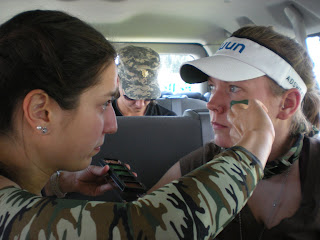 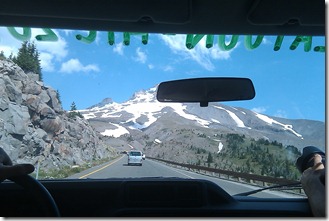 And then we were there!! The teams, the vans…it was all real. 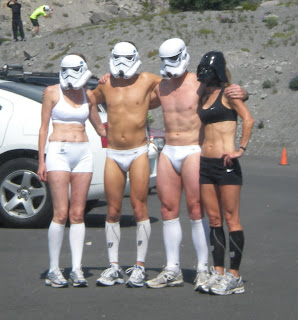 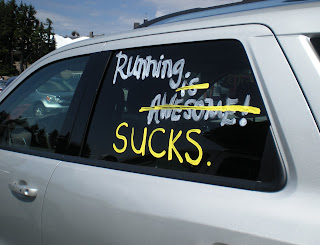 We found the Nuun tent and donned our Nuun tattoos and spread the Nuun love! 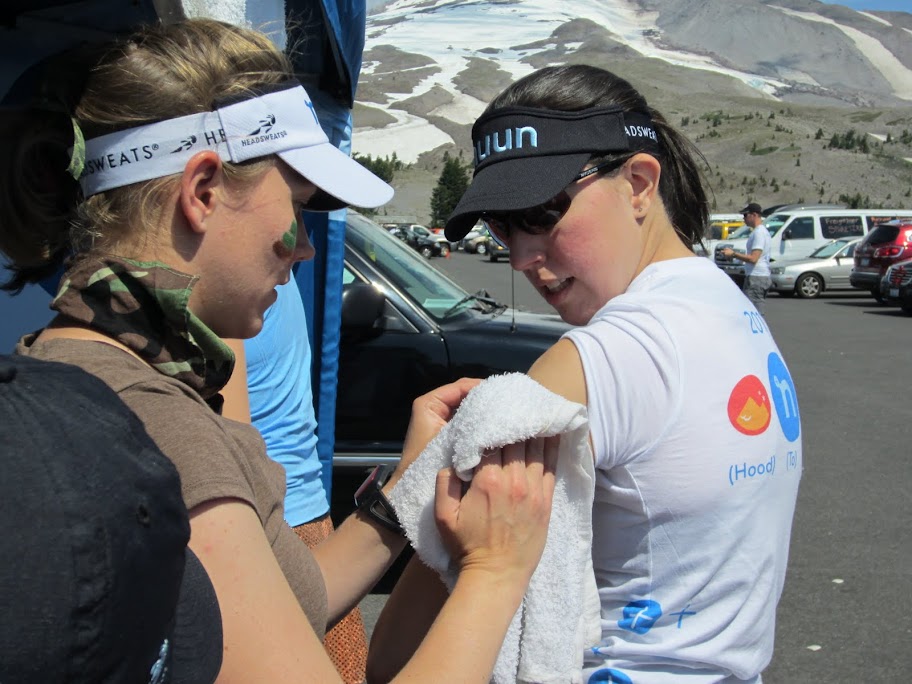 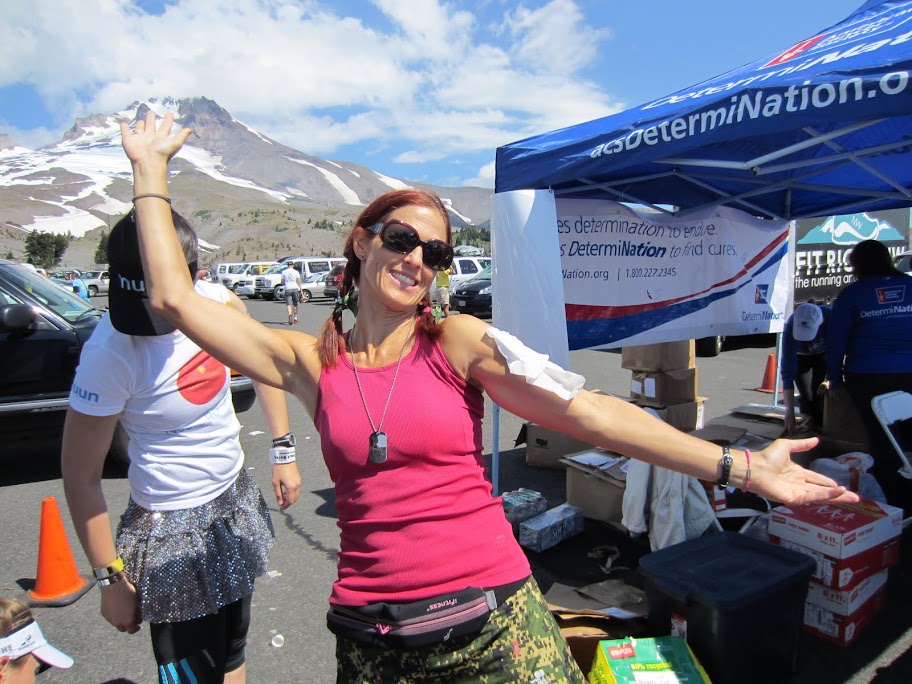 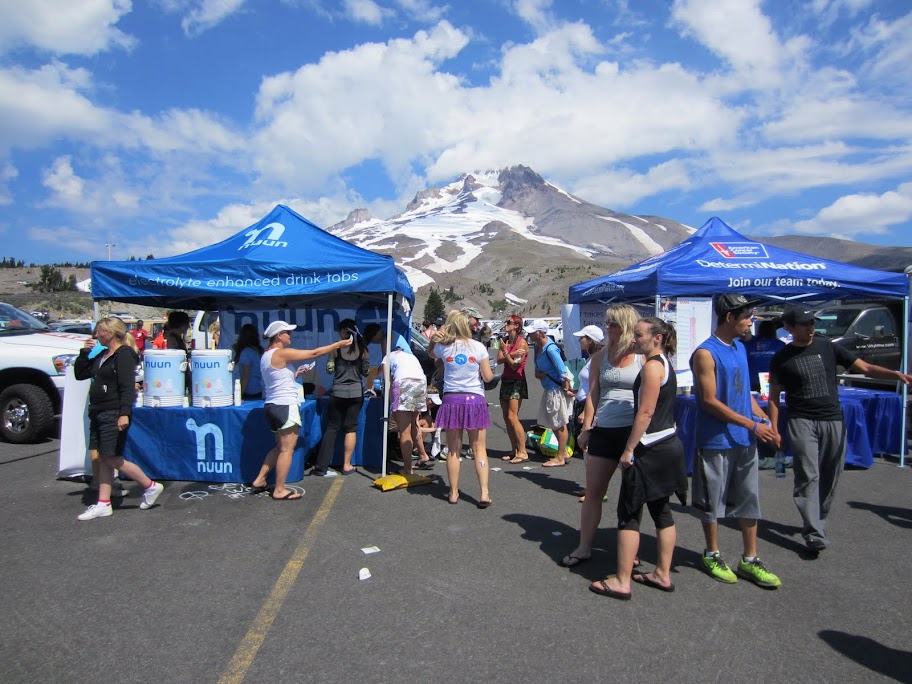 A familiar face from the Hood to Coast movie stopped by and said, “Nuun Platuum??”  It was Bob from Dead Jocks in a Box*!  He reached out to a few of us via Facebook to find out our start time, as well as tweeted with Tricia.  He was super nice. We didn't see them again.  They were faster than us and finished first in their division! 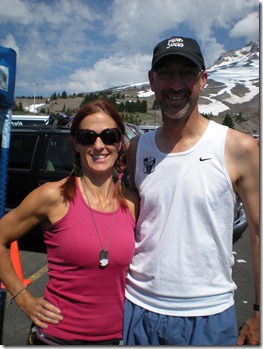 Tricia was ready to go to lead off our van. This thing was really happening!! 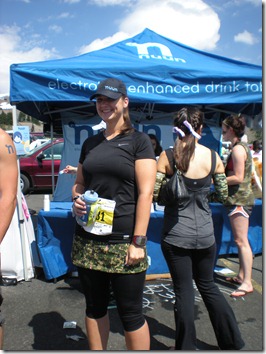 She joined Alanna from the AfterNuun Delight team and headed toward the start line. 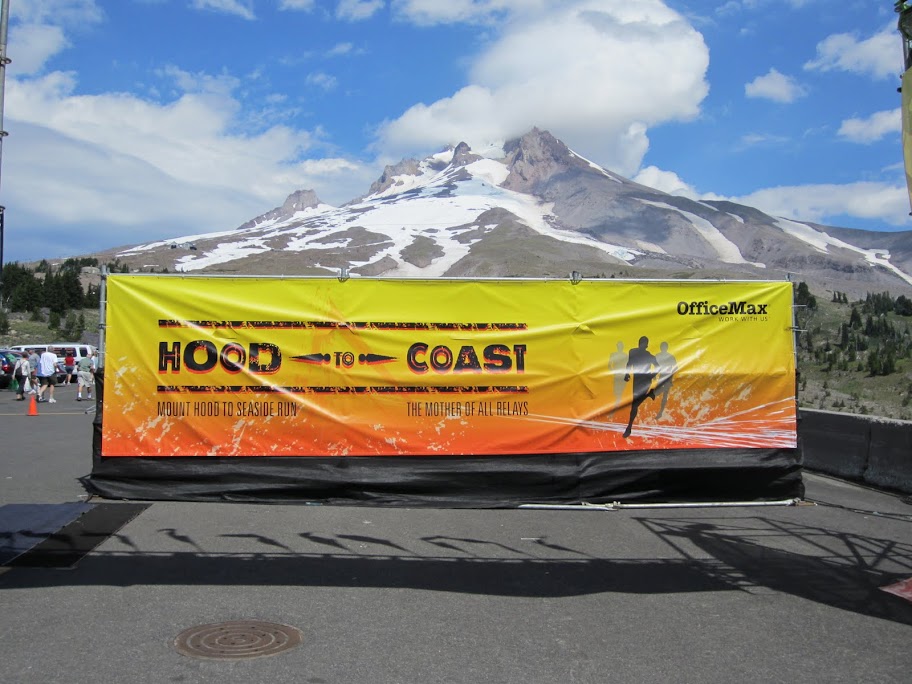 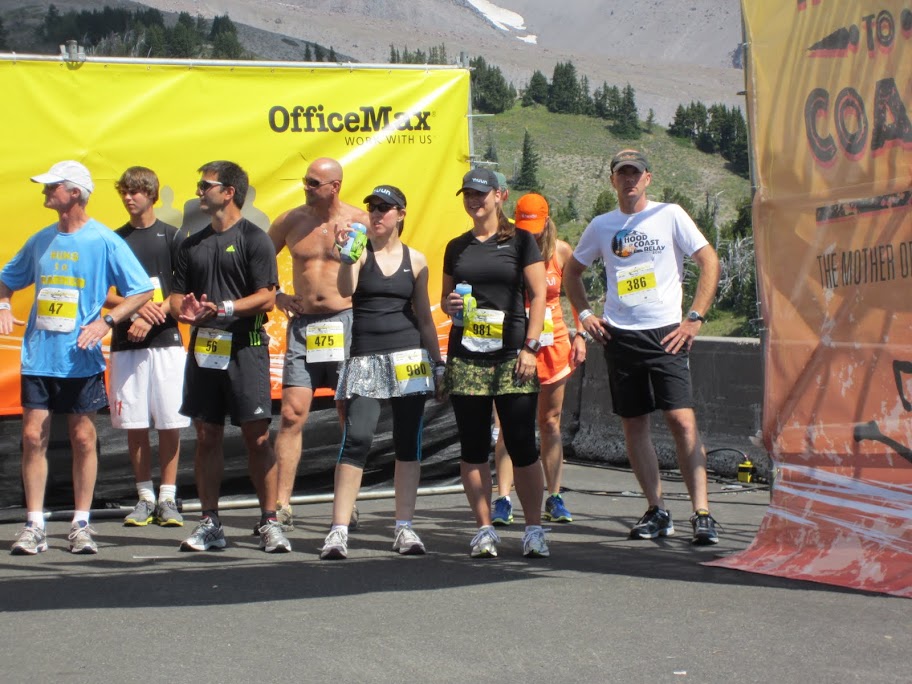 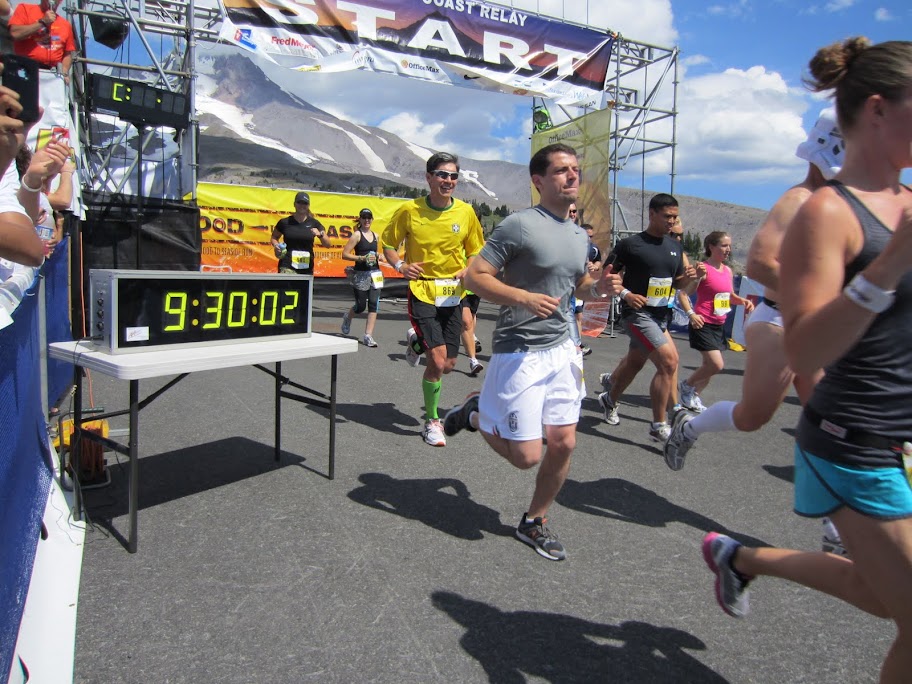 Stay tuned for Part 2- the highs and lows of the first legs.

*It was the first time a “celebrity” had messaged me on Facebook.  I was pretty excited. Bob was one of my favorites in the movie because he looks a lot like my brother-in-law.

I love your recap. I had not even heard about the article so cool. It is also great ot know that you can do it all. You have great priorities and are still getting to do everything. I can't wait for the next installment.

I wish there had been more 'visiting' time, too! But man…what a blast! You are so cute w/ your soldier :D

No clue why I felt SO much pressure on that first leg.

I was sooo happy to finally meet you!

Weeeeeeeee! Such a great recap -- I love seeing what everyone is writing! :)

That was a memorable day, from the first day of school to meeting all the bloggers.

I know I would be star struck if I saw the likes of Kerrie and Tricia and the rest of the bloggers. I was star struck when I met you :) Actually, it kind of threw me off because I had great admiration for you and when we were standing in front of each other I was stumbling around for something to say. That was certainly a memorable day for me :)

It sounds like you fit right in with everyone else and that you guys became a team rather quickly. Can't wait to read the next installment!

glad you were able to send the kiddos off on their first day of school! i know that means a lot to them - i look back on my parents sending me off fondly :)

That's great that you were able to see your kids off because you headed out.

Looking forward to reading the rest of your race report!

Congratulation to your younger daughter and your family comes first. I think that it is great that you are an active mom.