After an hour of the best sleep I have ever had, I was in a GREAT mood. Some of the negativity that haunted me the previous day was completely gone. I knew it was going to be a fantastic day. My expectations would be exceeded.

We started the Hood to Coast adventure with the express goal of having fun. I loved that we had no time goal and that we were all just running our best without any expectation.  But, we are all competitors at heart and find motivation by pushing ourselves against ourselves and others.

On the first day, there was never talk of how we were doing or where other teams were. On Saturday, things changed a little. The friendly banter and trash talking began. I’m not sure where it came from, but I love it.  We had trash talked about various college rivalries* but that morning, things changed a bit. If you read Tricia’s recap HERE, you will see that her competitive juices started flowing during her last leg that morning. She pushed herself and ran that leg fast! 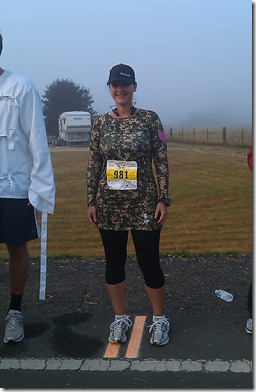 Lauren, who had been using me as motivation (aka…’catch and pass Lisa’) smiled at me and said (in a fun, sweet tone) “I’m coming for you.”  I quickly replied, “bring it…you probably will catch me, but you will have to work hard to do it.” Somehow, we all turned it on that morning and ran awesome legs.

The other team, AfterNuun Delight, was predicted to finish quite a bit ahead of us. We were ok with that, since it never really was a competition. But by those last legs, we realized that our little underdog team was neck and neck with the speedy Sparkle Skirt gals. Our goal became clear…hit the beach the same time as the other Nuun team. We needed to make sure that we ran our fastest in order to finish strong.

I was so excited about this leg, but I knew from the previous two legs that I had a long time to wait. I bought a breakfast sandwich from a local entrepreneur. After Friday’s under-fueling, I wanted to make sure I ate some real food. It was the best breakfast sandwich I have ever had.

After Tricia was done, she passed off to Alyssa. Alyssa kicked some booty as well. 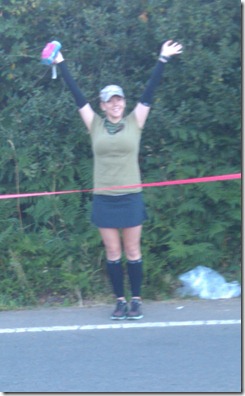 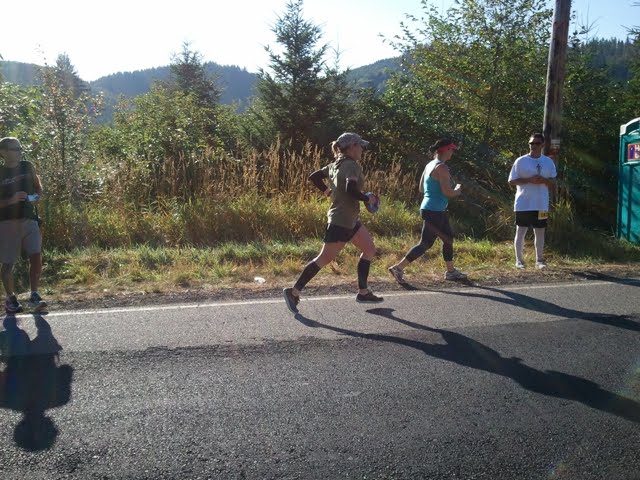 Alyssa did an awesome job of keeping the sparkly AfterNuun Delight team in our sights. She and Dorothy ran the same leg. Dorothy had some incredible runs that weekend. Alyssa was able to run run fast enough to hold Dorothy off for most of her run, so when Caitlin took over, they were only a couple minutes ahead.  Caitlin ran super strong, passed her sparkle counterpart and never looked back.*

Kerrie was next and was all smiles. Her last leg is described HERE. She ran her leg strong and fast.  We were on a roll. 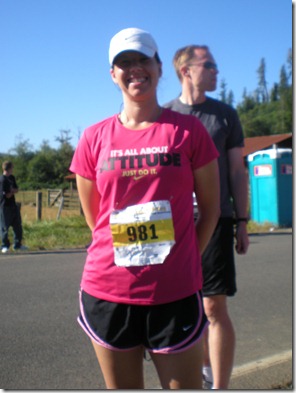 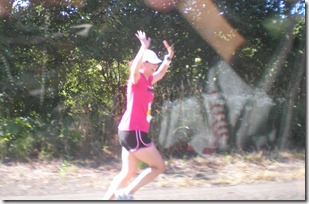 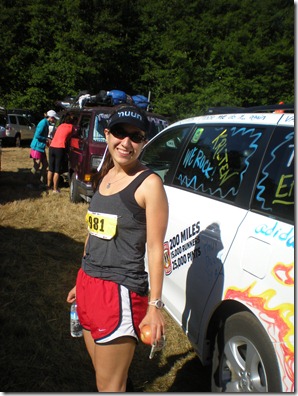 And then it was Margot’s turn again. Her leg was one of the most difficult of the entire relay. She basically had to run up and down a mountain. She kept telling us how slow she would be and if we saw her walking to forgive her. Yeah…that never happened. 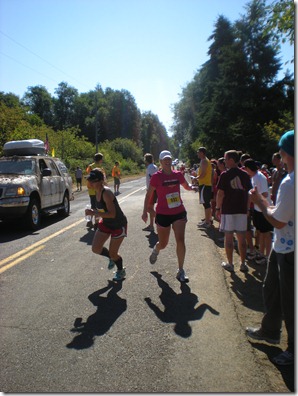 Margot made that hill look easy. It was KILLER. I was tired just driving up it. She just kept running and then became a blur on the way down.  HERE are her words.

Then it was time for me to finally run! It was a beautiful day and I was excited to run. At this point I wanted to run as fast as I could. My goal was to make Lauren run really fast if she was going to pass me this time. 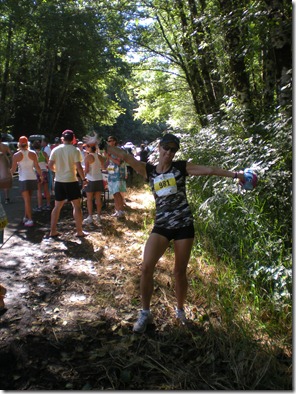 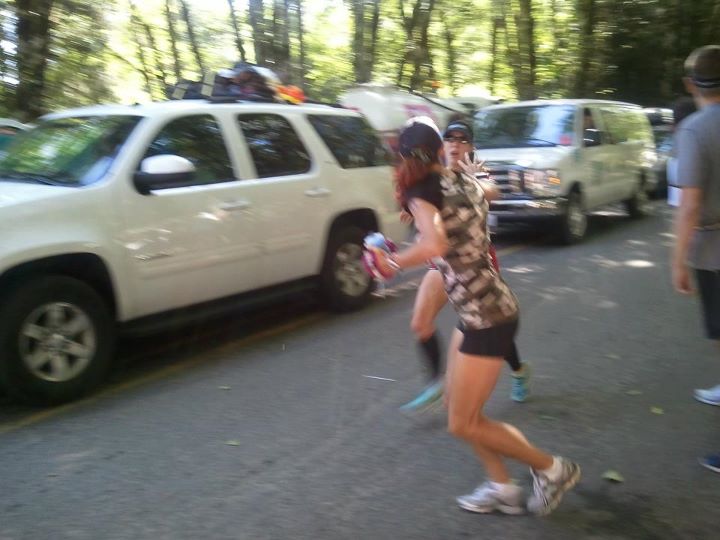 Traffic had been getting increasingly difficult. As I started my leg, the rest of my team immediately hopped in the van and headed toward the next exchange.  They passed me and cheered for me, always a boost, especially up the first hill. 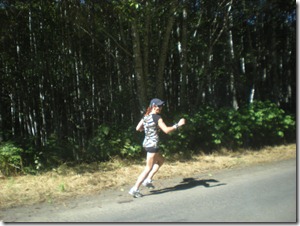 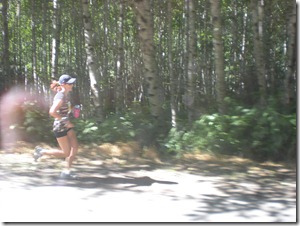 But then, I passed them. 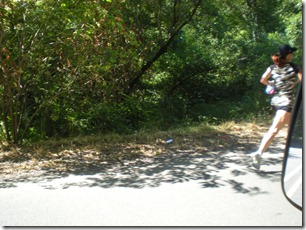 I started seeing runners carrying clipboards to give to the other vans for their team (since it was clear that the runners would beat the vans by a lot). There was absolutely no cell phone coverage, so none of us knew if the other van would even be there.  But I wasn’t concerned with any of that. I was just running.

As I was approaching the top of my biggest ascent, I saw someone running towards me.  It was Margot! She had come to run with me. Wow, after a killer leg, she was going to run a ways with me—how sweet! Honestly, I was a little nervous.  Margot is faster than I am. She told me to run at my pace, but I felt my ego sneak in and I wanted to make sure I wasn’t too slow for the Faster Bunny.  We crested that hill and then went sailing down the other side. I glanced at my Garmin briefly (I did not want to trip) and saw we were in the low 7’s.  After a mile or two, Margot headed back to the van (the van was actually quite a ways behind us).  She was just the push I needed to run out of my comfort zone and speedy!

It was a glorious run. It was along a windy highway in the woods. The trees would open up to beautiful vistas of the foothills of the coastal range. It was sunny, but there was plenty of shade. It was the perfect leg to end on, capping off my Hood to Coast experience with an amazing run. I was actually a little sad when I approached the end.

As I came into the transition, I didn’t see Jess waiting for me.  Uh oh…maybe they didn’t expect us so soon. Our van had run out of our minds and all of us ran faster than we ever thought we could.  I ran 5.42 miles at a 7:47 pace***!! That is quite a bit faster than my 10K pace on one hour of sleep!!

Suddenly, I saw Jess pop out of the crowd, looking a little surprised, but very happy.  Apparently, she heard our team number and jumped into the transition area. For the previous two legs, she had seen Lauren handing off to Jen, which was her cue to get ready.  This time, the Nuun Platuun arrived first. Our little engine-that-could was 30 minutes ahead of our projection!!

I was done, hoping to chat with some of the Van 2 gals, but they had already taken off, worried about the traffic and getting to the next exchange before Jess. I wandered around a bit.  After so much time with so many teammates, it was strange to be by myself.  Suddenly, there was Alex.  But how? I passed the van miles back.

Apparently, Alex was worried that Van 2 wouldn’t know we were coming and wanted to touch base with them. He had Kerrie drive and he ran about two miles down to the exchange, only to miss the other van. I think he just wanted to run.  Sitting for that long driving a van has to get old. He probably wanted a break from the van chatter as well.

When the van arrived, I hopped in and we headed toward the beach.  WE WERE DONE!!!  We had each run three times within a 24 hour period. We were amped and ready to celebrate in Seaside.

Stay tuned for the final installment (maybe) of this series of race reports.

The winner of the iFitness Hydration Belt has been announced HERE.

*But since my alma mater was well represented among, well…everyone in Oregon, and the Ducks dominate in the Pac 12 North, college trash talking got old for those from Washington schools.

**I’m so bummed that I didn’t get another picture of Caitlin before her last leg. Caitlin was such a huge part of our team and I don’t want to slight her in any way.

***I was predicted, based on my 10K PR, to run that leg at an 8:15 pace. I am happy to have blown that away. I am actually looking forward to my next opportunity to run a 10K to see if I can better that PR.

and love it, I hadnt seen that pre-run pic of me. thank you for it :)

I'm glad we got to run together! It was the least I could do after causing so much trouble on the earlier legs :). What's funny is that I was totally getting tired at our pace...I was planning on maybe running the whole way with you and when we were sub 8 it was like 'uhhh...I am WAY too tired to go this speedy' :).

I LOVE that hand off pic of you and Margot!

I love reading your H2C updates, because I ran the same leg as you did. I LOVED the downhill on this leg and it was so beautiful! So glad you saved your best run for your last leg! Good job!