Hood to Coast Race Report Part 4—there are zombies in Mist, Oregon

After I finished my night leg, our team was done for several hours.  It was 3ish in the morning and everyone was pretty tired.

Since I had just run a hard leg, I was still pretty amped. So when the AfterNuun Delight’s Van 1 lost their keys, I was happy to help them look.  It gave me a chance to walk around a bit.  Luckily, Kerrie and a random stranger were able to find the keys. Kerrie’s version of the night legs can be found HERE. Can you imagine how much THAT would have sucked? 3 a.m. and no keys to the van? I would imagine that finding a locksmith or contacting the rental company at 3 a.m. from St. Helens, Oregon would not be an easy task.

While there were places to sleep there in St. Helens, Alex decided that we needed to get to the next exchange before trying to sleep. He felt that waking up and driving to the exchange would be more stressful in the morning. BEST. DECISION. EVER. As we were getting into the van, we realized that Margot was missing.  Forget a set of keys…losing a teammate?  Now THAT would suck. It so happened that Alex is an expert in search and rescue.  Margot was soon found trying to catch some zzzz’s on one of the sleeping fields. Poor Margot was really out of it and very tired. Thank goodness she was safe! Her story in her words are HERE.

We then headed to the last major van exchange.  I think it was supposed to take 20-30 minutes. We drove along a dark two-lane highway and we all very ready to be somewhere to stretch out and sleep. A few of the gals stretched out on the back seats and fell asleep for a bit. Kerrie and I tried to share the front bench, but neither of us could get comfortable. Plus, poor Alex and Caitlin were trying to navigate. So Kerrie and I basically stayed up.

Our navigators were awesome. The directions given by the race were wrong, telling us to take a left instead of a right on a highway. By looking at the map and knowing that we needed to head toward Mist, Alex and Caitlin ignored the written directions and turned right. It helped that 90% of the vans were doing to same thing.

And that is when time slowed down. We entered the twilight zone of Hood to Coast. Traffic was moving at a couple of miles an hour. It was bumper to bumper. Traffic was the biggest subject of post-race discussions.  Traffic was horrendous. There were more teams this year than ever before and apparently those extra vans made a big difference. We crawled along the two-lane highway toward Mist. Ironically, as we neared the little town of Mist, the fog rolled in, giving everything a very surreal feel. The vans weren’t moving, there were random runners walking around as well as running along the route. 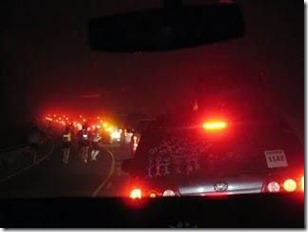 One guy crossed into our stream of headlights and his sunken cheeks and glazed look could only mean he was a zombie! Then we realized that he was just another runner who has had no sleep and was just trying to find a place to sleep. At that point I felt like a zombie. 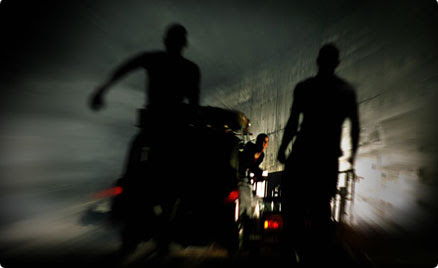 About then, Margot suddenly exclaimed that she had to go. “Can you wait?” we ask. “We should be there any minute.” But we had no idea how long it would be. We could be only a mile away, but it might take an hour. There is a rule that runners cannot relieve themselves along the course, it is grounds for disqualification. We started making suggestions—pee in a zip lock bag?  Umm…no. She finally just said, “I can’t wait, I’m going. I’m not wearing a race number, so they won’t know who I am.” And suddenly, she opened the door to the van and was gone.

We watched her run into the fog. To the left of her was a dark farmhouse, in my mind abandoned and a haven for zombies. Ahead of her were trees and mist that seemed to envelope her. I wish I could have caught a picture of it.  It was truly out of a horror film. It was almost artistic, even gothic. I worried that it might be the last we saw of Margot, but she soon jogged back to the van and hopped in. 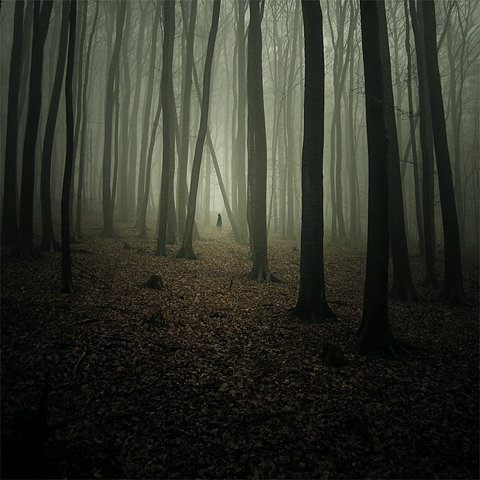 We FNALLY made it to the final exchange (AKA: Post-apocalyptic zombie encampment). At this point I didn’t care where I slept, I just needed to sleep. It was 5:45 a.m. and we had been driving for 2.5 hours.* Alex spread a tarp out on the ground and he, Kerrie, Margot and I threw our sleeping bags on it and grabbed some quick shut-eye. The others slept in the van. There was no cell phone coverage here and we had no idea what time XLMIC would be coming in, so Tricia had to be ready to go around 7-in a little over an hour.

You would think that an hour of sleep would not be enough. I honestly think that hour of sleep was one of the most solid hours of sleep ever. I think I felt better after that hour than I would have had I had four hours. It was a cool, crisp morning and I was excited for the day and our third legs. I was actually a little sad to have it almost over.We all woke up ready to start the day. And it would turn out to be a very good day. 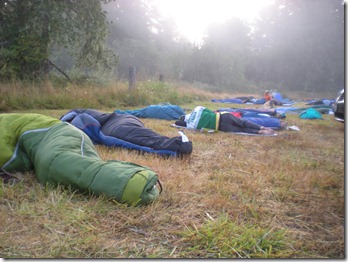 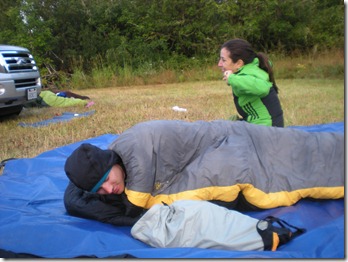 Stay tuned for the next installment of this saga**—running faster than cars.

*For the record, you can almost drive from Mt. Hood to Seaside in 2.5 hours via a non-traffic four-lane highway.
** I know that most of you are sick of hearing about this race that occurred weeks ago.I also know there are at least a couple people who still enjoy following on our adventure (I know I still enjoying reading my teammates’ recaps). I thought I would be done by now, but there is just so much I want to document for my own memory. It just seems kinder to the reader to break it up into multiple parts.  Thanks for sticking with me.

Not only do I really LOVE reading everyone's different take on the race, but also then I don't look like such a tool for my 10-part miniseries on the thing :P

love hearing these little extra tidbits. thanks for sharing. double tear by the way on not winning the belt but thanks for the giveaway