Last month I ran the first race of this series and had a great time.  Today Heidi and I came back to do it again* 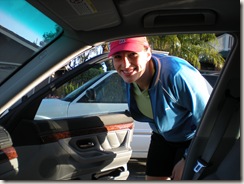 I thought it was going to be much warmer.  It was warmer at the start, but never quite warmed up like it did last time.  I wore a tank top with arm warmers and was pretty happy about it (although I was pretty chilly before and after the race).  The weather turned out to be perfect running weather: mostly overcast in the 50’s. 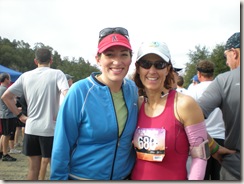 It was a little smaller than last month’s race.  I’m not sure if people are running Catalina Marathon or tapering for LA (although this would be a great taper tempo run).  It was such a nice, friendly atmosphere. 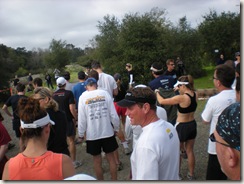 We started after listening to a recording of Carrie Underwood singing the Star Spangled Banner.    There was very little fanfare and we were off.
As we headed into the single track and up the hill/stairs, the runners were moving a bit faster than last month.  It didn’t feel like quite the bottleneck that it did last time.  I felt like I was moving at a nice clip, alternating between power hiking and jogging up the hills.  The trail widened into more of a fire road and runners were nicely spread out. 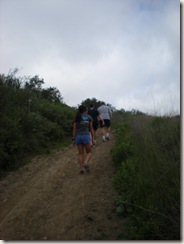 The hills were still a little steep, but weren’t quite as steep as I remember.  I think the fact that I have run two other trail runs since the first one has changed my perspective on hills. 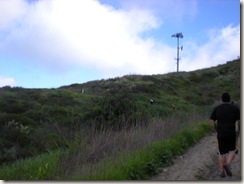 
It was a beautiful course.  I think I am going to have to take my camera along on all trail races from now on!

I carried my water today so I didn’t have to stop at the water station.  It made a difference and I was able to pass quite a few people that way.  Once we hit mile two, the course went downhill and I was able to fly.  It was fun.  I think my confidence is increasing on the downhills.
The course went down a road for a while and then went back into single track.  It was really fun.  There were a couple of spots that had sand.  That wasn’t so fun.  I don’t remember that from last time.  I think that it had rained the day before. 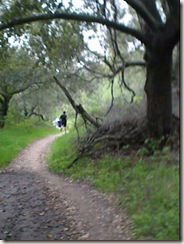 See that guy in the distance?  I passed him at the end.  Woo hoo!  There was a guy right on my heels during the single track part.  I kept moving over to the right to let him pass, but he didn’t.  After a while, I decided that I didn’t want to let him.  It was nice feeling “chased;”  it kept me pushing myself.
*Kelly had stuff going on today and is also nursing a sore knee, so she didn’t make it with us.

Nice! There are so many cool races in SoCal. Congrats on another solid race.

Ok, that' a crazy-ass elevation chart, my god!! I should never complain about any of those that I have to run, anymore!

I have to admit, i don't like the single-track trails. What kind of trail shoes are you wearing? Cascadias?

It is the first time that I heard that you have to listen to a record before starts a race.