The past couple of days have been those beautiful Southern California days that make me remember why my mortgage is so high.  On Sunday, it was crystal clear and 70 degrees.   And I was able to fully enjoy it…

First, I woke up in the dark (dang, it wasn’t dark at 6:20 on Saturday!) after too little sleep to go to the “new member” run for the Southern California Trail Headz running group.  I was a little nervous, since I was meeting new people for the first time.  However, I knew that Glenn would be there and we were running in Peter’s Canyon where I have run before, so I felt comfortable if I had to run on my own.
Everyone was very welcoming and I wasn’t the only newcomer.  I was there for a few minutes and then I saw Glenn join the group.  He was going to run a shorter distance, since he is tapering for the LA Marathon next weekend.  The president* of the club gave some welcoming remarks and we were off.
I started running with two people.  Jen (who was also new) and the guy (I forget his name!) were very nice and we chatted for a few miles.  After a while, I realized that their pace was a little aggressive for me.  I let them pull ahead.  I was officially “dropped.”  I didn’t mind.  I had brought along my iPod and decided to listen to some music and enjoy the trails. 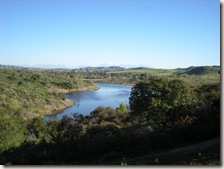 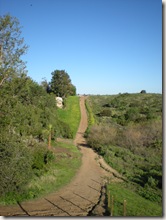 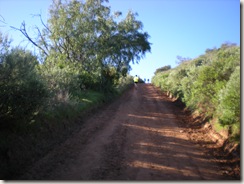 I ran around the lake and then took a different path back.  This one went up over the ridge and had some pretty big hills.  It was a good workout.  One of the members of the group, David, caught up with me and we ran the last part of the hills together.  I ended up doing a little over seven miles, I think.  I had forgotten to charge my Garmin, so I ran without it.  Because of the hills and the miles I ran with other people (who were a bit faster than me), it was a pretty tough run.  It felt good.

The group was great.  There were all different paces.  However, it seemed like everyone I talked to had run an ultra.  This is the group I need to join if I am going to run that 50k.  Nearly all of the big trail races have at least one member running.  This would be great for car pooling etc., not to mention having a friendly face around.

There were snacks and chatting afterward.  I really enjoyed it.  I am leaning toward officially joining the group!

After my run, I came home and told my husband and 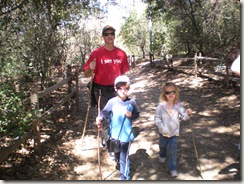 kids that it was a beautiful day and we needed to get out and enjoy it.  We went on a great hike at Oak Canyon Nature Center, which is a couple of miles from our house.  It is wonderful that such a fantastic trail and nature center is minutes from our house. 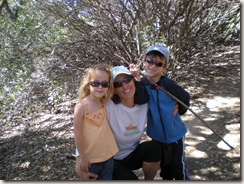 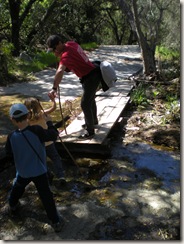 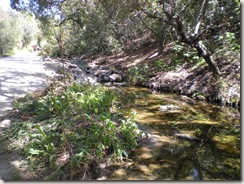 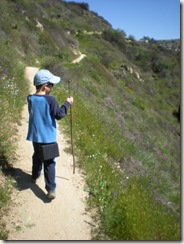 All in all… it was a great day.  Running with new friends and hiking with my family.   Life is good.

Well… she is the president of the Trail Headz!!!  I ran back to the park with her and chatted and she is as nice as can be.  She is also an ultra-stud.  Not only does she run half marathons and marathons in Crocs, but ultra marathons!  Seriously!  She is also training for Vineman Ironman Triathlon.  She is a serious athlete.

So “Croc Lady” is no longer just a story.  She is a real person with a name, Lorraine.   It’s a small world.

Love the Croc story, made me smile...When I lived in San Diego I never imagined running in those mountains but your photos are beautiful, I love reading the trail updates :)))

Sigh. When my kids were young we used to go over to Oak Canyon all the time. Take advantage of this age. They grow up so quickly (Yikes! My youngest starts college next year!)

If you do join the group, you'll get access to the calendar. There is somehing happning with the group almost every day of the week!

First I must tell you how much I envy your trails and surroundings! I love SoCal. I also love your story of the woman in crocs...funny what a small world it is.

Okay, you convinced me. I have to go trail running.

Still, I've gotta get out and run on trails! You make it sound so great!

Trail running scares the shiz out of me (I worry that I'll turn an ankle or something equally klutzy, but it is beautiful.

Today is another reason for the high mortgage, isn't it?

Awesome run and I can't believe you met the Crocs lady!

I am encouraged by all you SoCal runners finding all these great places to run...I'm moving back in August so I'm gonna need help and referring to these kinds of posts should do just that!

First, hilarious about the crocs! i can't even imagine running in them, much less the distances she's covering. Secondly, this post made me (yet again) incredibly jealous of where you live. How amazing that you get to run in such gorgeous settings!! Let me tell you, there is nothing to brag about running in Indiana. LOL!! Have fun with your new running group!!

OMG how can someone run ultras wearing crocs??? Is she planning on doing vineman with crocs? what about the bike portion, does she wear crocs on the bike too?

That's wonderful you finally got to meet that croc lady, and I am glad that you have been able to find other trail runners out there. Your trails are SO much different than the ones here on the East Coast. Here you are constantly under a tree canopy. I just don't feel safe running them, that's for sure. And there are no trail running groups that I know of.

So glad too that you get to see Glenn, he seems like such a nice, genuine man.