This race was HARD.  It was more than twice as long as last week's race and twice as difficult.  Here is a glimpse of the elevation profile from my Garmin.  Yikes.
This race was a leg workout extraordinaire!  There was a LOT of running uphill or downhill and very little flat.  The climb starting at mile 6 was 1400 feet over 1.4 miles!  The grade for that section of the race was over 20%.  To put that in perspective, my previous hilliest races were La Jolla Half Marathon and the trail race last week. La Jolla has a hill with an elevation gain of about 450 feet over two miles and O'Neill Park has an hill with an elevation gain of about 550 feet over two miles. La Jolla has 960 feet of climbing over 13.1 miles where today's had 3107 ft of climbing over 13 miles.
But I am getting ahead of myself.  I would like to start at the beginning....*
I woke up this morning to rain.  Thanks to Glenn, who told me about the race as well as pointed out the joys of running in the mud, I was determined to go no matter what the weather.  Due to scheduling issues, I wasn't able to rally anyone else to drive the hour drive with me.  By the time I hit the road around 6:45, the skies had cleared.  It was a gorgeous morning! 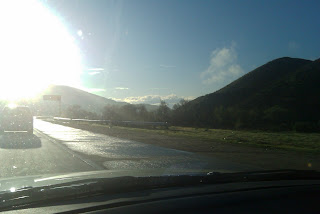 There was a bit of traffic (always in this area), so I was starting to cut it closer than I would have liked.  I drove up into the mountains and then turned off toward the campground where the race was.  Instead of going through Orange County, I drove into Riverside County.  Google Maps told me that it was fifteen minutes faster.  That was because there was more time on the interstate than the windy two-lane highway.  Unfortunately, most of the runners came in from the west.  My directions were brief on the website and there were no balloons showing me the way.
As I am driving up a wide one-lane road into the mountains, I started wondering if I was going the right way.  There were no other cars.  No markings.   I finally came across a campground.  It was not the Bluejay campground that I was looking for.  Thankfully, there were some campers there making breakfast who told me that the other campground was just down the road.  Phewww....   I hate being lost.
I finally found the cars of the runners and parked.   I started talking to two women while walking down to the start.  They were Kate and Cindy.  I explained that this was my first real trail race.**  I was nervous.  I knew that there was a lot of elevation change.  They told me that there was even a creek crossing!  They had run it a couple of weeks ago in the pouring rain.   It was Cindy's first time.  They reassured me that I would have a great time.
In the starting area a very friendly gentleman came and welcomed me.  He even gave me a hug.  I recognized him as the race director Baz Hawley.  What a wonderful person.  He completely put me at ease.  The day before, I had e-mailed him asking if there were still spots available.  I also asked him how scary the course was in the rain and mud.  His response? "Not scary... it is magic... you will love it.  BAZ" 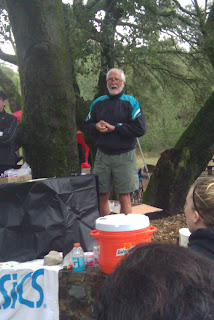 Then I saw a familiar face.  While I have never met Glenn in person, I recognized him from pictures from his blog and Twitter.  I walked up to him and said hi.  I love meeting bloggers in person.  We learn so much about them through their blogs and other social media, once we meet them, it is like we already know them. 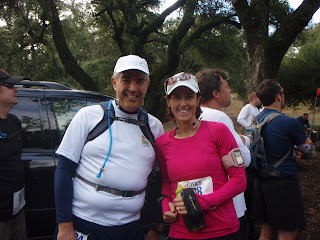 This race was so laid back and low key.  All the announcements were made by hollering over the crowd.  The RD, Baz, scolded runners for talking while he was talking.  He knew most of the runners by name and teased them mercilessly.
I had no idea what to expect in terms of time.  Should I go out slow?  Should I run faster while I can?  I really liked the lack of the pressure of the clock.  If this was a half marathon, I would be thinking about splits, pacing, PR etc.  In a trail race, because they are all different, PR's are out the window.  It is all about running.   It is ok, and even encouraged, to walk when the terrain gets tough.
So we were off.  We ran along the road for almost a mile.  Then we headed into the hills.  It was a gravel and dirt fire road.  Things were pretty social along here.  It was nice and wide.  I chatted with several runners.  There was a couple, Melissa and Hugh, who were very nice.   I came up on Kate and Cindy and ran with them for a bit.  It started getting pretty steep and just about everyone around started to walk.
The views were spectacular.  The sun was out.  I took this opportunity to take my phone out and take a couple of pictures.  I still have a hard time getting a clear self-portrait. 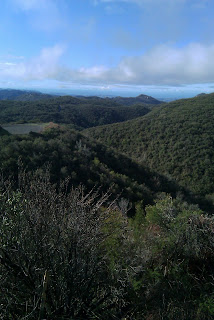 Yes... that is the Pacific Ocean in the distance. 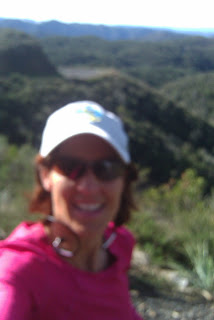 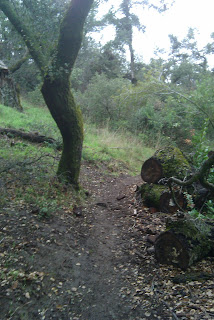 Other than my three marathons, this was the hardest race I had ever run.  It was also the most beautiful.  I ran into the finish to see Baz cheering me on.  He high fived me as I crossed the finish line. 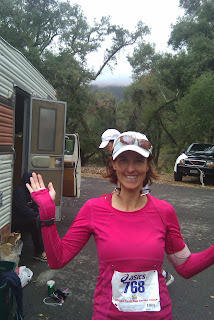 After the race
Later, I cheered on other runners coming in.  I saw Kate and Cindy, who had been so encouraging. 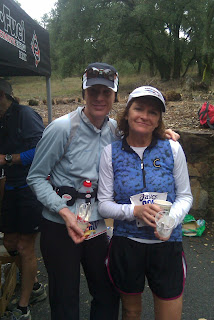 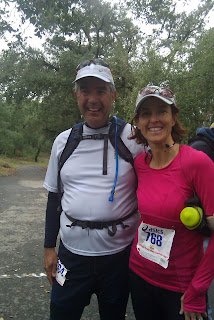 Glenn posted a great video of the entire race.  It really shows a lot more of the terrain (I didn't get my phone out much to shoot pictures).  Check it out here.
My time was somewhere around 2:46 (I forgot to turn my Garmin off right away).  It was great to forget about the Garmin.  I rarely looked at it the entire race.  Splits didn't mean anything.  The winner ran it in 1:36!!  Holy cow.  I think he must have run all those hills.
It was a great race and I'll definitely be running more trails!!
Happy Running.
* Of course, I couldn't do a short, concise race report.  Detailed (aka wordy) is my signature.  ;-)
**I'm not sure if last week's really counted, since it was only five miles.
Posted by Lisa at 8:30 AM

Sounds beautiful, and tough, and fun, and killer....all rolled into one!

Impressive! I thought of you today when I was running over small snow mountains and through puddles and mud in my very urban area. It pretty much convinced me that trail running isn't for me LOL.

awesome race report and I'm SO GLAD you enjoyed your race! It's an amazing difference when you start to "run those hills aka hike" it so different than running on the roads-but I love it so much! Even though it's hard and brutal!

I'm very jealous! If I hadn't run pasadena today I would have joined you!!!

i can't wait to meet you and run a race with you...but don't plan on running with snail Penny

Lisa, you did great! It was a pleasure running with you too. Hope to see you again on the trails. Remember the new member run this weekend!

Wow, sounds amazing! They don't have too many trail runs around here, unless they are like some macho-man thing with half-naked ladies and free beer. lol

It's so nice that you run because you love it. Matthew is still nursing an injury from before his Disney marathon that is PLAGUING him, mainly b/c no one can figure out if it's a muscular issue or a stress fracture. It's on his butt, which is lovely. Anyway, it's so hard for him b/c he hasn't been able to do anything, and he misses it. I'm so glad you're able to go out and do fun things and meet new people.

Sounds like you had a great time. I've gotta try running trails like this, you make it sound like so much fun... except for the elevation profile thing, Yikes!

Great race report Lisa! I'm getting caught up with all my reading....

It was great meeting you out on the trails! Hopefully we'll get a chance to meet again soon!

I'm eyeing a couple other trail races - Billy Goats Half and <a href="http://trailrunning.dirtyfeet.us/hardinghustle/> The Harding Hustle 18K </a>. The second one is over by you along Santiago Canyon.

It sounds like this was a really amazing race! I would love to do a trail run sometime, and I loved reading your account of the scenery and everything that was going on--it gives me a good idea of what to expect in terms of what's going on in your body and on the terrain.

Congratulations on this one! Also, I wanted to respond to the comment you made last week on my blog: I like the idea of writing a few sentences about each race, but think I might just post the race reports after all. A lot of them are already mostly written anyway so hopefully it won't be that tough!

i can't wait to meet you and run a race with you...but don't plan on running with snail Penny