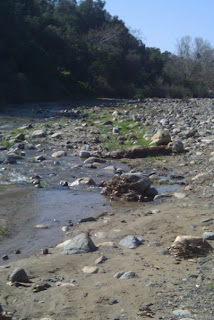 Saturday morning, I ran the first part of the OC Chili Winter Trail Run Series. It is an approximately five mile race through a beautiful wilderness area*.  Proceeds of the event went to Trails4All, which helps to preserve the 700+ miles of natural surface trails in the Orange County area. It was a great little race that I plan on repeating in March and April! 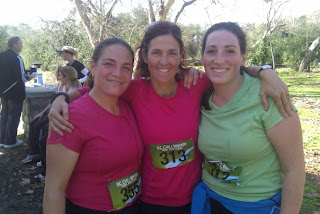 Kelly and Heidi came in about eight minutes behind me.  They both enjoyed their runs a lot.  It was a beautiful and challenging course.  It was a nice change of pace from our regular Saturday runs.  I really wished I had brought my camera or phone to take some pictures.  Maybe next time!  There are two more races in this series and all three of us are ready to come back in March and April.
Wow... this is a pretty long race report for a relatively short race.  Thanks for reading.
Happy Running....
My splits:
Mile 1- 10:20 (ran pretty fast at the beginning and then hit a bottleneck at the stairs)
Mile 2- 12:20 (a LOT of very steep, rutty hills)
Mile 3- 9:00 (half a mile of hills and half a mile of steep downhill)
Mile 4- 8:52 (through the single track)
Mile 5- 8:22 (back on pavement with a little gravel at the end)
*It was such a wilderness area that as we pulled into the park they handed us a flyer on what to do when encountering a mountain lion.  The ranger told us about lion sightings and told us whatever we do, don't run.  Uh... we were running a race!  We decided that whatever we do, run faster than at least one person!

**I had invited blogger Penny to join us for the run, but with her crazy work schedule she needed a day off.  I know she would have hated the gorgeous sunshine.  It got pretty hot, especially on the steep uphills.
***As it was, I wasn't completely over the chest cold and the run made me get even sicker.  The last two days have been spent coughing and losing my voice.  I guess running hard wasn't such a great idea.  My body, still technically recovering from the marathon, just quit fighting and let the virus take over.  That happened to me after my first marathon, as well.
****Yeah.... chicked them!
Posted by Lisa at 2:34 PM

Neat Lisa! About the passing business - I've run a couple of trail races and volunteered at an ultra this past weekend - my experience is there is more value put in finishing the race than the time involved.

Are you going to cross over to the dark side of trail running? I think I am after the L.A. Marathon.

So... was there actual chili at the end of it, or was that just a cheap pun to keep your mind off the cold?

I demand delicious food after races! :)