Before the Race:
My alarm went off a little after 4. Yikes. I was very tired. For two nights in a row I have had very little sleep (I blame my cat-- and that is a completely separate post). I scrambled around trying to get everything I needed. I was suddenly getting a little nervous. I picked up Heather and headed north to the Del Mar fairgrounds.

I had a sweatshirt that I was going to throw away, but when we got out of the car, it didn't seem that cold. I had my arm warmers, so I left the sweatshirt in the car. Standing around for an hour or more, even 50 degrees starts feeling REALLY cold. 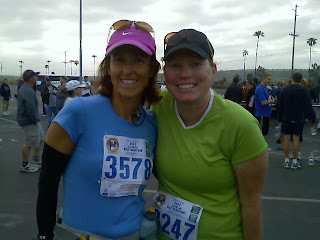 My teeth actually started to chatter (I know, I know... I am a Southern California WIMP).

My friend, Heather, was REALLY nervous. This was her first half marathon. The farthest she had run was ten miles. Her plan was to take it easy and run conservatively so she would finish for sure. Her only goal was to finish within the three hour limit.

I was thrilled when I spotted a neon green/yellow shirt and white hat. It was the famous Alice! I finally was able to meet her in person. Funny thing is that we live only a few miles from each 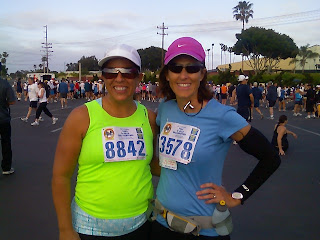 other. I found out that her kids have been going to the school where my son is starting in August. Small world. And she is just as funny and nice in person as you might imagine.

I was excited for the race to start. I had a plan. I knew that if I followed my plan, I would finish under two hours. I wanted to start and run the first miles around 8:45, slow down around 10 minutes/mile on the hill and then pick it up on the second half and run how I felt.

During the race:
I know I have written about the insane elevation profile of this course. Even though I ran THE HILL and trained for the race, it was actually a little harder than I expected. I was mentally prepared for two hills: the one through Torrey Pines Reserve and the one just past mile twelve right before the end. I don't think I even thought about the other ones. They took me a little by surprise.

Here is a copy of the elevation from my Garmin and a little play-by-play of the race: 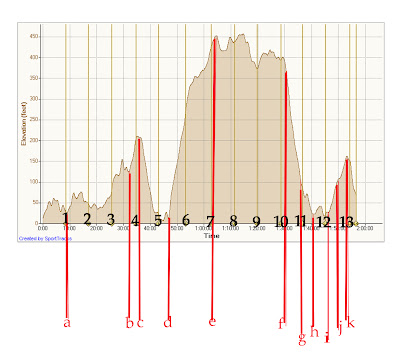 b- WHAT??!! Where did this hill come from. Nobody mentioned a steep hill this early in the race. Holy moly! It was short, but steep. That mile was 9:02.

c- As we crest the hill out of Del Mar, the ocean opened out in front of us. There is a straight stretch of highway with wetlands on one side and ocean on the other. It is a beautiful view. And there, in the distance.. is the HILL. You could see the runners like ants crawling up the trail. This picture (courtesy of westcoastroads.com) shows the view and if you look just left of center, you'll see the beginning of the HILL.

I am a little bit of a chatty runner. It is funny to see how people chat back in the beginning but not so much toward the end. As we ran down this stretch, I commented on the gorgeous view. Several runners agreed (myself included) that a view like this makes the hills worth it. That mile was 8:22.

e- Woo hoo! We are at the top! There was a lot of whooping and hollering among the runners. I chatted with one guy for a while who said that it was all downhill from here. I told him that he was a liar. He laughed. His goal was to finish under two hours as well. We both agreed that we were in good shape and only had to make up a bit during the downhill miles. The mood among everyone was pretty high. My friend, Heather, said that when she arrived at the top, one of the women decided to hop on the sag bus. Heather tried to talk her out of it, telling her that the worst was over, but she said that she "was done." Man... what a bummer.

g- Ow, my knees are starting to ache a little. My quads are feeling it. I like running down hill, but it is hard to keep from going too fast. Some people blew by me on this downhill, but I really just tried to go with gravity rather than accelerate at all. I did that mile in 8:03-- flying!

i- Well... here is the last hill. No need to hold back on this one. I am pretty tired by this time, but I know we are almost through. As I passed the clock at mile marker twelve, it said 1:48. I knew I had twelve minutes to get to the finish and see the clock still have a time under two hours. The pressure was off...I could just enjoy myself (as much as you can on a steep hill in the twelfth mile of a race).

j- We are pushing up the last part of the hill. One of the spectators yelled, "you just need to get up to the light and then it is down hill!!" I pushed hard. I wasn't able to keep my pace up. That mile was 8:57. I did, however, pass quite a few people along here. That felt good!

k- Woo hoo!!! The final stretch is here. It is all downhill for the last quarter mile or so. I ran it at a 6:45 pace. The worst part of the final stretch was the uneven ground. There were cobble stones etc. and I was a bit worried about rolling my ankle. Luckily, the last few yards were on grass and I could really fly. I saw that the clock said 1:57. I threw up my arms because I was thrilled that I met my goal. I was only four minutes off my PR on a MUCH more difficult course.

After the race:
I hung out in the finish area for a while, took a finish picture, ate some bananas and oranges. I knew I had a bit of time before Heather finished so I went to the beer garden and grabbed a beer. It didn't taste as good as I had hoped. It was Budweiser... not really my favorite**. I was also standing there drinking it by myself. I felt like a dork. I didn't want to miss Heather crossing the finish line, so I left the beer garden and headed to the finish line.

I saw Alice finish strong. I screamed as she ran past, but there was a lot going on-- I don't think she heard me. She had mentioned earlier that she didn't have high hopes for the race, but she looked great and finished well ahead of three hours. Heather came in with about ten minutes to spare. 2:50! I was so proud of her. She was THRILLED. She had just completed a very difficult half marathon. She felt great afterward and started talking about how she could have gone faster. She is already planning her next half. She's hooked.

It turned out to be a fantastic day. Successful races for myself and my friends and a gorgeous San Diego day (it was sunny and 65 at the end of the race).

*the race literature stated pretty specifically that iPods are not allowed. I love my music. I figured if they had a problem, I could stash it in my hydration belt. Like I suspected, plenty of other people were wearing headphones. It wasn't a problem at all.
**not like the 5K on Thanksgiving when they had Stone Brewery supplying the beer. That was a tasty treat.
Posted by Lisa at 3:39 PM

WOW !!, I'm so impressed. That hill looks like a killer.
Congrats on such a great race.

OK that was SO much fun to read! :D

Tell Heather congrats for me! :D

I so enjoy reading your race updates. It makes me almost want to train for a half marathon...ALMOST! :)

You rocked it! I have no doubt that you will run your next marathon in under 4 hrs.

Great race report and hooray for arm warmers! I LOVE mine. I'm so sad that it's just about time to stash them for summer! Anyway, I think it's safe to say that after a speedy half on a crazy hard course like that you are well on your way to a sub-4 marathon! Congrats again!

And GREAT JOB, Heather, on such a strong first half-marathon! You are AWESOME for tackling such a difficult course your first time out! Isn't it fun? :)

Awesome report...look at you with your embellished graphics. Very impressive!

Yeah...I was surprised by that little bump around Mile 4 too...I wasn't expecting that at all.

You were right, I didn't think I'd run the race all that well, but it was a very good day...for everyone. I LOVED getting to meet you and Heather (congrats Heather! on your first 1/2 Mary!) Congrats to you on conquering the hill and on the sub 2hour time. You are a rockstar!

I'll be cheering for you (from the sidelines) for the RnR!

Congratulations on doing so well on such a hilly course!

That was the most impressive race report/experience I have ever read on a run. I ran this race also and I could not have expressed the experience any better. Awesome! This was my third La Jolla Run. My first finish time in 2004 was 1:57:00 just like you. I was able to improve this year to 1:38:01 I hope to read some future race experiences from you
Chas BIB 406

Now that the USATF has kind of loosened its stance on the headphones, I don't think you will find many races actually disqualifying people. The way i look at it, unless you are running for cash, they won't really bother you.

Great race report. Your splits are what I do for 5Ks, I can't imagine those many miles under 9 minute pace!

Thank you for continuing to inspire me.

That course is insane! Great job! I'm so jealous of your sub-two hour half.

What a great, smart race you ran!

EXCELLENT LISA!!! You are keeping me motivated and I love it!!