Taper for Hood to Coast? NOT!

I know that some of my teammates might be taking it easy this weekend in preparation for some tough runs later this week. No easy run for me--I had a twenty mile run on my schedule.

I am training for my sixth marathon. One thing that doesn’t change is that twenty miles is still a very long way. It may sound crazy, but it is those super long runs that fill me with dread and terror I like the best. I get pretty impressed with myself.  In fact, last night at a family get-together, I heard myself say, “more pasta? why yes…because I am running twenty miles tomorrow” and “oh, no salad for me, I am running twenty miles so I don’t need the extra roughage.”  TMI?  Probably, but runners get it.* By the end of the night, everyone knew I had twenty miles on the schedule.  It is not like it is the first time, but damn it…it is impressive and I wanted my loved ones to know. Does anyone else feel like telling everyone when you run a significant amount of miles?

I was concerned this week when our schedule was turning out that I couldn’t run with the group for the long run. I have done plenty of long runs by myself. In fact, I have trained for two marathons pretty much on my own.  But I have been spoiled this year and rarely run by myself. I put a plea out to my facebook friends for someone to run at least part of my run with me.  The thought of running 3+ hours on my own was a bit overwhelming.  One of my friends, Angela, made a comment that if I didn’t live so far away, she would join me for 10 miles.  Ummm…I am totally willing to drive a half hour to run with a friend.  Ironically, Angela and I have never run together.  She and I are colleagues through Body Back. She told me she was nervous that she would slow me down.  When I heard about her 3:51 marathon and 1:41 half marathon I thought I would slow her down.  It didn’t take long before we were running, talking and going at a perfect pace for both of us!**

Before I knew it, we had chatted away the entire ten mile loop.  Isn’t that the best thing about good running friends?  A long run doesn’t seem so long anymore.  And had she been ready for it, I think we could have run the second loop without having much of a lull in conversation.  It was a great start to my long run.

After saying goodbye, I headed off to run the same loop again. We were at Newport’s Back Bay, which I always love. I didn’t notice the scenery much the first time since we were chatting so I turned my music on and really enjoyed the route.  It wasn't as fun as the first half, but I was feeling great! 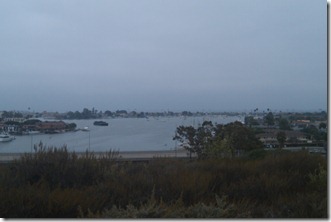 Around mile 14, my IT band started bugging me.  I stopped at miles 15 and 18 to stretch.  It helped, but the pain was a good reminder that I need to roll my IT band every day.

The last few miles were getting painful.  Between IT/knee discomfort and the regular hip-to-toe pain that comes with a really long run, I was ready to be done.  I wanted to see if I could kick up my pace again. I sped up for the last mile.  It felt like sprinting, but I was able to run mile 20 at a 8:32 pace!!  That is 10 seconds or so faster than my marathon goal pace. I am not sure if I could keep that up for a long time, but at least I knew I had it in me.

I finished. I was done. My legs hurt all over, but I was pretty happy with myself. Once again, I had that familiar desire to stop a random stranger and tell them I just ran twenty miles.  I didn’t, but I wanted to.  Oh…and I ran it about 30 seconds faster than marathon pace. I’m a happy girl. 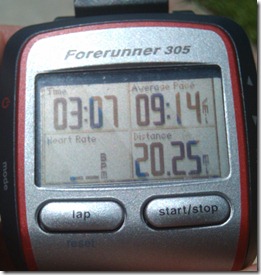 So now that my first twenty miler is in the can for this training cycle, I will be back to my regularly scheduled obsessing about Hood to Coast.  Did I mention that it is in five days??


*And even without the extra “roughage” I still had to stop at a bathroom!  Ugh…more TMI.
**We ran just over 9 minute miles, which is a bit faster than I had planned, but it did wonders for my confidence.
Posted by Lisa at 5:21 PM

Lisa! It's so funny I was biking on the Newport Back Bay loop too!

I'm sorry I was never better about scheduling a run for us - and glad this one went well. We will definitely have to run after HTC.

I'm not really tapering (although I guess I'll take thursday off?). My mileage usually sucks though so my life is kind of like a taper :).

I won't be tapering either :) 16 miles this weekend was my idea of *trying* to take it easy!

When I was training for my marathon last year I made a game of seeing how many people I could tell about my long runs. The guy at the fruit and veg market. The check-out chick at the supermarket. The teller at the bank. How I managed to slide it into the conversation, I can't remember but lots of people got to hear about it whether they wanted to or not.

I'm with the bunny…my life is one big taper :P