There are eight more days until my daughter starts kindergarten. She is so excited she can hardly stand it.  Big brother is happy to have his sister at school with him. That is a big milestone in our lives as I will have both my kids in school full time. Then the pressure starts to get this business really off the ground!

Oh yeah…something else is happening in 10 days.     I AM FLYING TO SEATTLE TO START MY HOOD TO COAST  ADVENTURE!!!
Here is a little more about the race (and my leg in particular), for those of you who aren’t familiar with HTC or long distance relays in general.

What is Hood to Coast? It is a 200-mile relay that is run by teams of 12. It starts at Mt. Hood, the tallest mountain in Oregon, to Seaside on the Pacific Ocean.


Known as "The Mother of All Relays", HTC is the largest relay in the world, hosting a capped team limit for the past 20 years, and has filled on "Opening Day" of registration for the past 13 years!HTC is also the longest running relay event in Oregon, and hosts the largest beach party on the west coast!

Here is the timeline for the weekend:

Thursday, August 25—After dropping my baby off at kindergarten, I head to the airport and fly to Seattle (Nuun headquarters) to meet the teams (Nuun Platuun and AfterNuun Delight). There will be van decorating, pizza eating and general revelry.

Friday, August 26—Four vans of excited and nervous women will take off first thing to drive down to Mt. Hood (just east of Portland).  Our vans will be festooned with quotes and decorations supporting our respective themes.  I am guessing that there might be some interesting looks along the freeway on the way to Portland and maybe a few honks.

The teams are all given start times ranging from early in the morning to early evening. to keep the course and exchange points free of too much congestion.


“The race start times begin at 3:30am Friday at the Timberline Day Lodge and continue in waves every 15 minutes throughout the day until 6:15pm. Each wave has 20-25 teams.”

Our start time is 12:30 p.m. I am excited that both teams are starting together!

I am in Van 1.  Starting us off is Major Miles.  She has the honor of running the leg with the steepest downhill grade.  It is notorious for being incredibly difficult. I wanted this leg at first, but then when I thought about my marathon five weeks later, I decided that a quad-busting, toenail destroying, knee-shredding 2000 foot drop over five miles would not be the smartest choice.  Yeah for Tricia taking one for our team!

*Leg 2 belongs to Captain Cupcake. Then Captain Phoenix, our team captain.  She is followed by Captain Obvious and Captain Underpants.  I am the final runner in van 1. 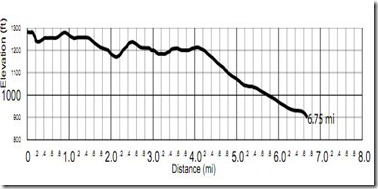 It is described as “challenging uphills and gradual downhills along Highway 26 on paved shoulder.”  Actually, running along highway 26 gives me more anxiety than any other part of the race. I grew up in this area and drove to Sandy and Mt. Hood often along Highway 26. It is not a lonely highway.  It is a major thoroughfare—the only road from Portland to the mountain and the small towns in between. I know that giant trucks will speed by, scaring the crap out of me and blowing all sorts of road dust my way.  On the bright side, it will bring back some great memories of driving up to the mountain to go skiing as a kid.  I will be running by several well-know local landmarks.
After my leg, our van is done for a while. I am hoping that we will stop somewhere for some real food.  The van will be fully stocked with all sorts of snacks, but at some point in a 24 hour period, hot food will be a welcome treat.

Our van will be back at it around 10 p.m.. Now we are on to some of the toughest legs for the mere fact that they are done in the middle of the night. I am thrilled, however, that our van’s dark legs are late night rather than early morning.  Our best chance to catch some z’s will be after these overnight legs.

My next leg will be leg 18, which is 5.23 miles long. It is described as “flat and gradual uphill terrain on hwy and paved back country roads.” It is also rated “hard.”

Hmmm…”back country roads” at 2 a.m.??  Yikes!  Maybe I should add my pepper spray to the list of things to pack.  I will be wearing a light on the front, a light on the back, as well as a reflective vest.  What will the coyotes be wearing??

Our final legs get us closer to the beach. My last leg is my easiest leg (woo hoo!).  Leg 30 is rated “moderate” and is 5.35 miles long.  It is described as “gradual uphill and steep downhill on winding narrow back road with minimum shoulder.” This time, I am really looking forward to being on a country road. It will be around 11:40 a.m. so darkness won’t be a factor.  In fact, it should be a lovely time of day!

Then van 1 is DONE.  We get to head to Seaside to wait for our team!!  I am excited for that part of the day.  I have two friends from high school who are running HTC and they are both in van 1 for their teams. We are planning on toasting our success with a well-deserved beer.

The final runner for Nuun Platuun, Commando, should be approaching the beach around 5 p.m.  Tradition says that all twelve runners join her and cross the finish line together.  I am sure that will be quite a moment.  I can’t wait. Then HTC hosts a huge beach party with food and music….and probably more beer.

Sunday, August 27-- We will make our way back to Seattle in our vans.  Some of the team is staying over Sunday night.  I need to get home. I fly out of Seattle Sunday evening. I will have missed pickup for the first two days of school and I want to be there to start my kids' first full week of the school year.

This adventure will be documented by twenty fabulous bloggers who are very social media savvy.  We will all be tweeting and posting to facebook along the way. If you would like to follow along on our adventure, check out our Facebook Page as well as our Twitter accounts: @nuunplatuun and @afternuundelite.

Thanks for reading and supporting me on this adventure!  This is a pretty long preview of my race.  I can’t imagine how long the actual race report is going to be!  It will all start a week from tomorrow.   EXCITING!!

What part of a race like this would you look forward to the most?  What would you be dreading?

*I am not going to go through each leg in detail in this post.  I might, at some point, describe each leg, but that would make this post very, very long.
**There is a spreadsheet that takes difficulty of legs and runner 10K times and predicts the length of each leg.  They have been perfecting it for years and apparently, it is pretty accurate.
Posted by Lisa at 10:45 AM

That is some big stuff coming up! Hood to Coast and your daughter going to kindergarten! Have fun and good luck I can't wait to read all the Hood to Coast recaps!

I'm running Leg 6 this year too! It is one of my favorites. Don't worry about the Hgwy 26 portion - it's a really big shoulder, and not bad at all. The great thing about leg 6 is that your middle leg is OFF of highway 30 - which I actually prefer. Less traffic - if the sky is clear you can run by moonlight. Don't be nervous because: 1) there are almost always other runners and/or volunteers out there and, 2) they usually have a motorcycle patrol going back and forth on the route for safety. The middle night leg is actually usually my favorite. You will do great! :)

Ooh Goodness good luck!!! U have quite the race ahead of u but I know u will be amazing. I am way jealous what an awesome opportunity!!!! Good luck!!'

Soooooooo freakin excited! My favorite part will be when you all join me for that last little bit…I will be crying :)

I am so looking forward to this for you! Have a GREAT time. I'll be following along...

EXCITED TO meet you!!!

Shoo starts K this year as well. It's going to be so strange...

Hey I am running leg 6 too! But my team starts at 11 am. We are called "Where is my monkey butter?" Maybe I'll see you great Nuun gals on the course. Good luck!