Body Back Recap—results and revelations

I completed my Body Back program a couple of weeks ago.  As you learned from several earlier posts here, Body Back is a series of high intensity interval workouts (HIIT) accompanied by a meal plan in a supportive environment of women.

I learned some key things during this eight week journey:


* I can push myself harder than I thought I could
* I sometimes grunt when I am really digging deep.  Who knew?
* I really can make time for breakfast every day (more than just a Luna Bar)
* I.am.strong
* I can hold a plank about two minutes longer than I thought I could. I just needed to be willing to sweat and shake.
* I never stop being inspired by other women.

I am pretty fit and have been for a while. I have run five marathons, some of which needed quite a bit of mental toughness. Yet, the eight weeks of Body Back humbled me and reminded me that I have a long way to go in my fitness journey.

I found myself pushing myself harder than I have in my personal workouts in a long time.  The program made it easy to push, even on those days when I stayed up way too late and felt exhausted and not in the mood to work out.  Most of the workouts are organized into little bite sized pieces. We would do an exercise for a short duration such as a minute or two. You can do just about anything for a minute, so it allows you to push that much harder during those sixty seconds. Allison, our instructor, would give us cues, such as “only ten more seconds.” I knew that I could get a couple more pushups in or lift my knees higher for those last few seconds.

As I was digging deep in an exercise, I would catch myself grunting or making some other sort of not-so-attractive sounds. Vanity goes out the window when you are that focused. Often I would be sweating and red in the face, but didn’t care. If I did look up and see one of the other women, they were working just as hard.
The food plan was a big surprise to me. At first, it was hard to pay so much attention to my food choices. I am not a big fan of diets. Luckily, this isn’t a diet. It is a meal plan that focuses on making healthy choices.

We didn’t count calories or weigh our food or anything like that. The plan calls for a healthy breakfast (preferably with plenty of protein), a decent snack, lunch, another snack and then dinner. It is about education not deprivation. It focuses on whole foods and limiting serving sizes.  Not rocket science.
What was great was that after a while a lot of the habits stuck. Even after the program is over, I am finding myself making a nice breakfast where I used to rely solely on bars, protein drinks and coffee. During the program I cut out two of my biggest “vices”: soda and cheese. Well, I didn’t cut out cheese entirely. I still used some cheese (mostly low fat) but I did cut out the snack cheese that used to dominate my snacking. I used to eat several pieces of cheese while cooking dinner, for example. I also still try to eat healthy snacks instead of getting myself so hungry where I don’t make the best choices.

On my first day, I did a plank for 2:36. I decided that I wanted to set a goal to hold it for five minutes.  I told the group.  On the last day, I thought to myself that three minutes was probably a more reasonable expectation. Before we started, a few of the girls said to me, “so, Lisa…you ready to do this for five minutes?”  Busted.  Now I have been called out.  After about two minutes, it started to get difficult.  I looked up to the other woman, Angela,  attempting five minutes and she was going strong.  After a while, everyone but the two of us were cheering us on.  At four minutes, I said to Angela, “we can do anything for a minute, right?”  My entire body was shaking, sweat was dripping down my face.  We hit five minutes and kept going.  I made it to 5:38!!! (and so did Angela, btw).  I never would have done it alone. The women surrounding me pushed me forward to not only reach my goal, but surpass it.  I have found that surrounding myself with supportive women can help me do anything from running my first marathon to dealing with the stresses of being a wife and mother.

The class was everything I had hoped it would be. The women in the class had fantastic results as well.  We had a woman as young as seventeen and grandmothers in their fifties. The lowest improvement was 11% and the highest was 51%. Improvements took into account weight loss and strength.  The highest weight loss was close to 16 pounds (2 pounds a week is about as much as I would be comfortable having clients lose).  One woman improved her run from 12:39 to just over 9 minutes!  Another went from 11:45 to under 9 minutes.  This was done without any running training, just strength and added ability to push themselves. Average overall improvement among all nine women was 28.4%.  Average weight loss was 9.64 pounds.  Not bad for an eight week program!

So, in the interest of full disclosure, here are my results:

starting weight: 128.2 (definitely in the healthy range, so my goal was not weight loss.  However, that is at the higher end of my feel-good-about-myself weight)
ending weight: 121.2 (I feel great! Most of my “mommy pooch” is gone!) 5% loss

My measurements (bust, waist, hips, thigh) decreased by an average of 3.5%.  My overall improvement was 24%. 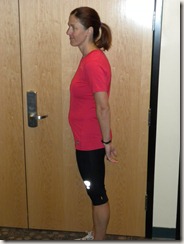 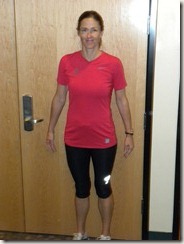 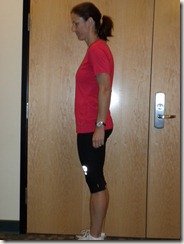 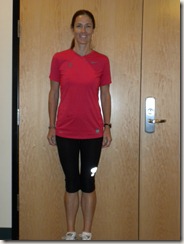 
My own class began today and I am so excited to see what these women accomplish. I hope to inspire them as much as I know they will inspire me.

That's really cool Lisa! You're right, it is amazing what we can accomplish with the help & support of others. The Body Back stuff sounds like it has been a lot of fun for you! I can't weight to hear about future classes! :-)

Sounds like a great program! Congrats on the results!

sounds like a cool program! great job on your results! the plank -- impressive. (the rest too, but i am exceptionally weak at planks)

Nice post. Although you need to increase meal frequency to lose weight naturally, you must be mindful of your caloric consumption. Calories consumed must not exceed calories expanded for your daily energy.Calorie weight loss will make you to lose your weight.

I was wondering how the class was going so I was thrilled to see this update from you.

I am so proud of you for pushing yourself like this. Amazing.

Okay Lisa. You were pretty fit to begin with. But this transition is amazing!

This post is so inspiring to me Lisa. I really look up to you :) I finally got up to 120, and now I really want to tone and get stronger and faster. I signed up for a local bootcamp class, I'm hoping it will give me similar results. I wish I lived closer to you, I would totally take your class! Those are fantastic results. Keep up the good work!

I just started Body Back this week.....found your blog by searching for more meal ideas and options. I'm excited to see what this program has in store for me! I have a 5 month old and am looking to get back to pre-baby weight or better! I hope to look better than before I got pregnant! High hopes! Thanks for the encouragement and inspiration!