This was a somewhat spur-of-the-moment race for me. I was on Facebook and saw an ad for this race. I thought, "hmmm...that might be a nice way to follow up the half marathon." I didn't run once all week, so I definitely wanted to run somewhere. I e-mailed the Rockin' Mamas to see if anyone wanted to join me. I thought it would be fun to run the four mile point-to-point race and run back to my car afterward for a total of eight miles.

Heather decided to join me. We discussed whether we should run four miles before the race. I was really tired last night and didn't really feel like getting up earlier than I had to. I had to get to the race early enough to register, so we would have to start running around 6 or so. Nope. We decided to start with the race and run the additional miles afterward. Unfortunately, Heather woke up this morning still suffering from her cold she had all week and decided not to run. So I headed off this morning by myself. I was still looking forward to it.

I arrived in La Jolla around 6:30 or so. Since the race didn't start until 8, parking was a breeze. There were no lines at registration and I was ready to go well over an hour before the race. While I was filling out my registration card, I looked up and saw AKA Alice filling out her registration. We're starting to run into each other more often now.

I decided to run a warm up mile or so. Lately, I have had a tough time getting into a groove early on in a run. I was able to warm up nicely. I did it at around an 8:40 pace. It felt relaxed. I knew that I could push it during the race.

I ran into AKA Alice again, as well as Irene. We all chatted for 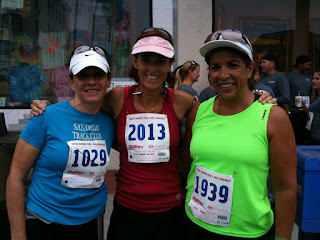 a half an hour or more while people gathered near the start. It was great to finally meet Irene after reading her blog for a while. I was able to meet her friend, Rich, and the Heffers. There was a nice mood among the runners. It was obviously a casual and fun race. Nobody seemed super amped up to compete (although I am sure plenty did).

I started out feeling pretty good. I had a couple finish goals in the back of my head as I ran. My lofty (and perhaps out of reach) goal was to break thirty minutes. My more realistic goal was to finish under thirty two. My first mile was 7:30 and I still felt OK, so I thought the thirty minute goal was in reach.

Unfortunately, I felt thirsty around a half mile into the race. I had opted not to carry my handheld since it was only a four mile race and four miles back. I planned to drink before and after and at the water station. I saw a girl run by me with a handheld and I had a sudden urge to take it from her! I don't think I drank enough yesterday. We went out last night and I had a couple of beers (something I rarely do). So I was dehydrated before I started sweating profusely in the muggy weather. I think I would have enjoyed the middle miles more if I didn't feel so dang thirsty.

The second and third miles were HARD. I realized pretty quickly that thirty minutes was an aggressive goal today. Mile 2 was 7:48. The water station was located around 2.5 miles. I needed to stop so I could drink. That mile was 8:03. The last mile was hard, but not as much since I knew that I only had eight minutes or so until it was done. The last half mile or so is straight and it is slightly downhill, so it is like a long straightaway. I ran that last mile in 7:33.

I found AKA Alice's friend (I think her Heffer name is Edith**) and we wandered for a bit. We found Alice and the others and headed to the after-race festivities which included free beer. I thought to myself, "I could have one beer and still run back to my car." Oh, how I kid myself. I socialized with the herd and enjoyed myself. When Mik handed me my second beer and Alice offered to split a breakfast burrito, I knew that my day was done with five miles. To seal the deal, they offered to drive me back to my car. Hmmm...running four sweaty miles after four tough ones OR breakfast, beer and good company. It was an easy choice!

And to cap off the morning, Alice and I got a little taste of local fame. A reporter was drawn to the Heffers' day-glo tops and wanted to interview them. Betty told her that Alice had a blog. Alice immediately pointed to me and said, "Lisa does too!" We explained that we met through our blogs. All I can say is thank goodness I never aspired to a career in broadcasting. Holy dorky. Here is our 15 seconds of fame:

*My Garmin says 31:04. There weren't chips, so I was at the mercy of chutes and tags.
**The Heffers all have pseudonyms, so not only do I have to learn names of new friends, I have to learn their pseudonyms. Ha ha ha...
Posted by Lisa at 3:35 PM

Great run, and congrats on your 15 seconds of fame! Don't you hate it when your Garmin says a time, and their wasn't chip timing? That happened to me once, so I e-mailed the race director, and he actually adjusted my time. I would try doing that. Congrats again!

i hate it when there isn't chip timing...either way, excellent time...and congrats on the 15 seconds of fame too...

Great job on the run, very cool about the blogger meet-up, and I enjoyed the video!

It was wonderful to meet you! I wish Kathy Loper Events would use a computerized chipping system. From what I understand it's not costly to do, and if it is I'd be willing to pay a few extra dollars to be chipped! We're at the mercy of human error, especially with so many people at these runs now. Any way, you still did great.

OK I thought you were on my BLogger list...apparently not because I am WAY behind on your Blogs.. OK off to check them out.

The ships we had were anklets that we handed back at the end of the race. If they anklet is not on the left leg it could mess up the other people and no register your time. Not sure why??

I'm glad you had a good run!! And how can you pass up free beer, breakfast and good company! Glad you stayed!!

OMG, I LOVED the interview! You ladies are so cute! Not dorky at all!! And wow, great job with the race! That is a SMOKIN' time! :)

You really thought that you could enter a bar with the herd and have only one beer...AND then run? hahahaha. I could have predicted THAT wasn't going to happen.

If all you know are the heffer names, that's completely OK too!

Had a really great time hanging out with you yesterday! We'll have to do it again soon! I'm even more doubly sad you're moving to OC now!

Believe me, you were no more dorky than the reporter! :) Congrats on a great finish and a fun race.

yayyy congrats on a great race!

Oh how awesome that you all got to hang out, AND get on TV. So funny! I agree with southbaygirl, I think you made the right choice to stay and hang out.