A 5K that certainly didn’t suck!

As I have said on more than one occasion: I don’t like 5K’s.  I have come to the realization that I don’t like racing a 5k (it hurts).  But I enjoy running a 5K when I am running with someone else and there is no pressure to go fast.  I ran a 5K on Monday that may go down as my favorite race EVER.

I ran a race with my seven-year-old son. I don’t write a ton about my kids here on this blog, but I am so proud, I have to write about him. Above everything else, I started this blog to document my running journey.  Having my kids inspired to run is such a big part of that journey.

Last week, when I picked up my shirt and bib for my 5K and 10k, they offered me a second shirt since I paid for two races.  At first I declined and then my son asked if he could have it.  It was a tech shirt (a nice score for a local 5K) and he told me he wanted to run in it.  “Can I run a race?” It was the first time he had mentioned wanting to run.  I told him that we would pick a 5K and train for it.

I knew that the following weekend was the annual Firecracker 5K and 10K. I thought, what the heck, I could sign him up for the 5K and he could run as much as he could and then walk the rest.  There would be plenty of walkers during the event. When I told him, he was SO excited!  That is all he could talk about for days.  Since I was injured* and couldn’t run the 10K as I had planned, it made me excited to run the 5K with him. 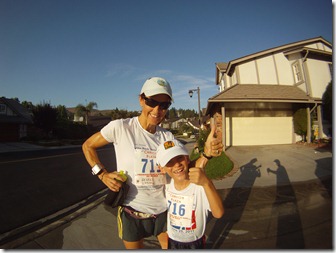 We live super close to the start of the race, so we warmed up by jogging to the start.  We were both SO excited! 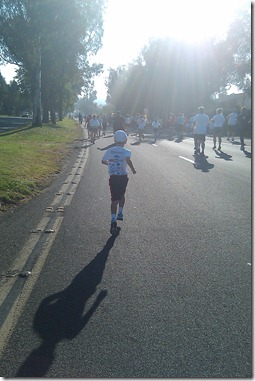 He took off after the gun went off.  One thing he needs to learn is pacing.  He either sprinted or walked.  He had a tough time finding a middle ground.

It was a hot, hot morning.  When the race started at 7:30, it was already well into the 70’s.  I carried a bottle of Nuun with me.  I am so glad I did. I read somewhere that kids’ bodies have a harder time regulating temperature than adults.  They also don’t recognize their bodies’ feedback, so it was my job to make sure he was safely finishing the race. 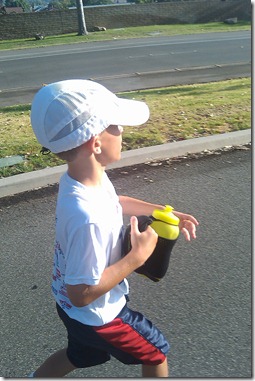 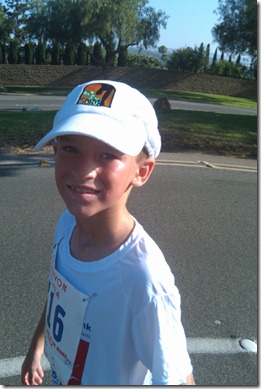 He took a lot more walk breaks in the last mile, but he did not complain once!!  He just walked a bit and then started running again.  When we got closer to the end, I encouraged him to run to the finish.  I knew he would want to look back at the last few hundred yards on the high school track** with pride.

And pride was all that I felt at the end.  He really pushed himself toward that finish line. We held hands crossing the finish line and I was so happy!  We finished in 36:51, which isn’t bad for a first timer who has never run any measured distance!

He was so proud.  He told people it was LONG.  But it wasn’t long before he started telling people that he wanted to run a 10K.  Oh…that boy is definitely his mother’s son!*** 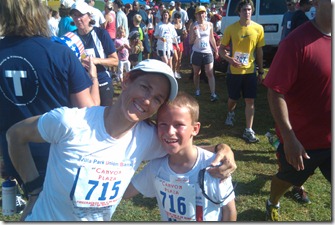 I hope you all had a wonderful holiday weekend.  Did you race on the biggest race day of the year?

Question for coaches, health professionals and parents:  how far is too far for a child?  My son really wants to run a 10K on Thanksgiving.  He’ll be 8. We would train gradually, but there isn’t a lot of definitive answers or age guidelines out there.  I want to make sure he stays healthy and becomes a runner for life.  What do you think?


*Somehow while pushing myself in the Villa Park races, I did something to my hip.  I could barely walk for about three days last week.  After resting for five days, I went for a run on Saturday and had to walk after five miles. I can’t get into the doctor for another week, so I am taking it very easy.  Luckily, the slow pace we did during the 4th of July run didn’t aggravate the injury.
**Daddy took some great video of the end of the race!  Once it is edited, I may post it.
***He might actually take after his father more.  I didn’t start running until I was 40 years old.  My husband ran when he was a kid and all the way through high school and college.  In fact, he still holds the record at his high school for the mile.  Unfortunately, he doesn’t like to run anymore, so I am on my own.  Maybe once the kids both start, he’ll make it a family affair.
Posted by Lisa at 2:22 PM

What a great bonding experience for the two of you :-). I'm sure he'll remember his first race for the rest of his life.

Sounds like a great time! Don't have a clue about your question about your son and the 10K, but good luck with that!

I love this post! So great that you shared this with him!

I hope your hip issue works out and isn't anything too serious!

That is such a cute picture of the two of you. Your son is adorable!

Both my kids have run/walked 5Ks with me in the past few years. Neither one of them paces themselves at all. Both want to run as fast as they can, then when they can't run any farther, they walk.

On the other hand, neither one runs much other than when a coach makes them (both play other sports), and it seems like they never run farther than a mile, so I'd imagine training is key. I think it's really hard for kids to think about running slow, but I think that's where I'd start...figuring out how to get my kids to run slow.

Either way, have fun. It's cool that he wants to run with you!

This awesome. i love that he did it with you! I am not sure of the answer but i would say proper training he will be fine!

So cute! Looks like he had a great time!

The rule of thumb that I've read is one mile per grade he's in - so if he's in 3rd grade, a 5K is about all that's reccommended he do.