I ran the Palos Verdes Half Marathon a couple of weeks ago. My friend, Joan, texted me the day before asking if I would like a free entry.  Woo hoo!  Procrastination worked in my favor.  I had waited too long to enter online and had planned on registering the morning of the race.  The catch?  I was running as her 19-year-old daughter, who was sick.*

I ran this race last year.  It was a hilly race with a great feel.  The weather was nice and overcast.  This year, the course had changed. They promised a flatter, faster course.  I’m not sure it was so much flatter or faster, but I can’t really tell because my Garmin decided to die--no elevation information. The weather was just as perfect this year.  It was overcast and a little drizzly. 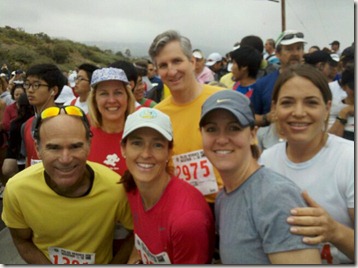 We had a nice size group and we were ready to go.  This was Kim’s first half marathon.  She ran track in college, but never ran a race longer than 10K.  She was pretty nervous.  It was the perfect race to “practice.”  She is training for St. George in October and has an aggressive goal of 3:30, so it is good to get some race experience under her belt.

We all started the race together (except Joan, who wanted to avoid the “speedy” runners toward the front and started a bit further back).  It didn’t take long for Jeff and Kim to take off ahead of us.  I was pretty happy that I kept them in my sights for quite a while.  Rod ran ahead a bit as well.  Kelly and I followed closely behind. At the first big downhill, Kelly zipped past me.  I didn’t push to follow.  I wanted to focus on running at my pace and exertion level.  I passed her shortly after that.  I thought about sticking with her, but I was feeling really good and wanted to maintain my pace.  We have an understanding that we would always run our own races, meeting at the finish line.

I felt like I was running naked. Well, not literally naked, but like I was missing major parts of my running accoutrements.  As I mentioned above, my Garmin died. I felt very strange without it, especially for a race.  I relied on that thing for pacing myself during a race.  What if I went out too fast?  What if they didn’t have mile markers (they hadn’t the year before)? What if I couldn’t do the math to adjust my pace?   In addition to that, I FORGOT MY IPOD!  What????  I have been running with the group so long that my iPod is not my staple like it once was for a run.  In fact, I can’t remember the last time I ran with music (probably my last half marathon).  But when I run with my friends, I don’t get bored.  We chat the entire time.  Two hours with no one to talk to? Nothing to listen to?  What would I do?  I decided it was a good test for me.  Let’s see how well I could pace myself and run a strong race relying solely on me and my internal voice.

I was pleased to see that I was running right around an 8:15-8:20 average for the first few miles (when the math was easy).  That was exactly where I wanted to be.  I knew I wanted to run faster than the prior year (1:53:19), but had a secret goal of running a 1:50.  I felt if I could run a difficult, hilly race at 1:50, then I was in good shape for a 3:49 marathon in the fall.  Things were looking pretty good for a good portion of the race.

At mile four, I passed Rod.  He told me that his legs felt like lead.  He didn’t look so good.  I asked if he was ok and he said yes, but that it wasn’t going to be a PR sort of day.  I knew Kelly was not too far behind me and I went on my way.

I felt good.  Around mile seven or eight I actually felt great.  I was in a really good rhythm and felt like I could run that pace for a long time.  I did rudimentary math (although my math skills fly out the window while I run) and figured I was on pace to run right around 1:50!

Then I hit mile 9.  Everyone who ran this race had something to say about mile 9.  We ran down this hill very early in the race, so it shouldn’t have been a surprise, but it was.  It was a steep hill stuck right in mile 9 and it was TOUGH.  In retrospect, taking a walk break might have been a good idea, instead of pushing up that thing, trying to maintain my pace.  I got to the top completely out of breath and my legs felt like jello.  Luckily, it was flat and even had a bit of a decline after that (for a little while).  Unfortunately, I couldn’t quite get back into that wonderful rhythm I had going.

The last few miles were tough.  The course passes right by the finish line and goes out and back for another three miles. Those miles had their share of hills as well.  I could see people pushing toward the finish line.  Then I would see someone running a bit less intensely and realized that their bib was a different color and they were running the full.  I would never want to run this full marathon.  Not only do you run the final stretch of the half with halfers sprinting by you, but you run right past the finish and start the loop all over again.  The full is simply the half twice.  Yikes.  No thank you.

While this little out-and-back section was annoying, I enjoyed being able to see my friends.  I saw Jeff, then Kim, several minutes ahead of me.  Rod, then Kelly, were several minutes behind me. Everyone looked like they were struggling a bit. But everyone was running a strong race.

When I finally got close enough to kick, I realized I still had a little left in the tank.  I finished strong with a fast kick.  I almost missed the finish line.  The final straightaway suddenly dog-legs left a few yards to the finish while the full marathoners keep to the right. Spectators and race officials were good about guiding those of us not paying attention into the finish chute.

I finished in 1:52:43.  Not bad for a hilly race!  I am pretty happy that I can run a strong half marathon without really training for it.  My “sweet spot”** seems to be getting lower and lower.  For a while it hovered around 1:55 and now it seems to be getting closer and closer to 1:50.  That is a good place to be!

The only real negative to the race was the shuttle buses back to the parking areas.  Due to the layout of the course and the lack of parking and open lanes, we had to park several miles from the start/finish area.  They had shuttle buses to take us to and from the parking areas.  Before the race, it was no problem.  We didn’t wait in line and got right on a bus.  After the race, however, was a problem.  The line for the shuttles was about an hour long. It was still drizzly, which was perfect for the race, but not so much afterward.  We didn’t have jackets because there wasn’t a drop bag system (at least not one we were told of or saw).  I used the t-shirt (which they gave us after we finished) to try to stay as warm as possible.  The whole situation really put a damper on the entire experience.  If they keep the same course, they will have to find a different solution for the parking and shuttling.  It was a really mess.

Despite the long wait, it was a good day and a good race.  I have come to realize that I really enjoy hilly courses.  It breaks things up and gives a nice challenge to a race.

*Here is a racing ethics question: is it ok to run a race with someone else’s bib?  My thoughts were that the race received its money and I was not running as a “bandit.” I am a middle-of-the-pack runner, so it wasn’t like I was going to get prize money or anything. Unfortunately, this time, it bit me in the butt a little.  I won the age group for my friends’ daughter.  oops. Luckily, this race doesn’t give anything for AG awards.  It just so happened that it was a small group.  Other age groups had the top times in the 1:20’s, 1:30’s and 1:40’s.  Who would have guessed that a time in the 1:50’s would win.  The other times in that age group were well over two hours.  In my own age group, I would have placed eighth.  What do you think?  Is it ok to run for someone else when they can’t run the race themselves??

**My “sweet spot” is that range of time where I finish half marathons.  I usually finish a minute or two above or below it.
Posted by Lisa at 11:47 AM

I think it's probably not really okay to run with someone else's number...many races (e.g. Portland) make it very clear it's not allowed. On a personal level, I would not like to have my name associated with a race finish and time that's not my own, whether it is faster or slower than I would have run. HOWEVER, I also think it's rotten that races don't allow bibs to be transferred when the registrant can't run. It's just greedy, they got their money in the entry fee...maybe charge a small extra fee to transfer a number, and everyone can be happy. Congratulations on a good race and what sounds like a great race yesterday!

Congratulations on a good race despite feeling so 'naked'!

Wearing an otherwise unused bib is OK in my book. The spot was still paid for by someone. They may have questioned you if you had to walk up and claim your award though ;)