I ran two races on Saturday. This is a local race that supports the Villa Park library and I love to support the local running community. I signed up for both the 5K and 10K, knowing I needed to get mileage in.

My first race was the 5K.  It is official: I HATE 5K’s!!  They hurt.  They are hard. I don’t know about you, but I think I underestimate 5Ks because they are a measly three miles.  Heck…running three miles is a piece of cake, right?  It is just a warm up.  Well, that is the problem.  It takes me three miles to get into a groove, so by the time I am feeling comfortable, the race is over.  Plus, it is so short that I feel like I have to run all out the entire time.  I feel like if I am not at puke threshold,  I am not going hard enough.

My original plan was to run to the race like I did last year. The race is four miles from my house, so I could add eight miles to the race distance.  I registered for both the 5K and 10K, so my total mileage would be around seventeen miles.  Perfect.  Unfortunately, life got to me last week.  Due to my running schedule and teaching Body Back classes, I get up very early each day. I am horrible about going to bed early. By Friday night after a particularly brutal week of emotional highs and lows, I was DONE.  I was so tired that setting my alarm made me cry. I couldn’t bring myself to get up early enough to run to the race.  I did need to be there somewhat early to help out with a booth where I was displaying brochures for my Body Back classes and coaching, but I left the house after 6 a.m. instead of 5 a.m..

As we were waiting for the 5K to start, I told my friends that I didn’t want to “race” it. I would treat it like a tempo run. I was too tired to think about my twenty-four minute goal that I have for a 5K.* Once we started, however, all that was tossed out the window when I saw my friends start to run ahead of me. I am too competitive not to keep them close.  As I realized I was running in the sevens, that twenty-four minutes was in play again.  It was on and I was suddenly running at puke threshold.

Kelly and I were running close to each other. At the half-way point, I was slightly ahead of her. As the race turned back toward the finish with a nice gradual downhill, Kelly passed me.  I couldn’t catch her. With pride, and even a bit of jealousy (I can admit it), I realized that Kelly is officially faster than me. Or we were at least pretty darn evenly matched. It totally makes sense.  It was two years into my running when my speed caught up with my training.  Kelly is there and seeing the fruits of her labor. She trains hard and, whether she admits it or not, she is competitive enough to push herself enough to break through those speed barriers. We ran into the finish line hard.  She finished in 23:23 and I was right behind her with 23:34!!! My twenty-four minute demon is behind me!  Not bad for being so tired, I almost skipped the race entirely.

We had time to get some water, eat a Gu and stretch a little bit.  Then it was time for the 10K. I wasn’t looking forward to it. I had not eaten a meal the day before—just a bar here or there and maybe even a pop-tart *blush*.  I was worried that I wouldn’t have any energy. Even still, my sub-fifty minute goal was in the back of my mind.

I was hoping to keep my splits under 8:00, but my legs wouldn’t cooperate.  I settled into a nice groove though on the gradual incline of the first loop. My competitive juices started flowing. I decided that Kelly could beat me on the 5K, but that I would beat her on this race. I knew that she could smoke me on the downhill, so I had to put some distance between us on the uphill**. I was right.  By the end of the third mile (which is mostly downhill), she had nearly caught up with me—I could hear her breathing down my neck.  LOL. This was a double loop race and I pushed up that incline again during the fourth mile, putting more and more distance between us. By the time I hit the fourth mile, my legs were feeling very fatigued.  Miles four and five were my slowest of the race. When I had one mile to go, I knew I had to finish strong. I had no idea how far back Kelly (or the rest of the group) was, but I knew that she was really fast on downhills, so I kept pushing. I gave it all I had at the finish.  My sixth mile was 7:42 and the last .3*** was at a 7:10 pace!

We found out after the race that Kelly had come in FIRST in her age group in the 5K and I had come in SECOND in mine!!  Woo hoo!!  We found out a bit later that I placed FIRST in my 10K and Kelly placed THIRD!!!  Double Woo hoo! 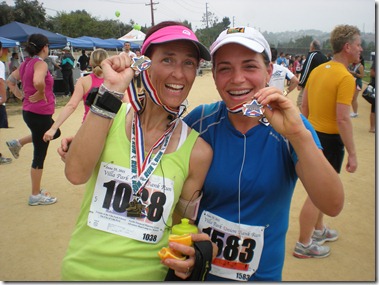 Kelly and I showing off our “bling”.  The race gave AG medals as well as finishers’ medals

My friend and Body Back client Nicole found out she placed FIFTH**** in her age group!!  This was her first 5K and she was thrilled. 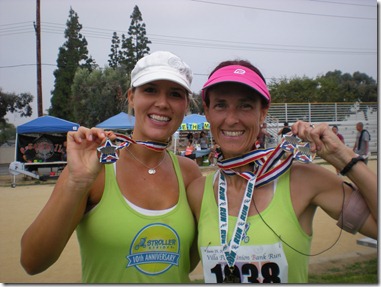 Nicole shows off her AG medal! 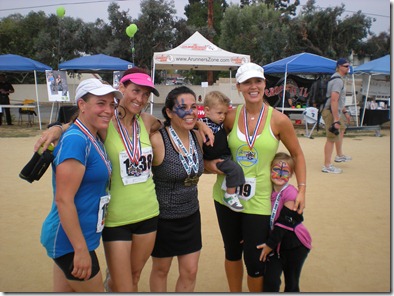 The Body Back gals after the race!

This was a nice little race.  The race director is a local runner who wanted to put on a race that was very “runner friendly.”  He definitely succeeded.  In addition to that, it was family friendly.  They had booths for kids, such as face painting and caricature artists. The weather stayed nice and overcast (but it was a bit humid) and it was a good time. 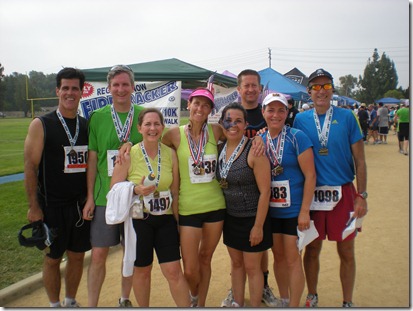 *I do 5Ks so infrequently that my PR goals are much more conservative than for longer distances.

***I had to do some weaving at the start of the race.

****This race gives medals to the top five in each age group.  How great is that??

How fabulous! It sounds like a really great day ... with lots of pretty 'necklaces' :)

Congrats on your PR and AG awards!! I really think that we run better when we take the pressure of ourselves :) Congrats to all your friends on their races too!