On July 4 I ran a 15K in Coronado (San Diego).  We were staying the weekend with our friends Jason and Tracy.  Tracy was running the 15K and I thought it would be fun to run it as well.  And as you know… I just can’t seem to say no to a race right now*

The race started at 7, so we thought we would get there around 6 in order to find a decent parking spot and have time before the race.  I ran this race two years ago and was able to park super close to the race area.  I must have arrived much earlier that year because when Tracy and I got there, parking was an issue.  We finally found a spot in the neighborhoods of Coronado, which was probably 3/4 mile from the park. 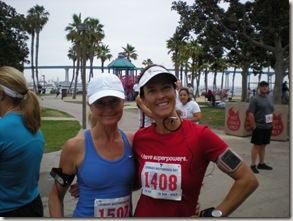 We picked up our race packet and were pleased to see that they had tech shirts and chips this year.  No more white cotton t-shirts and elbows at the starting line!  We made it back to the car to put our stuff in it and back to the park with plenty of time to spare.

I had run a 10k the day before and it hurt**.  I have come to the conclusion that 10ks are HARD.  I was really looking forward to this race.  I have decided that I enjoy the longer races where you can get into a groove and really feel the pace.  The shorter races seem like you have to push it the entire time.  In a 5K, if you aren’t at the puke threshold the entire time, you aren’t going to have a good time.  No thank you.

We lined up near the start.  Tracy seemed excited too.  She had run this race the previous year and really wanted to PR.  She had recently upped her mileage and was feeling good about her running.  I knew that she would run a strong race.

As they played the National Anthem, I was struck by the silence.  The song was a recording (Carrie Underwood from the Superbowl—a popular choice at these races), so it wasn’t out of respect for the singer.  All the runners, amped up for a race, were silent out of respect for our country and the flag on Independence Day.  It was amazing.  Toward the end of the song, I started hearing the familiar chatting that you often hear before a race.  But for a few moments, we heard only the song and saw the flag billowing in the slight breeze.  It was pretty cool.

I wasn’t too sure what my goal was.  It had been a whirlwind weekend with races Saturday morning then packing up to head to San Diego for an afternoon with friends.  I didn’t get a chance to research what my goal would be.  In my head, my 15K PR was 1:24.  But somewhere in the back of my mind, I kept thinking about 1:21.  It turns out that I ran the Coronado 15k back in 2008 in 1:24, but ran the Resolution Run 15k in January 2009 in 1:21.  How does someone forget their PR?  Since the 15K is never a key race for me, I have never really focused on hitting a certain time.  I decided as I was waiting for the race to start, to try to finish under 1:20.  I did some quick math and calculated that an 8:30 pace should do it.  Ironically, that is slower than my half marathon pace for a shorter race.  However, I had run hard the previous day and hadn’t had much sleep in the days prior, so I didn’t want to push too hard.

Then we were off.  The race starts on the field and merges onto a narrow bike path.  I had run this race in 2008 and knew that the first part was a bit slow, but that it opened up after getting off the bike path.  Even with the bottleneck and weaving through other runners, my first mile was 8:34.  Not bad.
There isn’t really anything special about the course.  While Coronado is a beautiful place, much of the course is not.  We run by the bay briefly and then along the golf course.  It heads down the strand, only to turn into the Navy Amphibious Base where we run through a maze of concrete.  It isn’t very scenic, but I was able to hear Reveille as the colors were raised at 8 a.m.  That was kind of cool on Independence Day.  The other significant feature of the course is that it is FLAT.  Many races tout a “pancake flat” course as a good thing.  Honestly, by the fifth mile, I was yearning for a hill, just a little hill.  Rolling hills are much more enjoyable for me than a flat course.  I LOVE running downhill and the only way to get it is to run up a few.  Flat=boring.

The course was an out-and-back.  I know a lot of runners who hate out-and-backs, but I am starting to really like them, especially when I know other runners in the field.  Before the turnaround, I saw the frontrunners.  I love cheering for them.  The first woman was WAY back, however.  I think she came in around 29th.  The group of runners around me started telling the next three or four women where they were (“you’re the third woman!!  way to go!).  I saw a fast guy running with the early pack.  He was dressed just like me!  Another member of Team Jamba!!!  He was looking really good, like he had superpowers like his shirt said.  We waved at each other and cheered.  I was bummed that I didn’t find him after the race to introduce myself.  We are on the same team, afterall.  After the turnaround, I saw my friend Tracy not too far behind me.  She looked strong and had a smile on her face.  She was having a good race.  I also saw another member of Team Jamba.  We had briefly spoken before the race, but, sadly, I forgot her name.

Even though I wasn’t pushing myself particularly hard (relative to other races I have run), by the turnaround, I was feeling pretty tired.  I have been pretty successful at my pacing lately.  I have been able to start races out at the right pace in order to speed up at the end with negative splits.  I knew by the half-way point that negative splits weren’t going to happen***.  I just wanted to maintain my pace and keep it so I could finish well under 1:20.  I had a brief chat with a couple of runners around mile 8 where we determined that we were on target for sub-1:20. 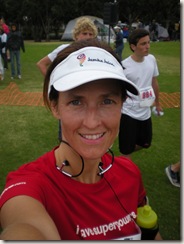 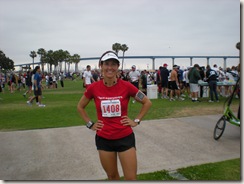 Tracy came in a few minutes after me and PR’d by seven minutes!  She looked very strong coming in.  She ran the race in 1:26 and kept even splits throughout.  I’m so proud of her!!  She’s another mom who has started running late in life.  Go us! 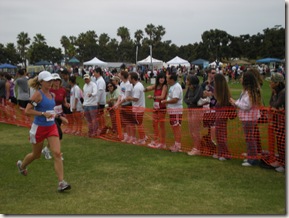 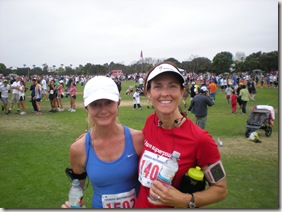 It was a nice race with nearly perfect weather.  We both felt really good afterward.  We went back to the car, back to her house and then to a friend’s pool party a few hours later.  We sat and ate barbecue food throughout the afternoon, knowing we had run over nine miles before the day really began for everyone else.  A great way to spend the 4th of July!

That's awesome! Congrats on a new PR. My 1st race ever was a 4-miler on the Coronado Navy base...so boring! I'm intrigued though--maybe I'll try this race next year. I'm doing the Silver Strand 1/2 in November...hoping to PR in it!

Congratulations on running a great race - and back-to-back with your 10k, too!

I love that you ran into another Team Jamba member!

Great result - a new PR! Especially after running a 10k the day before.

Check you out and your PRs! Pretty cool.

I ran one 15K and I had a problem figuring out what would be a good time and also how to pace myself. I finished in 1:21:48 but I had too much left at the end. I should have been pushing myself harder early on. I guess it's just something I learned that I could only have learned running that race distance.

But I enjoyed the distance and finishing in that time gave me hope that I could get my sub-2 hour half marathon, which I did a few months later :)

Nice set of splits! It was a good day to be running, that's for sure!

The 15k distance took a little time for me to get used to, but I've found that after the mile 6 that I actually have a little more umph to give for the end of the race.

I still can't believe we missed each other. I probably saw you run in for the finish, too, and didn't realize it.

Great race! I lost this one in my Google reader and had to go back to your website to find it. :) I love 15K's! But I can never remember my PR either. In fact, I have to do a lot of mental calculation to even get an idea of what a good time might be! :)

It is pretty sad that you have a issue with you parking spot. It looks like those races you should be pretty early to be set a ready without any delay.