Top of the World

I love the part of marathon training when you start to do those really long runs.  Those long runs that very few people ever do.  I always feel a sense of accomplishment when I run over fifteen miles.  It is something that I never ever thought I could do.  A half marathon was something I could envision, something I could imagine myself doing.  But I never thought of myself as a marathoner—until I actually was one.  Sometimes I still can’t believe that I can run that far on a regular basis.

Last week, Rod told Kelly and I that we were in charge of the long run on Saturday*.  I loved finding new long runs in San Diego, but I am still somewhat unfamiliar with Orange County.  But I took on the challenge.  I wanted something coastal in case it was hot.  I did some searching online and found some possibilities.  I decided to run in the Aliso and Wood Canyons Wilderness Park to the “top of the world.”  It was an out-an-back with options for shorter loops—perfect for a group with different mileage goals.

It was the right choice.  The weather was perfect.  It was actually a bit chilly when we started around 5:45.  The marine layer was in and looked like it would stick around for a while.  I met up with Rod, Lori, Kelly and Heidi.  Heidi and Lori ran at a slower pace and ran eleven miles while Rod, Kelly and I did over seventeen.

The trail starts out as a blacktop road (or you can run alongside the road on a trail).  We noticed that it headed downhill a bit and even commented on it.  The significance of the early decent did not hit us until several hours later.

Where the main trail branches off, about 1.5 miles from the parking lot, there was a porta potty.  We stopped for a bit and then headed off into the canyon.  Here, the trail was dirt.  It was a nice, wide and as we would later discover, heavily traveled trail.  It is well marked with trail signs and mile markers.  It started to gradually climb.  We passed an old sheep corral, some caves and crossed a couple of streams.  It was a lovely trail that I really enjoyed.

A few miles in, the trail turned up to the left.  And when I say up, I mean UP.  This is called Cholla Trail and is very popular with mountain bikers (as we would later discover).  Cholla Trail was a very steep single track.  We walked a good bit of the steepest parts.  Rod is like a mountain goat and ran most of the trail.  Kelly’s and my shorter legs couldn’t scramble up the slope quite as well.  I tried to run as much as I could, but I also knew that we had a long way to go; we had only run about five miles.
At the top of Cholla, we hit the West Ridge Trail.  It went along the ridge line in rolling hills.  It was still overcast in the low 60’s—is it really July??  While the weather was perfect for running, I was a little disappointed that I never got a glimpse of the ocean, although I knew it was there.  It’s ok.  The ocean will always be there, but great runs won’t be.  I’ll take that great run over the view of the ocean any day.

When we hit the park at the “top of the world,” we had only run a little over seven miles (although mapmyrun.com told me it would be closer to eight).  We ran into the hills of Laguna Beach for a bit to get additional miles.  I knew that I wanted to get the extra mileage in the middle instead of trying to pull it out in the end.

The weather was still overcast and even a little foggy.  We stopped at the high point of the trail and took some pictures. 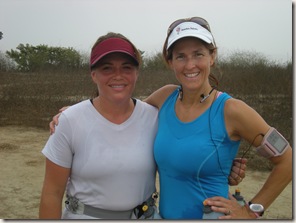 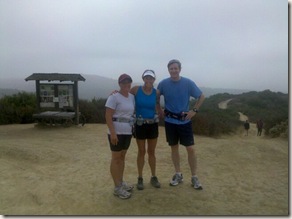 We started our descent.  For some reason my brain was convinced that it was downhill all the way.  Oh, how we forget those sporadic downhills on an uphill climb.  Well, I certainly noticed them on the way back.  That rolling ridgeline had quite a few steep hills.

Then we hit that steep Cholla trail.  We knew we only had a little over five miles left and our spirits were high.  I was actually feeling great.  By this time, the trail was full of people.  On the way up, we only saw a couple of people.  On the way down, we saw dozens.  The trail was obviously very popular with mountain bikers.  I knew that from my online research, but am not sure I expected so many bikers.  Luckily, they were all coming up while we were running down.  If it were the other way, there might have been some danger on the single track trail.  We would see the bikers with plenty of time and move to one side or the other, giving them room.  I know from experience how tough it is on a mountain bike if you have to stop on a steep uphill, so I wanted to give them space.

That downhill section was the highlight of my day.  I felt like I was flying.  I let gravity carry me and picked a line and went for it.  I even said, “Weeeeeeeee.”  Rod took it a little more conservatively to save his knees, but Kelly and I went for it with abandon.   It was so much fun!! 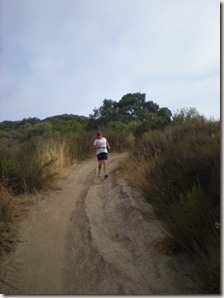 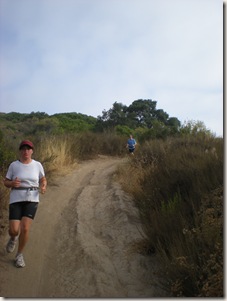 The next few miles were a blur.  There were a ton of people on the trail.  This reassured me that if we were ever to run this trail and get split up, it would be a safe trail.  There were more mountain bikers, a few hikers and several running groups.  I think there was a high school team as well.   As we approached the end of the dirt trail, Kelly started falling behind.  She urged us to go ahead so she could take a few walk breaks without feeling guilty.  Rod and I obliged and ran ahead a bit.  Sometimes Rod would run ahead of me.  We were all running our own pace during this part of the run (probably around mile 15).  It was at this point that the sun started coming out. 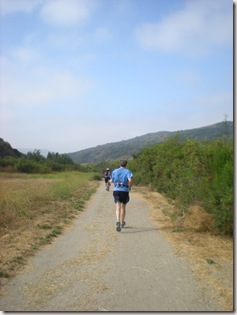 We backtracked a bit to check on Kelly.  She was doing well and told us to run ahead.  She told us that she would continue to run, but for us to run to the car and come back and get her at the parking lot (we had parked a bit further down the road at a strip mall).  This was the last mile and a half or so and that easy downhill that we didn’t give much thought to early that morning seemed endless.  It was a slight uphill on a blacktop road and the sun was out fully.

It was a tough run, but one of my favorites.  It was a beautiful trail, which is a nice change from pavement.  Almost all of my long runs during my previous marathon training has been on roads, sidewalks and bike paths.  Changing it up and running the long ones on the trails is going to help me avoid long run burnout.  I am looking forward to the next one!! 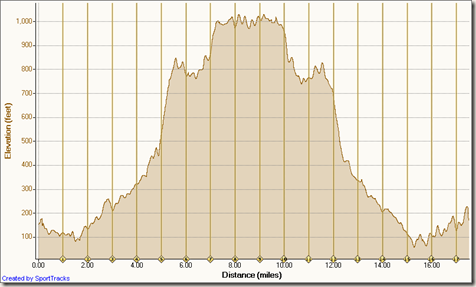 Elevation profile for Saturday’s run.
* It has been such a crazy week that it has taken me almost an entire week to write about Saturday’s run!  Bad blogger!!
**We figured that Kelly ran right about seventeen miles.  That is AWESOME!!
Posted by Lisa at 1:22 PM

What a fun run! The elevation looks deadly, but that makes your accomplishment that much better.

You make trail running sound like so much fun - I really should go out and try it.

That's some serious elevation, good job on that run. And I know what you mean about doing long distances constantly. When I'm doing over 13 miles I start counting them as a half marathon + X miles, it's surreal.

Nice run on a nice trail! If you think that Cholla is popular with the bikes, stay off of RockIt and Mathis on a weekend day!

Congratulations on an awesome trail run. I can't wait for the day when I can run downhill with such confidence!