A carcass, a long run and a small world…

I had a long run planned for Saturday.  It was the first really long run in a while.  Ironically, even though I have been putting in a lot of miles lately, I haven’t run anything longer than thirteen miles in months.  In fact, since my last half marathon on June 5, the longest run I have done is ten miles.  So sixteen miles was a big jump for me. I was actually a little nervous.

I had a very fitful night’s sleep.  I was alone in the house as my husband was out of town and my kids were spending the night with their cousin, so I could run early.  I can’t remember the last time, if ever, I was alone in the house at night.  Around 1:30 a.m. the cat started meowing loudly.  I woke up to check on her.  This meow sounded like her hunting triumph and I expected to see her with her prey.  She was just looking at me….no prey in her claws.  I checked her bowl and it was empty, so I assumed that she was just hungry.  Feeling guilty for letting it run out, I opened up a special can for her and went back to bed.

A few hours later, I woke up without my alarm (which I had set incorrectly) about 20 minutes later than I would have liked.  As I walked into the living room, I saw what I should have seen earlier—a dead RAT. 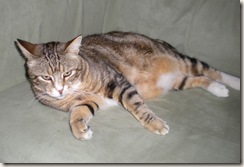 Arrrrgggghhhhh.  Damn cat!  What is worse is that she brought that thing through the dog/cat door IN.MY.ROOM.  Ack.  The worst thing is that when I didn’t see it in the middle of the night, I rewarded her with some canned food!!!   She thinks she brought me a prize.  One thing you have to know about me is I. HATE. DEAD. CRITTERS.  I can deal with poop, puke etc.  I can unclog a stopped up toilet and clean up after a sick kid.  I cannot deal with the carcass of a dead rodent.  It gives me chills just writing this.  So here I am, alone in the house with my husband five hours away.  I HAD to deal with this before leaving for my run.  If I left it a) the cat would eat it (shudder) or b) it would start to smell.  I grabbed the pooper scooper from the back yard and psyched myself up enough to roll the thing onto the poop shovel and heave it over the back wall into the common area where a vulture or something would take care of it (or the HOA gardeners…LOL).  That threw my pre-run routine out the window.  I didn’t get to eat my English muffin with peanut butter.  I think that affected me later.

We finally made it down to the Huntington Beach pier around 6:20 (Kelly had issues in the morning, as well).  I was really tired and not feeling great, but I was looking forward to the run along the ocean.  As we started out, I felt great.  It was an absolutely gorgeous morning.  We ran south along the beach toward Newport.  We were running around a 9:30 pace for quite a ways.  After a while (around six or seven miles, I think) I noticed that Kelly was having a harder time talking.  I knew that keeping up that pace would wear her out sooner than she wanted.   I was getting a bit tired, so I decided to slow a bit.  We let the guys go on ahead while we slowed down. 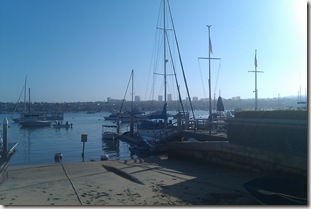 We turned around at eight miles, which meant going into the neighborhoods of Newport/Balboa after the boardwalk had ended.  Kelly wanted to make sure we went that far instead of trying to make up the rest at the end after the pier.  She knew that once we got back to the pier, she would be done.  It turns out, running out to eight miles out is the only way I would have run sixteen as well.  I would have stopped well short of that point had I reached the pier before sixteen miles. 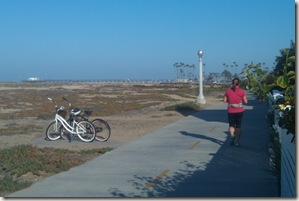 I keep samples etc. for the run that morning.  I ate an Accel Gel around 5 miles, which did not taste particularly good.  It is way too sweet and I had to gag it down.  Around ten miles, I needed something else.  I had a pack of Clif Shot Bloks that I had received in a race bag.  It was pina colada flavored.  According to Kelly, it was the color of urine.  Mmmm….appetizing.  And it tasted like sunscreen!  I choked down two or three bloks and couldn’t eat any more.  YUCK!


Around mile 14, I was starting to drag and really just wanted to be done.  Kelly was feeling the same way.  She kept falling behind a little bit more.  I would slow down or stop and wait.  Finally, when we got on the path along PCH, she told me to go ahead.  She was fine, but she wanted to take it easy and she wanted me to finish strong.  I admit, I was wanting to push my pace a little to see if my legs could pick it up while feeling so tired.  The bike path was teeming with beach goers by this point, so it wasn’t like I was leaving her alone.  I decided to go ahead and run the last two miles at or near my marathon goal pace.  I was able to run under 9:00 miles and finished with the last part being closer to 8:30.  I am glad that I can push it even when I am under-fueled and over-tired.

Kelly came in a little bit later and we all went to Jamba Juice for post-run smoothies.  I added a protein boost to help me recover.  The rest of the group stayed at the beach for a bit, but I needed to get back to my kids.  My brother only has one child, so I know that three is a big change in their house and I didn’t want to take advantage. 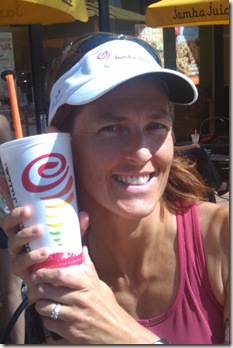 Later that afternoon, I realized that, while I finished the run strong, it may have been my limit for that day.  I was worthless for the rest of the day.  I couldn’t get anything done.  I was exhausted.  My kids watched movies and vegged with me (I didn’t earn the Mother of the Year award that day). I laid down and took a nap.  I did manage to cook some dinner for all of us and then went to bed early.  I tell my clients that if you feel wasted and tired several hours after a workout, you did too much.  Hmmm…. maybe I did too much?  Luckily, I felt back to normal Sunday and had a great recovery run on Monday.  No harm done.

Because of a ridiculous amount of traffic caused by opening day of the fair, we didn’t get down there until well past noon.  The beach was already pretty crowded.  We found an empty spot, right in front of a man and his kids.  After spreading the blanket and getting some food from the cooler, I did a double take after glancing at the man.  He looked exactly like one of my blog buddies, LB from Muddy Runner!

I’ve seen plenty of pictures of him and know him through his blog.  I was 90% sure it was him.  Once he put on his Mud Run t-shirt, I was convinced.  I said to him, “excuse me, do you have a blog called Muddy Runner?”  He looked at me incredulously.  I said, “I’m Lisa from Discovering the Meaning of Stonehenge.**  He said something like, “what are the odds??!!”  Seriously.  There were thousands of people down at the beach that day.  What ARE the odds? 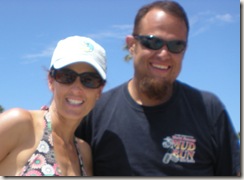 It was cool to see him and talk to him and put a voice with the blog.  I saw his little girls that he writes about, although they were playing in the ocean the entire time I was there.   We had waved to each other at Surf City, but have not crossed paths again, even though we live and run relatively close to one another (especially when I consider how far away some of my blog friends are).

Check out the pictures to get a picture of how crowded the beach was.  To put my blanket down right next to LB's is unbelievable.  I love fun coincidences! 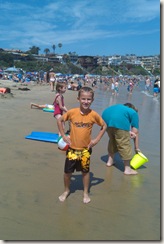 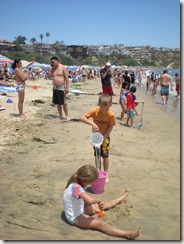 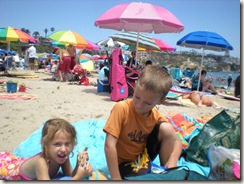 It was a fun and crowded day at the beach.
Happy Running....
*however, nothing will ever top my best small world story.  Read it here.
**I am really thinking about changing the name of this blog.  It is quite a mouthful.
Posted by Lisa at 3:02 PM

I'm just like you with the dead rodent thing. I can deal with pretty much anything else. Good job on your long run over the weekend!!

Oh noes!! you gave your cat food after she brought the rat? Hope she doesn't start to bring you more 'prizes' whenever she wants an extra meal.

I think I woulda found a neighborhood kid to deal with the rat.

I can never sleep when I'm alone in the house. You're right, it doesn't happen often, and I THINK I'm going to look forward to it, but then it happens and I can't sleep.

Awww. Kitty brought you a gift!

PS
One year, on Mother's Day, my animals brought me a dead mouse and a lizard... delivered to my side of the bed on the floor. I was one lucky mom! Heh.

Man. At least your cat remembers what s/he is supposed to do in the large scheme of life. Mine? She just has kittens and sits around and meows for food.