Thursday night I ran the first of three Peter’s Canyon Trail Runs.  I expected a very small event—similar to the OC Chili Winter Trail Series.  This was bigger.  There were at least four vendor tents and probably twice as many runners.  I was pleasantly surprised. 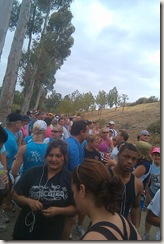 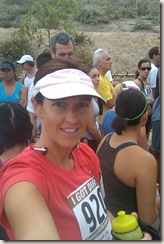 It was a low-key start, like these trail races often are.  It started at 6:15 and the temperature was just right.  I had put on a long sleeve tech shirt, but at the last minute changed into short sleeves.  I’m glad I did.  While the temperatures were comfortably in the low 60’s with a breeze, it was still very humid.
The first mile was a somewhat gradual ascent. During that first mile, I was wondering if the five miles I had run earlier in the day were making me sluggish.  I felt like I was struggling to get into a groove and to breathe.  I hadn’t run in the evening for a while and I wondered if I was so used to morning runs that I wouldn’t be able to push myself at night.

As we got into the canyon, we turned up on the ridge and headed up, up, up the hills.  It was a nice trail up to the ridge with plenty of room to pass.  I walked sooner than I would have liked, but I didn’t want to run out of steam too early.  For those of you who are familiar with this park, the route bypassed “Big Red.”  Although the other hills gave us plenty to get our heart rates up. 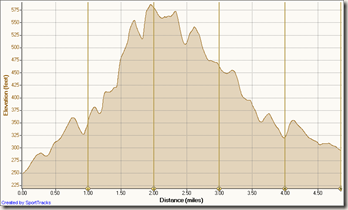 By the time I was done with the worst of the hills, I was feeling more in a groove.  I think a lot of it was due to the fact that I love running down steep, technical hills.  I am getting more and more confident of going fast going down those hills and I tend to pass quite a few people.

The last half of the race is pretty much all downhill.  I was able to get a good stride.  I ran the last two miles right around an 8:00 pace!  Not bad for the end of ten miles for the day!*

My time for the race was 44:25.  My Garmin showed that it was actually 4.8 miles, rather than five.  I ended up 116 out of 378 runners.  The results were not broken down by division or gender, but from what I can tell I was the 27th woman and the 3rd in my age group!

I wandered around a bit and checked things out.  Again, there was water in a can, courtesy of Monster.  Strange.  As I was getting a sample of Gleukos, I struck up a conversation with another runner.  She is a mom of two and lives near Peter’s Canyon.  We both are training for a fall marathon and have similar PR’s (although she ran this race a full four minutes faster than I did…SPEEDY).  We decided that we should go running together and exchanged contact information**.  When I got home, I was as excited at finding another running buddy as I was about my performance in the race.

This race was the first of three in a series.  The next one is in July and the third in August.  I am bummed that I will be out of town for the next one, but the August race is on my calendar.  It is a nice race with the challenge of the hills and the opportunity to run pretty fast.

*five miles in the morning and five miles during the race with eleven hours in between.
**She and I ran on Saturday AND Sunday this weekend and will be again tomorrow.  I believe it was the beginning of a real friendship.  That is better than any medal!
Posted by Lisa at 9:20 PM

I really admire anyone who'd attempt racing where there are hills or mountains involved. Being a hill-hater, I try to stick to races described as flat and fast. Well done on the race and your new running buddy.

I love hearing about all these races you're doing! There are so many races near you, that's awesome! And your performance just continues to impress me.

I'm glad you've found a new running buddy, those are always nice to have!

I might try to come out and run the next race-I was deep in "summer school and residency crap" on thursday and all I wanted to do was go home and sit on my couch!

Congrats on winning the free entry into the Eco marathon

Nice Lisa! I see from the trail map that you didn't just run the bottom of the canyon out and back. That can get pretty boring.

I may join you as the summer progresses. I was actually thinking about this race while I was slogging through El Moro/Laguna Canyon last Thursday night....

Woah! Those are some hills! Nice job!

That is an awesome time for a 5 mile trail run, and especially since you ran another 5 miles earlier that day, wow!

Glad you made a new friend too, that's always a good thing.

Wow, those elevation chart of yours - they look so scary!

I think that it is great that it turns to be bigger that you expected. Those kind of things are nice to see sometimes.