In April I met John and Julie at the Crystal Cove Trail race, where I was a volunteer.  They talked to me about the 5K John was organizing and John e-mailed me the details of the race that benefits the Villa Park library.  Villa Park is just over the hill from me, so I thought it would be a great race to do.  I mapped it and discovered that the race start was only four miles from my house.  I needed to get a decent run in, so what is the point of driving?

I woke up bright and early and put on my Jamba Juice gear.  I hadn’t registered for the race and wanted to get there about 6:45 (registration opened at 6:30 and the race started at 7:45).  The four mile run there was not going to be a quick one.  There is a very big hill between here and Villa Park.  Large trucks aren’t even allowed on the road there due to the steep grade.  I got out of the house a little later than I wanted.  I took a bit of a short cut in the interest of time, which took off about .15 miles.
It actually took less than 40 minutes to get there.  My leg, which had been bothering me during the week, felt fine.  I took it easy going up the steep hill and then got into a good rhythm on the flatter section approaching Villa Park High School where the race was starting. 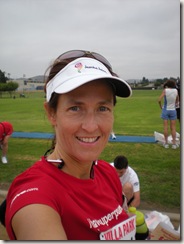 Before the race
The race was smallish—500 runners.  It was well organized and the volunteers were some of the best I have encountered.  The race director, John, is a local runner.  It was obvious that this was a race planned by runners.  First, they gave tech shirts instead of cotton t-shirts.  You don’t usually see tech shirts at a local race for $25.  The race was chip timed, which is always nice.  Third, they promised finishers’ medals to the first 200 runners.*  Lastly, they awarded the first five in each age group special medals. 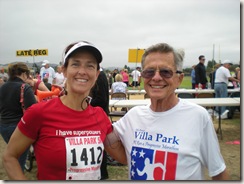 Me with the Race Director, John
This was my first event representing Team Jamba.  To be quite honest, I was a little nervous about it and not really sure what I was going to do.  Luckily, everyone loves Jamba Juice, so it is an easy sell.  As I was registering and chatting with a couple volunteers, one of them asked about my Jamba Juice apparel.  I started chatting about Jamba Juice and gave them all a coupon.  I gave most of the registration volunteers coupons and they were all really appreciative.  There is a Jamba Juice pretty close to Villa Park, so I bet some of them were heading there after the race. 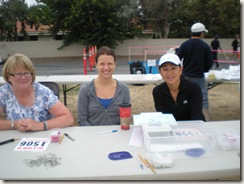 Friendly Volunteers
They gathered everybody at the start.  John made a few announcements, but unfortunately, the PA system was not working well.  After a bit, they just abandoned the sound system and without any warning, the starting horn went off.

I started pretty fast.  I looked down at my Garmin and saw that I was running in the low 7’s.  I think that someday, this might be my 5K pace, but for now, with no speed training, that pace is a bit fast for me (especially when I had to run home later, over the hill).  The course headed up an ever-so-gradual hill and my pace evened out to just under 8 minutes for the first mile.  I kept it pretty steady for the second mile (8:00) and then pushed it a bit in the last mile (7:29).  I finished in 24:19, which is a PR of almost a minute!! 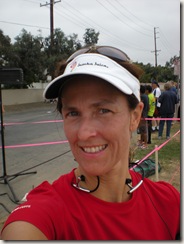 After the race
I have decided, however, that I am not particularly fond of 5K’s.  I think to do really well, you need to be at the puke threshold for the entire race.  I felt like I was pushing, but felt like I should have pushed harder.  I like the concept of pacing myself and you really don’t do that in a 5K.  In a half marathon, you can stop and tie your shoe and it doesn’t ruin your entire race.  There is more room for error and, therefore, is less stressful.  I did enjoy this race, however.  I was in a good place mentally for this race.  I didn’t put too much pressure on myself and just wanted to run strong.

Because of the chip timing, the results were posted minutes after I finished.  I was thrilled to discover that I was 5th in my age group!  Ironically, if I was four years younger, I would have been second by only two seconds!!!  If I were ten years younger, I would have placed third.  It looks like the women are getting faster as they get older—I’m in a tough age group! 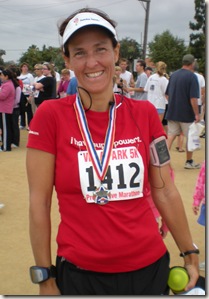 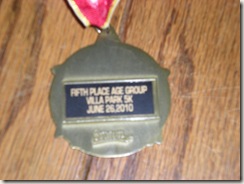 After collecting my medal (there was no ceremony, just volunteers checking a list and handing out medals), I put on my race shirt over the one I was wearing and stashed any good stuff from the goodie bag, so I didn’t have to carry more than my water bottle.  My run home was slower than the run there.  My knee/ITB was bothering me a bit (where I didn’t feel it at all during the race).  I took it nice and easy on the way home.

I’m getting to the point in my training that I should be doing closer to 15-16 miles.  While I am not getting quite the amount of mileage in on my long runs, I am hoping that I am making up for it with some intensity.   Will I be ready for a 50K in 7 weeks?  We’ll see.  I am hoping to enjoy myself along the way.

*while they advertised the finishers’ medals, there was some sort of mix up and the medals never arrived.  I overheard that the medals would be at the Villa Park city hall.  Unfortunately, they never made an announcement (the PA system had issues and cut out during the pre-race festivities, including the National Anthem) so there were some disappointed runners.
Posted by Lisa at 10:08 PM

I sort of feel the same as you about 5Ks, I know I will never be super-fast (under 23 minutes is about my highest aspiration). HOWEVER, I have been doing a few 5Ks lately, as an antidote to the slow running rut that marathon training creates. Hoping that they will act as speedwork to help with my half marathon goals this summer.

We went to that restaurant you recommended on the Oregon coast (at the moment I can't remember either the name or the town, I feel senile) and really enjoyed it! They no longer have the crab and cheddar sandwich though. :( Thanks for the tip!

I'd say the phrase 'puke threshold' is pretty accurate for a 5K. That's how I am hoping to feel this fall anyway when I run some more, when it's not so humid. Funny how you love the longer races, and i like the shorter ones, maybe because for me the "pain" is over quicker then! And that's an awesome PR! That's the range I want to aim for this year - to have that elusive "24" in the beginning of my time.

Of course, I've never run TO the race to get my fastest times!

So wish there was a jamba juice around here, i've heard nothing but good stuff about them.

Congratulations on placing - even if it wasn't as high as you'd hoped for.

I was looking for other members of Team Jamba Juice and stumbled upon your blog.