*Mile 1-- What an incredible rush! Laura didn't waste any time pulling ahead of us. Good for her. She finished 22 minutes ahead of me and actually could have done better than that, but started feeling ill in the later miles.

There were so many people. For much of the time, I was just keeping an eye out for a little pod of space and I would dart to it like a rabbit. It didn't keep me in a very straight line, but I didn't feel like I was going to step on heels (or be stepped on). As I bumped into people or vice verse. Everyone seemed very friendly and it was an upbeat atmosphere. The one bad thing about so many people is that I never really fell into a good running rhythm. My stride was a bit short and I didn't feel like I was really relaxed. Although, we were relaxed enough to chat every now and then...

One of the oddest things in those first few miles was the heat. The weather was still cool. But as we ran, we would run through pockets of warm air, almost as if we were running by a heater vent. We figured that it was the masses of people. While it was sunny at the end of the race and started feeling pretty hot, the warmth in those first two miles seemed more noticeable. I don't sweat that much and I was already sweating by the time we turned onto Park Blvd. Once we got closer to the water, near Petco Park, we could feel a nice breeze.

We ran past our first fans during the first couple of miles. Christina, from Stroller Strides was there as well as one of Lisa's friends. Seeing familiar faces is REALLY cool.

*Miles 2-4, Park Blvd.-- I actually had a lot of fun on Park. I was feeling pretty good. There were still a LOT of people all around and you really had to watch where you were going. Lisa was right next to me and suddenly, she FELL DOWN! Oh no! My heart stopped for her. I thought that her marathon journey might end because of tripping on a silly pile of hardened asphalt. I think I actually screamed a little. There were people all around us helping her to stand up. She had skinned both her knees, but she said she was fine and we trudged on. After that we all pointed out various hazards along the way- trolley tracks, lone water cups etc.

At one point along the way, one of the bands asked us if we feel good. A cheer rose up from the runners. They started playing "I feel good."
It was fun!

We were joking around with people and making friends. At one point, a very tall black guy with dreadlocks was manuevering through a group of people and almost ran into me. I said to this tower of a guy in a good-natured tone, "hey, big guy...you know it would hurt if you stepped on someone..." He laughed and said that he needs to watch it because there might be retribution at mile 24 when he wouldn't be able to defend himself. I ran into him after the finish near the medals and we shook hands and congratulated each other on our runs. I like running in the middle of the pack. I doubt if people running 6- or 7-minute miles get to have as much fun as we do. :-)

*10 K-- I was feeling ok; not fantastic, but not bad either. I looked at our time (1:07) and did the math wrong and thought we were on track for our finish time of 4:30. By 7 miles, I figured out that we were averaging 11-minute miles. By the time we got on the 163, I knew that the goal time was out the window. There was no sense dwelling on it, though... it was time to just focus on the main goal-- FINISHING.

*Miles 7.8-11.5, The 163 Freeway-- I was really looking forward to this part. They CLOSE THE FREEWAY for us to run on. For some reason, that just seems like the coolest thing. A good portion of the freeway runs uphill, so this was a pretty tough part of the race. That hill was a death knoll for Jen. She was struggling up the hill. She would be behind us for a while, catch up and then fall back again. She made a comment about it kicking her butt. She tells me now that she wasn't the same after that hill. It sapped her energy.

We ran into Tara again and she seemed to be having fun. I was having fun, too. A guy asked Lisa and I what a "Rockin' Mama" was. All four of us were wearing our great Rockin' Mama logo that Lisa designed. Jen, Lisa and I were also wearing our names (Laura was a little less anxious to have strangers know her name). We told him that we are a group of moms who came together to train. We met through our moms group. He thought that it was great and he congratulated us for getting out and doing this. I felt pretty proud.

*Miles 12-13.75-- We ran by the Fashion Valley Mall. I didn't even think about stopping in at Nordstrom to go shopping. I was focused on my running. :-) We saw Laura's husband--well, Lisa saw him and I tried but he was behind people when I looked so I yelled a quick hello. Unfortunately, Laura never saw him (she was probably a half hour ahead of us). The huge bummer for Laura was that she didn't carry any Gu or other calories with her and was relying on him to give it to her when he saw her. By the time she hit the Powerbar Gel station at 17.6 miles, she was nauseous and couldn't eat any of it. She actually ran the entire race without a single gel. Holy cow. Imagine how well she would have done with calories! (she finished at 4:32, btw)

Once I passed the halfway point, I really started feeling it. I was ok with my half marathon split time (2:22) and thought to myself that I was looking forward to running a half marathon later this summer. I started getting pretty tired around 13.5 miles. Lisa told me that she wanted to stop and stretch at the next water stop and I was all for it. Jen was behind us and for the first time in the race, I couldn't see her.

When we got to the water stop (around 13.75 miles), we stretched and I called Jen. We were through the water stop and had been there a minute or two. She told me that she wasn't at the stop yet, but she could see it. At this point, my legs were starting to feel heavier and heavier. I was afraid that I wouldn't be able to get going again if I waited much longer. I think Lisa felt the same. We hoped that Jen would catch up with us, but we needed to start running again. I was also excited because I knew that my family was right around the corner.

*Mile 14, my FAVORITE part of the race (pictures coming up!)--My favorite people in the world- my husband and kids- were waiting for me at mile marker 14. Some of my other favorite people were there, as well; my dad, my brother and our friend Sean. Kenny had the bikes from work-- a quad bike (see my other blog for more on that) and The Ride and they were quite a sight to see. My hubby (in the hat), my dad and my 4-year-old son were riding the quad (our friend Sean hopped on the quad later). How cool is the double-sided flag??? My two-year-old is in the bike trailer with her cousin and my brother towed them with the cool Ride bike. 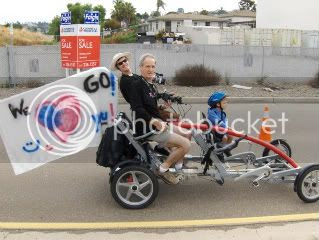 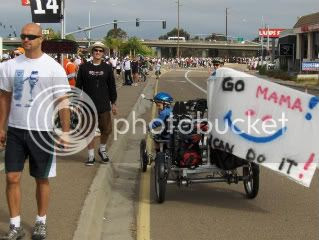 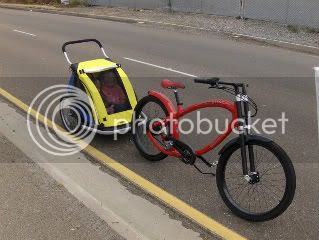 When I saw them, I screamed and ran toward them. 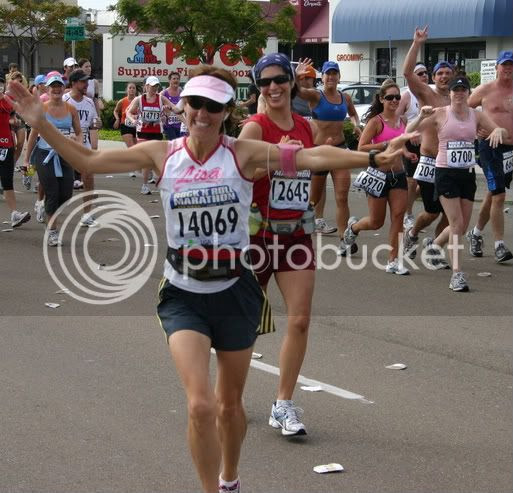 I was able to give my son a BIG hug. They rode alongside me for a half mile or so. My brother took a picture of me waving to Amelia who started crying when she saw me-- I think she wanted me to go to her. She calmed down once she saw the Mama was running! :-)
< 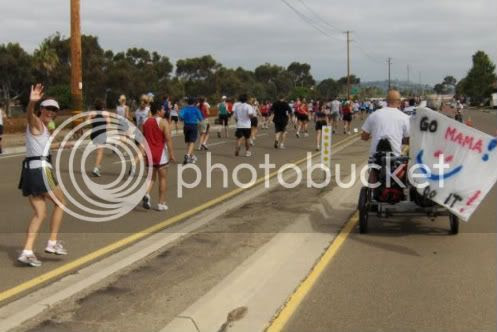 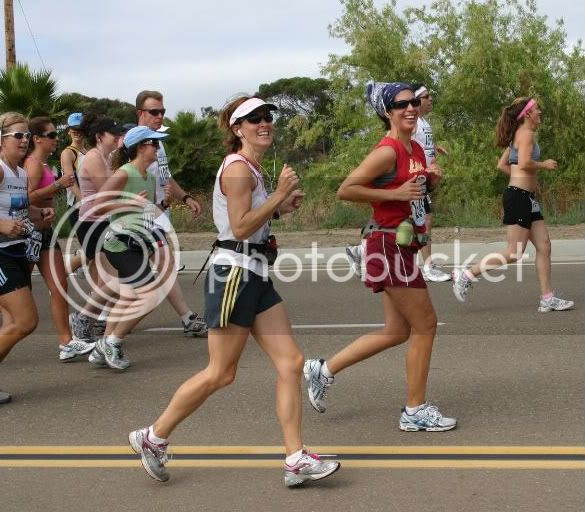 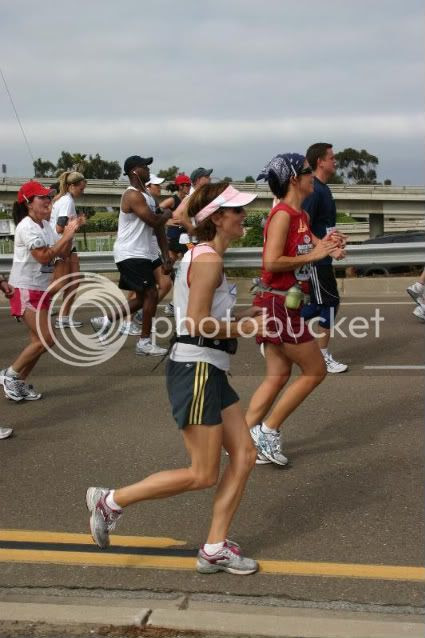 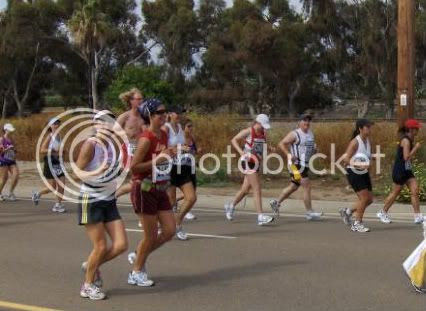 Even Lisa got a bit of a boost of energy from seeing my clan. I expended a lot of energy seeing them. But it was worth it. It gave me more energy for the miles to come.

I will write about the last part of the race later. Damn! It is taking me longer to write about the race than it actually took to run it! Sorry for all the details, but I want to document everything so I can remember it later. If one of my kids ever comes to me and wants to run their first marathon, I can let them read this.....

Lisa, those pictures are awesome. You say you are 40-something? Wow, you look amazing!

I started to tear up a bit when I saw your kid in one of those pictures - it looks and sounds like you have a great support system. I totally think you should do another marathon or at least a half!