A few weeks ago, I joined my brother, Jason, and his wife, Kristi, in the Gladiator Rock ‘N Run.  I thought the concept was good, but I was skeptical.  This was the inaugural race, and other concepts like this had mixed reviews.  My last mud run was a bit lame with the obstacles being things like traffic barriers and hoola hoops.  So I went in with low expectations, planning on having fun with my family and supporting my sis-in-law, who has never done something like this.  I was pleasantly surprised.  The Gladiator Rock ‘N Run was one of the most fun runs I have ever done!!

The concept comes from American Gladiator and is the brainchild of one of the original Gladiators, Dan “Nitro” Clark.  My brother is in the perfect demographic and watched it when he was a teenager.  The run involves running stairs, climbing over giant spools and walls, carrying heavy sacks, sliding down steep hills and, of course, lots and lots of mud.

The race was organized into half hour waves.  Brilliant!  It avoided the inevitable pileups at the obstacles and made parking a breeze.  We ran in the 10 AM wave and were able to see some of the previous waves run.  I love running races early, but my brother and sister-in-law are not early risers (at least on the weekends).  I was glad to run later on that day because it was pretty chilly.  For a race where you are going to get wet in December, 8 AM might not be quite as fun. 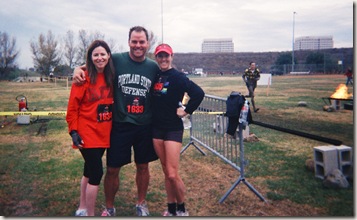 Here we are before the run, with finishers from an earlier wave in the background running through the fire. 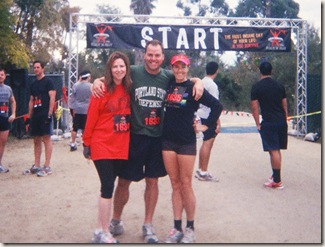 They had fun stuff to do around the finish/start area (in addition to the regular vendors etc.).  There was a jousting pit as well as a mud tug-of-war pit.  Had we had a big group, we would have been all over that! 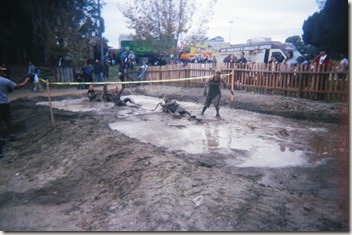 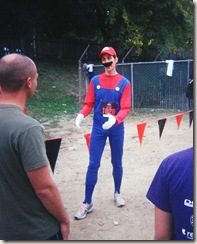 There were lots of fun costumes.
There were a few announcements and then our wave was off.  The first obstacle was running the stairs in the Verizon Wireless Amphitheater.  I really enjoyed it.  The stairs were a nice change from just running.  It really affects your heart rate differently.  They called that obstacle the “Stairway to Heaven.” 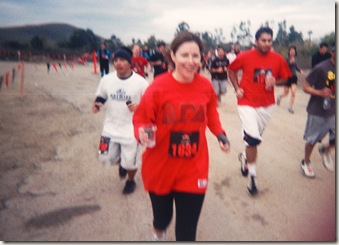 We ran through an obstacle called “The Wrecking Ball.”  Volunteers aimed hanging balls at us.  Some of them were thrown pretty hard.  One of the guys aimed right at my brother.  Mistake.  Having played college and pro football, he pushed the ball right back and almost knocked the guy over.  Hilarious. 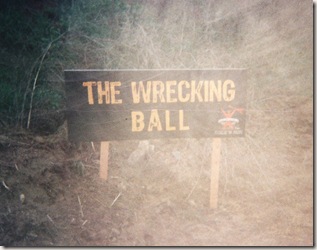 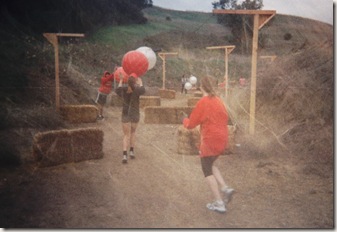 After that, we ran down a hill covered in tires.  My brother reverted to his twelve-year-old self and bounded down the pile of tires.  He would have made it all the way down, but had to zig when another runner zagged and the tire under his feet flipped out from under him and he fell HARD on his side.  By the end of the race, he was pretty battered and bruised.  BUT, he had a smile on his face the entire time.

*This photo was “stolen” from the Gladiator Facebook page.  They had their own photographers, in addition to the race photographers.
Next, we carried a heavy bags about 100 feet to place at the foot of a statue of Buddha.  They say that it was 50 pounds, but I don’t think there were 50 pound bags.  I think they were closer to 20.  After that, we had to run over giant spools.  I really wanted to be able to run up and over it, but in the end I had to put my foot on the side and climb it.  My brother ran over it. 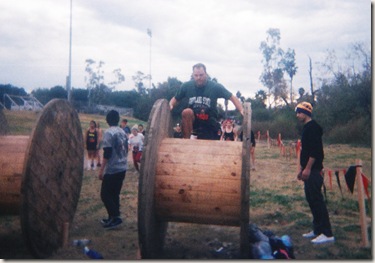 The next obstacle was a steep hill.  They had a big rope for people to pull themselves up called “Rope a Dope.”  It was easier for me just to run up the hill.  It was a bit muddy, but not slippery.  I passed a ton of people painstakingly pulling their way up the hill.

What goes up, must come down.  To get off that hill, we had to slide.  The other side of the hill was being sprayed by hoses.  They had it rigged so you could slow yourself down on a bale.  Of course, Jason slid all the way down.  Unfortunately, there was some gravel in that mud and he scraped up his side pretty good.  Once again, he was smiling while he did it. 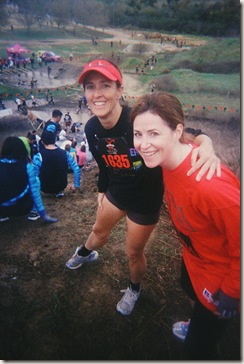 Kristi and I at the top of the mud hill.  Do you see the “Avateam” behind us?  They were a fun bunch of people who ran near us the whole race. 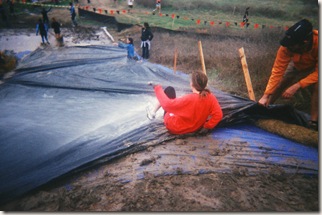 There goes Kristi!
We had to climb up a big wall.  This was as big as the walls at the Camp Pendleton Mud Run, without the cute Marines to help us over.  There were a couple of spots that had slats out for foot holds, but it wasn’t a no-brainer.


We also had to climb a cargo net over a trailer.  I enjoyed this one too. 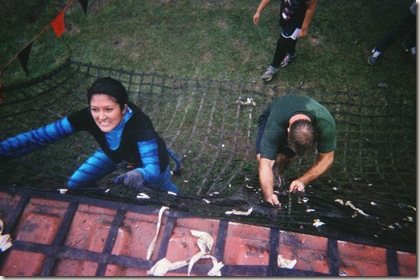 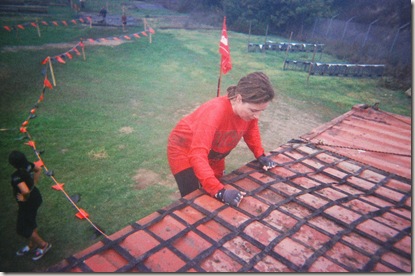 Then we hit the first mud pit.    This mud was the gooeyist, deepest mud I have been in.  I have run three mud runs prior to this and this was the best mud of all of them.  The LA Mud Run had a couple of inches, tops.  The Camp Pendleton Mud Run’s mud smelled bad.  The San Diego Mud was good, but more watery.  This mud was hard to crawl through, got EVERYWHERE and was cold.  It was hard not to smile and laugh, but when you did, mud splashed in your mouth.  ICK.  It was the perfect mix of mud and water and I have to hand it to the race organizers for not using mud with much gravel. 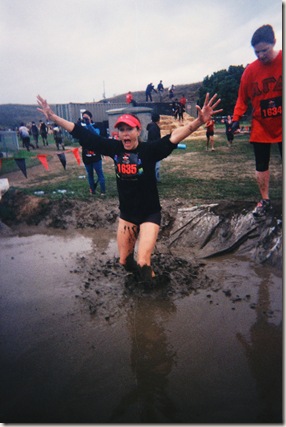 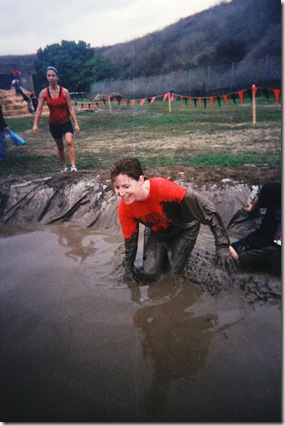 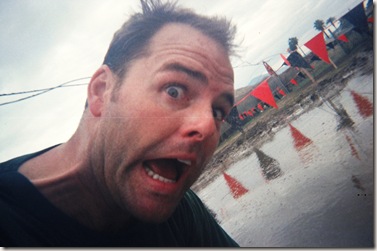 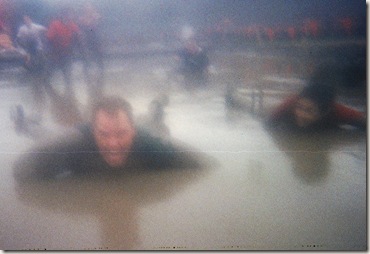 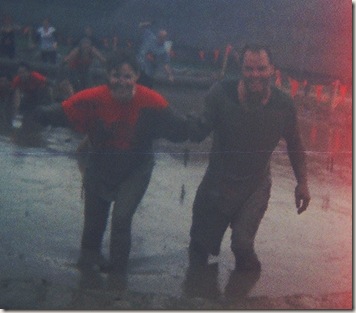 The camera got covered in mud.  It was difficult to find a clean spot to wipe it off.
The final obstacle was going over several small hills and then a final mud pit.  The last hill was steep and super muddy.  Getting up it was nearly impossible.  I had to dig my fingers into the mud and pull myself up.  I finally found my way up to the top.  I braced myself and reached down for Kristi.  I helped pull her up while Jason pushed from below.

The last thing to do was to run to the finish.  They had fire on either side of us.  The warmth felt good.  I would have rather jumped over fire, but it was still fun.  We ended the run holding hands and smiling.   Our little disposable camera was done, so we didn’t get an “after” picture until we got to the car.  We waited for a while for a picture in front of a green screen.  During the wait, our mud was drying and the temperature was dropping.  The best part of the wait was listening to a fun Ska band and chatting with other runners.

I was not wearing tights…my legs were just coated in mud.

The shower line was super long, so we changed our clothes in the parking lot and went home muddy.  It was actually good, because my kids got a kick out of seeing me so muddy.

In addition to such a fun run, the shirt is one of my favorite race shirts.  I have so many cotton race shirts that I never wear.  They are boxy, unflattering and boring.  The Gladiator shirts were in men’s or women’s styles, meaning that my shirt is cut for a woman and isn’t boxy.  It has a distressed look and is actually really cool. 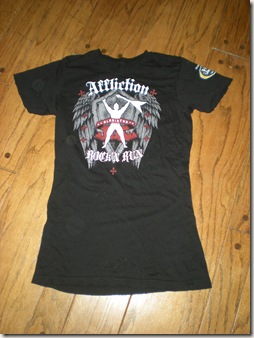 This was an inaugural event and I was surprised how well it went.  They could have had more porta-potties.  There were complaints about the number of showers, but there are never enough showers at a muddy event.  I really have to give a shout out to Generic Events, the race production company.  They consistently put on great events.

If I have to find anything negative about this race, I would say it was a bit on the expensive side.  I spent $65, which is really high for a three mile race.  The other thing is that I would have loved it to be longer!  There wasn’t much running. The last thing was that it was on the chilly side. We were wet and covered in mud and after a while I was COLD.  I know this has nothing to do with the race organization, but I can put it out there.   ;-)  Maybe they could have given us mylar blankets or something.

This race is scheduled to come back to Southern California in May.  I will definitely be signing up again.  I want to get a big group together and wear fun costumes.  Who’s with me??

i love it! looks like so much fun. the "avatar" team - that's creative. glad you had a good time!

Wow, that's an intense race - I'm so glad you had such a good time. I laughed when I read how your brother pushed the ball back, ha!

That shirt is very cute and I'm glad it is cut right.

Um, I can honestly say that I don't think I would do one of those races, sorry! But you always have such interesting race reports afterward! I remember the one you wrote when the mud was too filled with gravel. Yuck!

sounds like you all had fun, especially your brother, although it also does really sound like he was super beaten up by the end of it!!

That looks like SO much fun! I've always wanted to give the American Gladiators course a try, and this looks like a pretty good approximation.

As for the fee, I think you need to focus on the obstacles and stuff that made it much longer than it would have taken you for a 5K. Probably a lot more expensive to set up and run!

Looks like a great time! I've only done one mud run, but would love to to another!

Okay. You're the second person I know who gave this "race" a big thumbs up! Loos like I'll need to sign up come May!

Glad you had a good time. We'll be back bigger and badder Saturday May 7th. With any luck we'll have sunshine too!

Tell you brother to watch out. I'll be flingin' the "Wrecking Balls!"

Thank you for this race recap! It looks so fun! I'm looking to sign up for the Seattle one in late October and would assume that the race conditions will be similar to what you had.