I love Turkey Trots.  I ran my first one in 2008 and vowed to run a race every year on Thanksgiving.  The mood is festive; people are smiling and often in costume.  You get a huge sense of accomplishment, especially when you go for that piece of pie!  The Dana Point Turkey Trot is no exception.  It is a lot of fun and they offer a 10k, which is a bonus when many Thanksgiving races are 5K.  This was the second time running this race and it didn’t disappoint.

It was a chilly morning.  It was in the high thrities…BRRRRRR.  We were spending Thanksgiving with my inlaws again and they live just under a mile from the start line.  I ran down there and it was a nice warmup.  It was really cold and it felt good to get things moving.

I picked up my bib, shirt and goodie bag.  I was so glad that they had a bag check.  I wasn’t sure what I would do with my goodies if they didn’t have it.  As I waited to check my gear, I started regretting not bringing my own stuff from home to keep me warm.  It would have been nice to have a sweatshirt or something to check.  As it was, I was wearing a long sleeve shirt, capris (as my calves froze, I started to wish for my longer pants), arm warmers, a fleece vest and my trusty cheap Target gloves.  My outfit actually turned out to be just fine and by the end of the race, I had stashed my arm warmers and gloves in the back pocket of my vest.

After using the porta potty (with very short lines), I made my way to the start.  It was crowded, but I expected that.  Last year it was really packed and probably the most congested race I have run.  As I tried to make my way toward the front, I was stopped.  I was told that wave one was full and I would have to go with wave two.  No problem.  I would rather run in the front of wave two than the back of wave one.  I was thrilled that they started the runners in waves.  It was sort of random with no real signage or sense of organization, but I didn’t care.  It definitely cut down on the congestion of the race.  There is a spot in the first couple of miles that gets very narrow (it is split for returning runners).  It was really tough last year.  This year was so much better during that stretch.

I am always amazed how easy it is to run fast in the first few miles of a race.  When I try to run eight minute miles on my own, it feels like a Herculean effort.  In a race environment, it seems like the easiest thing in the world.  I was pleasantly surprised when I saw my first split comfortably under 8:00.  I had been fighting a nasty cold all week.  I skipped my runs on Tuesday and Wednesday because I was miserable.  I spent most of Tuesday on the couch.  Wednesday night, I was wondering if I could run the race the next morning.  As I cruised through this race, I wondered if I felt good because of adrenaline or if I had willed myself to be better.  If it was adrenaline alone, I would have felt worse later that day and I felt fine.  I honestly think I may have sweat it out during the race.

This is such a beautiful course.  It goes through Doheny State Beach and along the ocean towards Capistrano Beach.  We turn around and then head back to the Dana Point Harbor and go into the marina.  The course runs along a spit separating the harbor from the Pacific Ocean.  The only hills were on the bridge going over the harbor.  Did I mention there wasn’t a cloud in the sky? 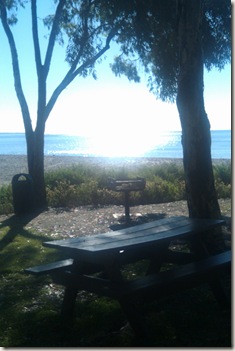 I felt pretty good throughout the race.  In the fifth mile, I started feeling a little tired, but I knew I was almost done and kept pushing.  I had an odd sensation going over the bridge the second time.  The sun was to my right, as well as the runners going into the harbor.  The shadows they made across my path made me dizzy!  I felt like I was on a treadmill or something.  I had to focus on the area ahead instead of the ground right in front of me or I started feeling a little disoriented.  Luckily, it is a short stretch and by the time I turned onto Harbor Drive, I was back to normal.

I didn’t pay all that much attention to my Garmin.  I looked down occasionally to make sure my splits were right around 8:00.  My goal was to break 50:00.  I should have paid closer attention.  I knew my splits were going to average under 8:00, however, I forgot about the inevitable extra mileage that I always run, especially on a crowded course with a lot of turns.  I wasn’t really looking at elapsed time.  Had I looked at that, I would have started my kick sooner.  I finished the race strong; I still had juice in the tank.  I remembered to stop my Garmin a few seconds after I crossed the finish line.  It said 50:03.  No!  Could I have stopped my Garmin 4 seconds after finishing?  It would be close.

I picked up my bag* and hung out a bit. I went to the results tent to see what my time really was.  I was hoping to see a 4 at the front of the number.  Alas, my time was 50:00!!!  One second?  That is all I needed to break 50:00??  So many things went through my head:  I could have started my kick earlier, I could have not walked those few steps at the water stop, I could have pushed it a little harder in the middle miles.  But the good news was that it was a PR! My last 10K on the 4th of July was 50:23  Twenty seconds isn’t a lot and the 4th of July race was a harder course, but I’ll take it!   A PR is a PR, especially when I didn’t really expect it.


I ran back to my inlaws’ house (making the total run a little over 8 miles) and spent the rest of the day with my family.  We went for a nice two mile walk down to the beach and enjoyed the beautiful day.  There was no wind and the surf was as calm as I had ever seen it.  It was still chilly (so we couldn’t take advantage of the lack of waves to swim), but it was super pleasant.  What a great way to spend Thanksgiving! 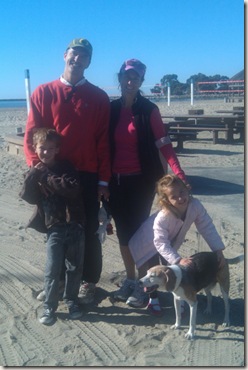 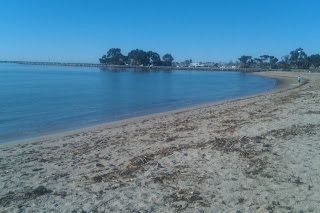 No, that isn't a lake or pond somewhere.  That is the beach mentioned in the Beach Boys' "Surfin' USA."  Not much surfing going on here.
Happy Running.


*The bag check was better than Long Beach, but still not the best.  We had to wait a bit to get our bags, but most spirits were pretty high and runners were patient.  I think I recognized one of the girls as having worked at Long Beach.  If so, that girl is brave.  I made sure to smile and thank all the volunteers.  It would suck to volunteer on Thanksgiving only to be treated badly by impatient runners.  I am not sure why it took longer than it should.  I think, in this case at least, their space was pretty small.  Although the bags were clearly divided by bib number, it took a while to dig through each bin to find the correct number.  At races where the bag pickup went fast, they had the bags spread out more so you had fewer bags to look through to find a specific bag.  The Rock-n-Roll events organize by last name and then by bib number.
Posted by Lisa at 4:58 PM

I know what you mean about it being a lot easy to start off fast when you've got that momentum around you.

Congratulations on your PR - even if you didn't break 50!

You gotta love short loo queues. Well done on the race. I think that a flat 50:00 is an amazing number to hit.

Oh man, I can't believe how close you came to breaking 50!! Well, next time, right? And great job on the PR :)

I've always been curious about arm warmers. Are they best when you only need one layer but it's a bit too chilly at the start for short sleeves and there's a possibility long sleeves will be too much by the time you finish?

congrats on the PR! it is hard to not think "gah i couldn't have pushed it for x more seconds" when you see your finish time, but i am glad you are reminding yourself to be proud.

Congratulations! I ran the DP Turkey Trot 5K this year but the 10K in 2008; you're right, it is a great way to start Thanksgiving:-)

Congrats on another great race and a PR! :) The waves seemed to work much better this year and yes, the same exact girl who worked bag check at Long Beach worked the bag check at the Turkey trot. She is my intern and we love her enough to put here there. She actually did a huge report on bag checks and how to improve our system and what to use for next year. The bag check was set up the EXACT same way as long beach. It works much better because there are much less people. Glad you joined us for another even and bummed I missed you at this one! :(

congrats on the pr!