I went to the expo yesterday to get my bib, shirt and goodies.  I didn’t feel particularly nervous until I was driving through Long Beach near the course (and at one point across the course).  As I recognized the area from two of my long training runs*, I felt my heart rate increase and that familiar feel of adrenaline rushing through me.  I feel it right now as I think about how at this time tomorrow, I will be halfway done with my fourth marathon.

The expo was great.  It was large enough to have plenty to look at and be worth driving all the way down there but not so big to be overwhelming.  The Rock and Roll San Diego expos that I have been to seemed almost too big.  The La Jolla Half Marathon, however, was an expo that was way too small (one or two vendors).  If you are required to pick up your bib before race day. the expo should be worth your while.  This one was perfect. 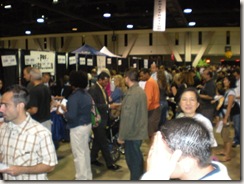 The lines were organized by bib number and moved pretty quickly.  The    volunteers were friendly**  I was able to pick up my bib as well as my friend, Stacey’s with no hassle. 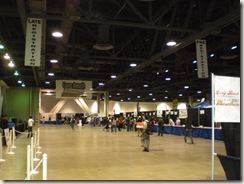 I stopped by the registration area to say hi to Danica.  I know how hard she has been working, but she had a huge smile on her face.  I knew that she was the face behind the marathon’s Facebook and Twitter accounts and I had asked her several questions about the race so far.  I thanked her for putting up with my pre-race neuroses.  She was super gracious and wished me luck on my BQ attempt.

The shirt is really nice.  I have seen previous Long Beach 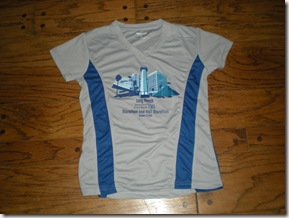 Marathon shirts and they are nice, but a simple white shirt.  This one is darker (making sports bra choice so much easier***) There is a darker  stripe down the side which is flattering.  It is nice to have something different.

I wandered around for a while, wishing I had unlimited funds for gear, shirts, shoes and trips.  The vendors were friendly and helpful.  I wasn’t a huge fan of the big booth for the time share.  Talk about hard sell!  They handed me a card to “swipe and win.”  As soon as I found out that it was a timeshare, I walked away.  That wasn’t so easy.  A guy saw me and started talking about how I could get these GREAT prizes for NO obligation, yada yada yada.  How could I turn down something for FREE?  My husband and I have a lot on our minds these days and taking time to get a sitter to go listen to a 90-minute presentation is not something we want to do.  He had a hard time taking no for an answer.

I was really impressed by the mile markers.  They had patients from the Miller Children’s Hospital do the artwork on the mile markers and were offering them in a silent auction to raise money.  Brilliant.  These mile markers were really neat.  If I had the room to display something like that, it would be so cool to have one! 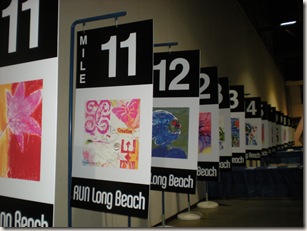 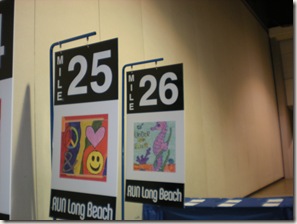 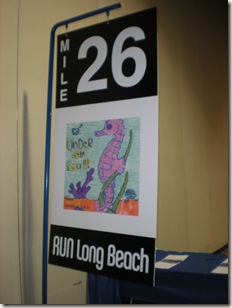 You all know that my race tomorrow is a big deal for me and I am taking it pretty seriously.  However, I want to have fun.  If I am so focused on my pace, race plan etc., how am I going to have fun?  So walking through the expo, I saw a way.  Add a little whimsy!  At first, I was going to walk by the Team Sparkle booth, but the gals in the booth were so nice and Danica was there as well.  She encouraged me to be a little spontaneous****  I decided to wear a bright pink sequined sparkle skirt during the race.  I love a little attention while running and when people cheer for my skirt, it will make me smile.  I know you aren’t supposed to try anything new on race day, but this skirt is super lightweight and is barely noticeable.  However, it is noticeable to everyone else! 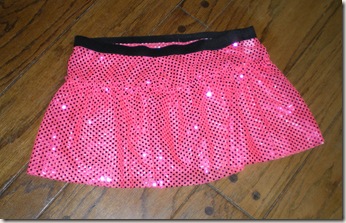 So now I have to figure out what top to wear.  The weather is supposed to be drizzly and in the 60’s.  I had planned on wearing a tank top, but will I be too cold?  I might go with a tank and my arm warmers. I am going to be pretty darn PINK. 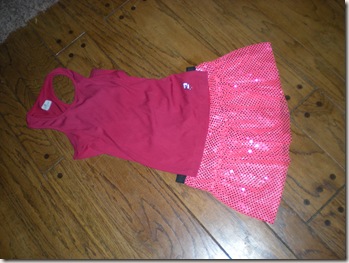 I had planned on wearing my Lucy shorts, but now that the weather is cooler, I wonder if I should go with my capris.  Decisions, decisions! 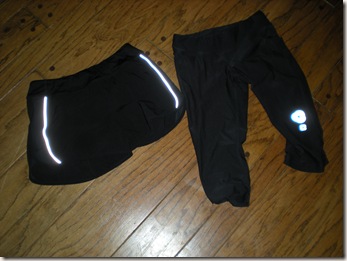 So the obsession has begun.  I am trying to get things laid out early since my last marathon was a crazy scramble the night before.  Thanks for all the supportive comments.  I will try to post something here as soon as possible.

Good luck to everyone running and racing this weekend!

*I was able to join my Team Jamba buddy, Nadine for two training runs with her running group AREC.  We ran eighteen and twenty-two miles through Long Beach where Nadine pointed out various sights, including which roads were on the marathon course.
**I was at the expo during the first hour, so everyone was still fresh.  They probably hadn’t had any psycho runners yell at them yet.  ;-)*
***There is nothing worse than digging through laundry finding a white sports bra so I can wear a particular white running top.
****This, coming from a girl who wore a pink tutu in one of her marathons.  ;-)
Posted by Lisa at 9:53 AM

I love that the mile markers have artwork by patients. That's such a nice idea.

Love the sparkle skirt! I may have to get one, my Team Challenge group is dressing in "costume" for our October 30 training!

I loved the mile markers, too. The frog was my favorite. ::grins::

i guess i'm weird... i've never cared what color my sports bra! heck i even wear them to work and not care what color it is there either :) lol.

good luck tomorrow! some of those race-details are awesome! (go danica and other organizers)