I mentioned in my last post that I hadn't run in two weeks. Well, two weekends ago I did other cardio that was REALLY fun and inspiring. My husband and I dropped the kids off with my brother and sister-in-law and drove to Moab, Utah for a fabulous mountain biking weekend.
He works for Ellsworth Bicycles and every year they host an "owners' weekend" for everyone who owns an Ellsworth bike. We went on two great rides and had some wonderful food prepared each night by Escape Adventures through the Moab Cyclery.
The first day was a good warmup for me. I am not much of a mountain biker. I rode in Monterey on a pretty tame single track in April for 12 miles. Before that, I had ridden about twelve years ago in and around Reno and Tahoe, but nothing very technical AT ALL. To be honest, I was really nervous. People were giving me all sorts of advice (the best of which was to remove the clips from my shoes and put "flats" on so I wouldn't be hooked to my bike). The first three miles was a climb and between the altitude and the flat pedals, I was WORKED. I was at the back of the pack. More than anything, I was pissed at myself for being such a wimp. I thought I was in good shape and all those bikers shouldn't have schooled me so badly. The turning point of the day came when I rode down a very steep rock face. It was one of those things where I looked at it and my brain said, "that is not supposed to be ridden down; gravity will not be my friend; where are the stairs???" After some coaching from some very experienced and helpful riders (one of Ellsworth's team riders, Pua*, was particularly helpful), I headed down, completely in control. My confidence soared. It was after that I chucked my ego out the window and said, "who cares if I am in the back of the pack as long as I am having fun!" I started really enjoying the scenery (and what scenery there was!!) and having fun on the slickrock**
The second day can best be described as EPIC. It started toward the end of the Kokapelli Trail, down through UPS (upper porcupine singletrack) to Porcupine Rim ending up at the Colorado River. Once again, I was nervous. One or two people actually seemed to discourage me from riding. But I'll be damned if I am driving eleven hours to ride for one day. Even if I had to get off my bike and walk, I was going on that ride. I did have to walk the bike in some spots, but I definitely wasn't the only one. There was one spot where one of the guides said to me, "if you ride down this part, I will give you my bike." He had a very expensive Ellsworth, so I didn't think it was a legitimate offer. I soon saw why he was able to say this. It was called "the notch" and it was literally a 50 foot vertical drop through various trees and roots. Everyone was carrying their bikes. I think only one or two of the local guides rode down that crazy thing. Heck, it was hard getting down with my bike because it was so steep.
It was a VERY difficult ride, but SO so so worth it. I felt such a huge sense of accomplishment when I finished. I know that Kenny's colleagues saw me in a new light after I rode that ride. At one point, one of his colleagues rode by me and said, "you kick ASS, Lisa." I quickly replied, "I DO kick ass!!" My skill level increased 100-fold that day. I was able to ride down six foot drops, navigate some windy single track and pretty much keep up with the group. Don't get me wrong... I had my moments. At one point I actually ran into a tree and drew some blood. It was a little badge of honor ;-)
I spent most of the day with one of Kenny's coworkers, Aimee. She and I were at somewhat similar skill levels. She's a better rider than I, but she wasn't as experienced as the next group up. I was able to keep up with her for the most part. We really encouraged each other. Throughout the day, confidence levels went up and down. A drop over boulders in one section would seem insurmountable when we had done the same kind of drop an hour earlier. Sometimes we both walked and other times we encouraged each other to go for it. I would not have had as much fun if it wasn't for her. My husband, while supportive, tends to want to play with the other boys. He likes to go down crazy drops and jumps and pretend he is twenty years younger. If I had ridden with him the entire time, I would have felt like I was holding him back. Plus... I don't really like to see him do that stuff. It makes me nervous.
The mountain biking was SO MUCH FUN. It involved skill and endurance and really made me work. As a reward I saw some of the best scenery of my life. The pictures do not do it justice. I would really like to do more of it. But the problem is, it isn't that fun all by yourself. For Kenny and I to go for a ride, we would have to get a sitter for the kids. They are much too little for that kind of thing. I am thinking that if I do a triathlon, I would like to do one of the XTerra Series that has a mountain bike race instead of road race. I am hooked.
Here are a few pictures from our weekend. 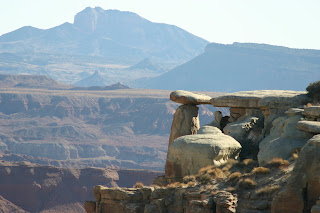 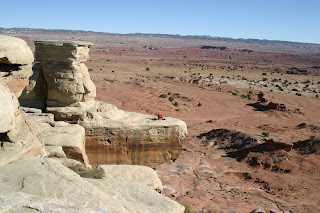 We stopped at a viewpoint on our drive to Utah... incredible. 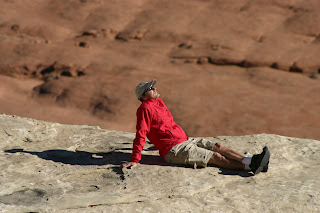 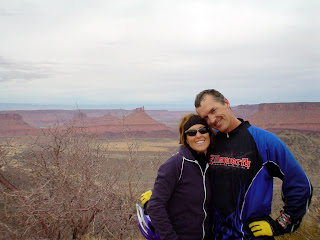 Kenny and I around the halfway point of Sunday's ride just before Porcupine Rim. 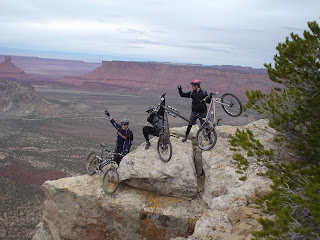 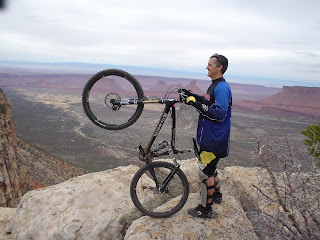 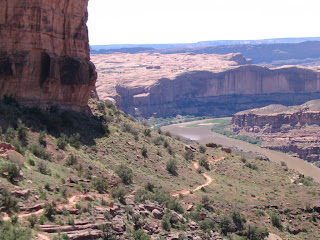 This is a picture of the Colorado River from Porcupine Rim. I didn't take this picture (hubby had the camera) so I found it online *blush* I wanted to show how incredible the view was. See that tiny little trail winding toward the gorge? Yup. That's the trail. [photo courtesy of an online Picasa web album from a guy named Andrew ;-)]

*Pua Sawicki is a serious stud. She not only wins 12 and 24 hour endurance races, she runs away with them. When you meet her you would never guess she is a hard core athlete. She is sweet and down-to-earth. I was pretty excited when she told me how proud she was of my performance that day. I felt honored to have ridden with her (actually behind her quite a ways).
*"Slickrock" is the term used for ancient, weathered, and sculpted sandstone, of the type found in parts of Utah. But it's not actually slick; your mountain bike tires will stick right to it. Which is why mountain bikers love areas such as Moab, where the most famous ride is named Slickrock.
Posted by Lisa at 3:53 PM

Lisa you definitely DO kick ass!!! I was in awe of you before, running marathons and all, but now you just took it to a whole other level! You are such an amazing woman and what a great role model for Amelia. She'll be able to look up to you for many reasons one of which is the passionate way you live your life. The goals you set for yourself and then attain inspire me greatly. I am so proud and honored to call you my friend!

Now those pictures are what make me miss the Southwest - wow!! I can't believe you did all of that, you are my hero.

Now you're thinking of a triathlon?!

Glad you had a good trip away!

Gorgeous pictures! And what an amazing adventure. I really admire your bravery!

Wow, Lisa! You are SO brave! Oh my gosh, I was nervous just READING about your adventure . . . I am seriously impressed and so glad you had such a wonderful trip!