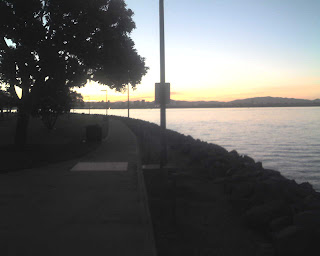 I have to say that I think that today's run was the second hardest thing I have ever done. Ironically, they both took about 2 hours 45 minutes. The hardest thing, pushing for nearly three hours while delivering my 9lb 9oz first born, had a beautiful baby as a reward at the end. My only reward today was a case of the runs and sore muscles :-P

We ran a beautiful 16 mile out-and-back along the San Diego Harbor. It started well. It was a gorgeous sunrise over the city skyline and the water was still and beautiful. I felt a little stiff, but was confident that I would loosen up. Even at eight miles I was feeling ok--not great, but ok. My ankle was starting to give me some pain along the side. Soon after the halfway point, something got into Laura and she took off running. Lisa and I knew better than to try to keep up with her, although we have each done so in the past. At Seaport Village (maybe mile 10 or so?) we saw her stop at a water fountain, drink and stretch. She was a couple hundred yards ahead of us. We didn't see her again until the end. When Lisa asked me if we could stop at the same fountain to stretch, I quickly agreed. My ankle was becoming increasingly painful and the rest of my legs were starting to tighten up pretty good. The stretching helped a lot (especially the pain in my ankle, which subsided quite a bit).

I just couldn't seem to get into a good rhythm. Lisa and I turned up our music and ran without talking for a while. We were both running pretty labored. I could tell she was starting to hurt too. By mile 12, I felt sore and knew I was having one of my worst runs, but I still thought that all was ok. I said out loud, "I can do anything for forty minutes!" That didn't seem to inspire Lisa much. I think I heard her sigh (or groan?) above my music. We stopped one more time to stretch around there somewhere. It didn't help as much as the other times.

Between mile 13 and 14, Lisa told me that she thought she was going to have to walk a bit. I knew that if I stopped at this point, I would never start again. I told her that I needed to keep running. When she slowed to a walk, I waved to her and kept going. Everything in my body was telling me to stop. By this point, I was feeling REALLY bad. By the time I hit mile 14, I was wondering if I was going to finish. I thought at one point that I had run farther than I had ever run and that should count for something. Did I really need to add two miles on to last week's run?

During mile 15 and 16, my legs were hurting from my hips to my ankles. There wasn't one specific thing I could point to that was bugging me. They just HURT. I remember checking my Nike+ at one point and nearly crying when the lady told me that I had 1.25 miles to go. At that point, my pace was over 11 minutes/mile. I am not sure I could have gone any faster. I hit my powersong at 15.35 miles and it didn't really move me much faster, but it kept me moving.

I ran into Laura, who had finished well ahead of us (she averaged approx. 9:10 on the way back) walking back my way. She ran with me the last quarter mile. I could carry on a conversation... but my legs were absolutely killing me. By the time I finished, they hurt worse than they ever have. I thought we were going to have to get in the car and get Lisa, but she came running up a minute or two after me. We were totally cheering her in! Way to go! She walked for about a half mile and then pushed herself to start running again.

I have a theory on why my legs were bothering me so much. I treated myself to a massage yesterday for my birthday. I had a SpaFinder gift certificate and decided to relax after a rough week. I knew that a deep tissue wouldn't be good, so I opted for the hot stone massage. It felt HEAVENLY. It was just what I needed. However... apparently, massages release certain toxins out of the muscles. That is why they tell you to drink plenty of water to help flush it out. I think that it must take more than one day to do that. Many people say that you don't feel the benefits of a massage until four days after it. Jen warned me. Her massage therapist told her that if you run the day after a massage, you won't feel your best. I thought that I had pounded tons of fluids yesterday, but apparently not enough.

I was actually afraid to get in the car to drive home because I thought I might not be able to move. We decided to go get some coffee and a bagel at Panera. That was the best decision we made all day! I inhaled my bagel and cream cheese and had an iced latte with it. Afterwards, we all felt 100% better. My legs didn't hurt anymore. Well, at least no more than your typical soreness after a long run. I feel pretty stiff now, but I think I'll be fine.

So....I was hoping for a stellar run on the last day of my 41st year. It didn't happen. I felt every bit of my age today. Part of me wonders if it is the universe keeping me from getting overconfident (see my last post). So be it. I am humbled. I just hope that I bounce back next week....
.
edited to add: A major bummer today was the fact that Jen is sick again. She had to miss our run which totally KILLED her. She told me that she didn't know which was worse- the physical or the emotional pain. I really hope she bounces back SOON.
Posted by Lisa at 11:51 AM

I have been thinking about you and "the running crew" that I just had to check in and see how it went. You are awesome!!!! I am sure you are over it but do not worry about how rough you felt while running this weekend because it is only "one day." The day I saw you at Mission Bay was a horrible run and the last three or so have been great. Buying two pairs of new shoes might have helped. :)

Hey Lisa, Hilly here! Happy belated birthday! Don't be hard on yourself, think of it this way, did you think a year ago you would be doing what you did on your birthday a year later???? You accomplished a lot and yes, the massage probably did not help; I bet you were plenty hydrated. I am proud of you! You go girl!!!!!!