Running is a nearly universal language. It breaks the ice and brings people together. If two strangers are runners, they can usually find something to talk about. Being a running mother gives us even more in common.

This past weekend I found this to be true. Twice.

We went camping with a group from Fort Collins and spent all day Saturday on a pontoon boat out on a lake. I was the newbie of the group and I spent a lot of time getting to know everyone. One of the women approached me and said, "I hear you are a runner." We got to talking (and talked on and off most of the day) and I found out that she runs half marathons. I did a little happy dance inside. Perhaps a new long run partner?  I practically begged her to invite me along to a long run. I cyber-stalked her and found her on Facebook and I am hopeful that we will run sometime soon. 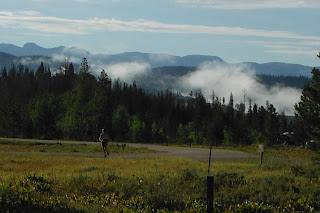 That morning, I had noticed a woman going off for a run. She was carrying water, so I knew it was going to be a long one. Other than feeling a bit guilty for skipping a long run that day, I was curious where she was going to go. So enamored am I with other running moms that I snapped a picture of this anonymous woman leaving her children for some peaceful time in the mountains.

Later that afternoon, I walked into her campsite and asked her where she ran.  She and I started talking about running and races (she is a marathoner and training for a 50K). We both lamented that we hadn't spoken the day before and we could have run together. Later, she walked into our campsite with a map and showed me some places to run. On Sunday, I set off on my solo run (which was fabulous, by the way). She asked about it afterward and we chatted some more. As both of our families were leaving, we exchanged information. She doesn't live particularly close to me, but we both thought we might run into each other at a Colorado or Utah race sometime.

With women, running opens the door and gives us an opportunity to become friends with people we wouldn't necessarily get to know in any other way. Last weekend reminded me again what a wonderful community I belong to. Runners are great and runners who are moms are awesome.  It gives me hope that I will find common ground with some local running moms in my neighborhood.  It is only a matter of time.

This is what I want! I want to find common ground with other local runners and it is driving me crazy that I haven't done so yet. I found you from Runninghood. Amanda and I ran together in College. I want that running group back!!!

can i runit is the most commonly used phrase for any application, games, software etc