Last Saturday, we had a great long run down at the beach.  The weather was still uncharacteristically cool and the sun didn’t come out at the beach our entire run.  I had twenty on my schedule, but Kelly and Joan wanted to do eighteen.  I took the long way to get to Kelly’s house before driving to the pier and gave myself almost a two mile head start.  We ended up running nineteen, giving me twenty one for the day!  We ran up to “the water tower.”  I had never been on this run, but it was obvious where our turnaround spot was.  The crazy thing is that the water tower is an actual home!  They apparently live up in the round part of the tower.  Cool! 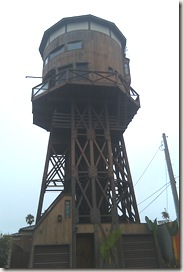 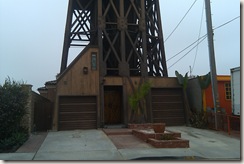 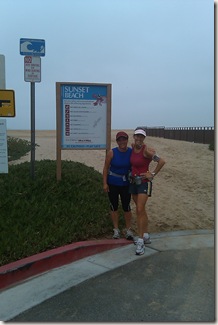 That Tuesday, I met Joan for a run in the trails.  She had shown me a fabulous trail off Weir Canyon the week before and I was eager to run it again.  It has a lot of hills and mostly single track.  At one point, we ran through a tunnel under a road.  I don't mean an underpass, but an honest-to-goodness tunnel.  At one point we couldn’t see our feet, even though we could see the light coming through the other end.  Trippy. 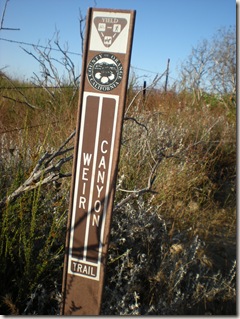 Joan realized that trails don’t scare me.  I don’t worry about getting lost and am willing to try a new one if it means finding a fun new route.  She asked if I wanted to try a trail she had always wanted to explore, but didn’t want to do it alone.  Of course I would!  From this point on, we explored the area, trying new trails and some areas that weren’t even trails.  We battled overgrown brush and even some giant spiders.  Yuck!

At one point, we looked up at the top of the hill and saw a deer.  We stopped and tried to wait for him to run down the hill, but he/she saw us and was willing to wait us out.  I am glad that the deer is as far as the wild life got that day.  We were out a bit later than normal and the sun was really starting to get hot.  I was very worried about seeing a snake (I HATE SNAKES), and thank goodness I didn’t.

I met Marci last Wednesday for an eight miles tempo run.  We did a good job of keeping our pace faster than marathon pace (8:45), but not quite to half marathon pace (a little over 8:00).  Most of our tempo miles were right around 8:30.  It felt good to work a little harder and remind my legs how to run a bit faster.   We ran through a neighborhood that had a lot of horse properties.  Every other house or so had a stable or corral and horses.  I was taken by surprise when I saw a ZEBRA! 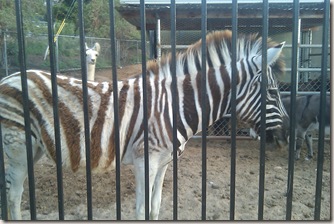 You can see his buddy the llama (or alpaca) coming up behind him.  These people also had an ostrich, a pot-bellied pig, more llamas and a bunch of donkeys.   You really don’t see that every day!

We have run a couple times in the last week into the Boy Scout camp just past Irvine Park.  It is a great hilly run with a lot to see.  How beautiful is this run?? 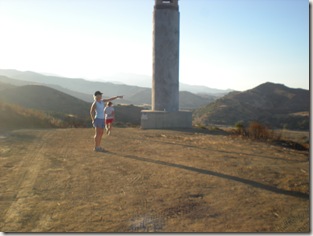 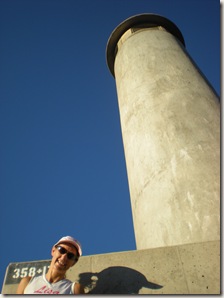 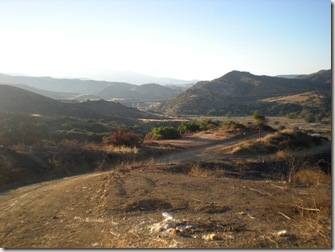 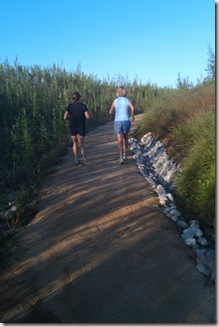 Yesterday, we saw a different kind of critter.  No deer or even coyotes were spotted.  Just an incredibly creepy crawly. 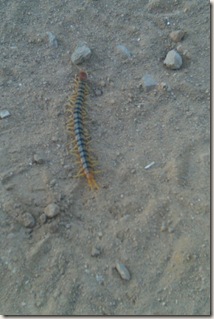 Joan put her hand down to give reference to show how big this thing was.  Ewwwwww. 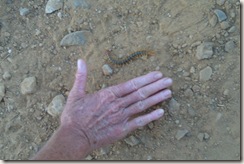 And, of course, we run our beloved Santiago Creek at least once a week.  I never get tired of this place to run.  Now that we have branched out and tried new trails from this route, I know I’ll never get bored here.  There are so many trails and so many kinds of terrain. 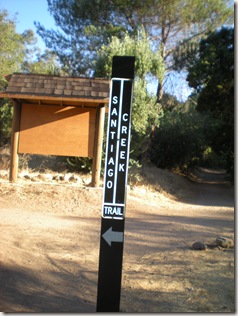 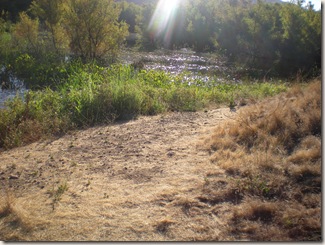 In the middle of all these great runs was a little race called the LA Mud Run.  I will post a race report soon.  I still have to get the pictures developed, and that is something I am not used to doing.  I ran with a disposable water proof camera so I am hoping for some fun muddy pictures.

I am so lucky to live so close to such fabulous places to run.  Add all the wonderful people I have met to run with, this is turning out to be a great training cycle!

That's a big centipede. We get those out here too. Inside the house sometimes. Yuck

That is so cool that they live on top of that tower!

That giant wiggly thing scared the crap out of me. I don't think I could get my hand that close to it for fear it would leap out and touch me and then I'd die from fear.

You have some great places to run! I envy that.

coolest house ever! great trail pics - but i would NOT do well with centipede-thingies, spiders and especially not snakes. i am the biggest wimp :)

What interesting places to run! I want to start running on trails soon...I'm never afraid of getting lost either so I think I'd like it!

AK! more evidence about why I stay away from trails...creepy crawly things and wildlife (ok deer aren't really scary, but still).

Thanks for the nice words on my blog. Don't worry. I'm not going anywhere.

I really admire how you just crank out the mileage. I aspire to do that, to have a midweek eight-mile tempo run.

Great job on your runs. They're very motivating.

I've been a bad blogger as well-work occupies so many hours!

I know you've gotten some good runs in-hope to see you at some races soon!!!

Nice photo essay on the trails of Northern OC! I didn't know that centipedes existed around these parts!

Ok, one, wow, your friend is brave to put her hand that close to that thing. You would NOT catch me doing that!!

Second, your trails near you are so awesome - you are not constantly covered by trees like we are here, which I think is part of what scares me about running them, and getting lost. I feel better/more secure out in the open like your trails are out west. does that make sense?

lisa, your speed always amazes me. you run at paces I can only keep up for short distances like 5Ks.

sorry to be MIA. I'm catching up with lots of my blogging peeps this morning and really enjoying reading what everyone has been up to.

What a fun run! I need to come visit you so you can show me these awesome trails! I'm glad you didn't see any snakes. That centepeed is ugly, but I'd much rather come across that than a snake. That is so cool that people live in that water tower. Thanks for the photos, I felt like I was running along with you!

I like the place so cool and the animals are so cute. The pictures are awesome, nice run there!!!!