I really need a checklist for these early mornings...

I forgot to plug my Nike+ receiver into my iPod!!! I grabbed the iPod and headphones and left the receiver sitting by the computer. For those of you unfamiliar with the Nike+ system, you need the sensor on/in your shoe and the receiver connected to your iPod. What this means is that the entire run won't be logged in my totals!! I am SO bummed! I didn't really need the real-time updates today, because we had a good map for the distance we went and I wasn't concerned about the pace. BUT... I have logged over 260 miles and to miss 18 is HUGE. Wah! That is my whine for the day.

On to discussing today's run.... We ran 18 miles in a little over three hours. We stopped a couple of times to stretch etc. so our pace is right on. My run was not nearly as good as Monday's 17 miles, but not nearly as bad as the 16 miler three weeks ago. I had more aches and pains in the latter half than I would have liked, but I finished relatively strong. My shin/calf started out with a little discomfort, but I barely noticed it later in the run because other parts of my legs were hurting. My legs started aching all over again and I am wondering if it has something to do with nutrition. I tried to eat a bit more yesterday and push the fluids, but I don't know... 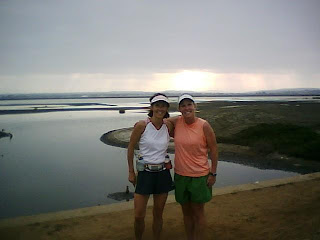 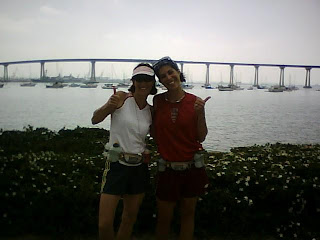 Laura and Lisa had decent runs today, too. Laura finally seems healthy and is back to her old pace (I actually ran ahead of her on Thursday's run for the first time... which isn't fair since she had a sinus infection). She commented that she doubts she could have done that pace for an additional eight miles and thinks she should hold back at the 10-minute-mile pace for a bit longer to conserve her energy for later. Lisa struggled through some knee pain, but finished strong after a couple of stretching stops. She said that she knew she could have finished a marathon today....even if it meant walking a couple of miles and running the last few. The first picture was taken with Lisa's phone at 9 miles. The second one was after we finished with the Coronado bridge in the background. I LOVE getting such an early start and having these beautiful early morning shots. It helps that we have the gorgeous terrain of San Diego to run through....

I think I am done with long out-and-backs. The last stretch is a killer every time. I would much rather do a loop. Today we ran the Silver Strand http://members.cox.net/sd_run_maps/SStrand2.GIF We started at Tidelands Park under the Coronado bridge and ran along Glorieta Bay down the Strand to Imperial Beach. It was a nice enough run, but it was less ocean than I had imagined, since we ran on the East side of the highway and the ocean was often behind a fence on the other side of the road. The last couple of miles were tough as I was recognizing landmarks and realizing that we had a ways to go.

Could I have done 26 today? I'm not sure. I know I could have done twenty. I bet the adrenaline of the race will help to push me to those last few miles. Did I think I could ever run 18 when I started this whole thing? Heck no. It's pretty cool how far we've come.
Posted by Lisa at 12:39 PM

Reading about how far you have come makes me feel like I can do the marathon I just signed up for too! Thank you for being inspiring! (Your pictures are just beautiful by the way.)

By the way, thank you for linking to my blog on yours. Wow!

Thanks for leaving a comment! It makes me feel loved ;-)
I love reading running blogs from people like me-- regular people with regular lives. I like to read about elite athletes, but I just can't relate because I will never be there. That is why I link to blogs like yours...

MapMyRun is hit and miss. I tried it with Sunday's run and gave up after much frustration (the "out-and-back" feature seems useless)

Congrats on signing up for a marathon, btw!