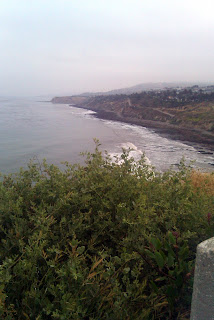 This was a last minute race for me.  I had been thinking about it for a while.  I have it penciled into my schedule as a possible race.  I decided to run it sometime on Thursday because I knew I needed to get a good, solid long run in and wasn’t sure I had the motivation to do it by myself.  I didn’t register, but knew that they had race day registration available.  Then I received a text from Rod that he, Jeff and Joan were running it and would I like to ride with them.  Yippee!!  I was excited that I didn’t have to drive 45 minutes by myself and hang out for an hour before the race. 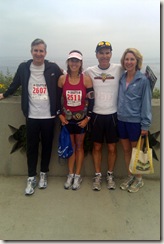 We met at 5:30 to drive down there.  It was chilly, but not cold. I ended up wearing a tank top, my arm warmers and shorts and was completely comfortable throughout the race.  It stayed overcast in the upper 50’s the entire time.  Perfect running weather.

I started out running with Rod.  We have very similar PR’s, but he is just 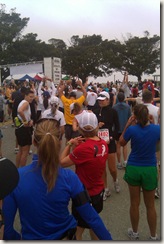 faster than I am.  I knew that we could definitely push each other.  It was a bit crowded in the beginning where we had to walk for a bit until it opened up, but we got into a rhythm fairly soon.  We went out faster than I normally would, but I thought that I might be able to keep it up.  Could I get a PR?  Hmmm…   Rod offered to slow down when I commented that our first mile was 8:13 (even with the slow start), but I wanted to see what we could do.

The second mile started to climb, but we kept pushing the pace.  We kept up our pace and were average under my PR pace of 8:19.  We ran the second mile in 8:23.

But that is when it started to get steep; really steep.  I wasn’t even really warmed up (it often takes me a few miles to really feel warmed up) and the course turned on to Western Ave which was quite a climb.  I knew I needed to slow down.  My pace slowed down closer to ten minute miles.  I saw Rod start to get ahead of me.  I knew we had over ten miles to go and I didn’t want to kill myself by trying to keep up with him.  As I saw him get farther up the hill ahead of me, I hoped I could catch him toward the end. At the very top, I stopped briefly at the water station, even though I was carrying my own water.  I gave myself permission to stop to gather myself before continuing on. Mile three was 9:42, the slowest of the day. 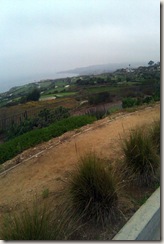 The course then flattened out for a bit.  That next mile was full of rolling hills, which weren’t nearly as bad.  The scenery was wonderful and I even pulled my phone out to snap a picture.  That is Trump National Golf Course in the distance.  I ran mile four in 8:26.


Then we hit the longest downhill of the day.  It felt great, except for the fact that I knew that I would have to come up that hill toward the end of the race.  I really wanted to take advantage of that downhill, however, to bank some time.  Mile five was the fastest of the day: 7:41—woo hoo!

It continued with the gradual downhill for close to another mile.  That was followed with some steep, short rollers.  The turn-around came and I had to do those rollers again.  Mile six and seven were 8:17 and 8:20.

I’ve decided that I actually like out-and-back courses. but only when I am running with other people.  I love being able to see all my friends.  I was able to see Jeff, who was about ten minutes ahead of me.  I saw that Rod was a couple minutes ahead of me and Joan was about ten minutes behind me.  I also was able to see Penny and give her a high five.  During the time before and after the turn-around, looking for my friends was a great distraction from running.

Miles eight, nine and ten slowed down again (8:54, 9:38 and 9:13) as the course went back up the hill (remember those zippy miles in miles five, six and seven?).  At the end of mile nine (the second slowest of the race) I could see the top of the long incline (so I thought).  I told myself that I would have my last Gu at the top.  When I reached the point, I discovered that it was merely a turn in the road and it continued up for another half mile!  Holy hell!  Why didn’t I pay more attention on the way down???

The last three miles were mostly downhill (8:25, 7:50 and 8:33).  The steep hill on Western Avenue wasn’t as fun as I thought it would be (although, I did haul some booty with a sub-8 mile.  woo hoo!).  While I am getting better at the downhills, at the end of a tough run, I felt like my feet were pounding the pavement.  Even though another runner warned me earlier, I completely forgot that the race started with a gradual decline (maybe that is why that first mile was so fast).  Well, during the last mile of a hard-run half marathon, an incline, even a gradual one, is disheartening.  I like to put on the gas during the last mile of a race, but that last bit felt really hard.  When I finally saw the finish I gave it everything I had.  I saw Jeff on the sideline cheering me in and I gave my last bit of steam to cross the finish.  I had the volunteer tear off the bottom of my bib, since I couldn’t even get my hands to work. 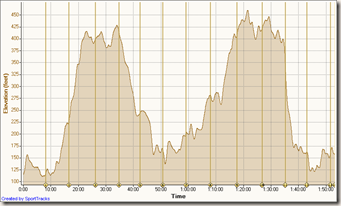 Palos Verdes elevation profile
This was one of the hardest races I have run.  The trail races* are technically harder, but there is so much less pressure to run fast (and therefore, I ran them an hour slower). This was very similar to La Jolla Half in terms of hill climbing.  La Jolla has a longer hill, and this one has two big hills.  I’ve looked at the elevation profiles and can’t tell which one is more difficult.  Either way, I am happy to have run this one three minutes faster than La Jolla, which I ran in 1:56:39.  I am happy to be only four minutes off my half marathon PR (1:49) on a course like this.  In fact, I have only run two half marathons faster than I did on Saturday (Carlsbad and Southern California). 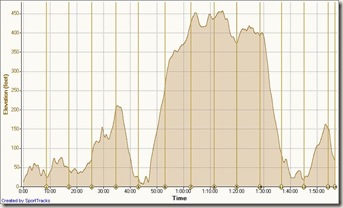 Despite the difficulty of the course, I can definitely see myself doing this race again.  I actually enjoyed it and felt a sense of accomplishment after finishing strong.
Once again, thanks for reading.  And happy running...
*Malibu Creek 22K, Malibu Creek 25K, and the Winter Trail Series 21K races had insane elevation profiles and rough terrain.
Posted by Lisa at 7:55 PM

Congrats on an awesome race Lisa! I envy your race scenery there in CA. Chicago races can offer some good views of the Lake and the skyline, but are suburban race scenery is eh. Good job!

Not bad at all. You've seemed to have recovered from your downtime and are now kicking some major butt once more! 1:53 is such a good time, even if it isn't your PR.

Thank you for your wonderful efforts

Nice run and thanks for your post. I was there for the half as well (finished right around 1:50) and I was interested in your split times. Some of the mile markers seemed way off to me. Anyhow, good job on a tough course!

Looking at that elevation graph I'd just like to say - Wow, tough race! Well done.

Hmm. That elecvationprofile iswhy I haven't (and probably won't) run this race! Yikes!

Great job on a tough course.

Thank you very much